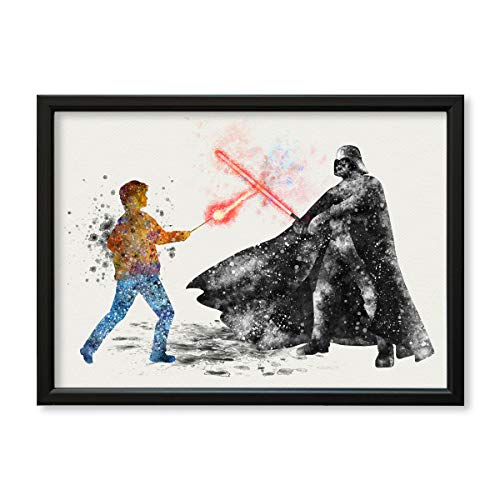 The Harry Potter and Star Wars franchises are two of the most famous icons, known by all ages. The two series have been reigning over the global platform, even years after its release.

If you are here, you would know how these franchises have infiltrated every cornerstone and inch of every industry. From theme parks and customized things to collectibles and cosplay ideas that we all treasure so dearly.

We are victims of the craziness that surrounds these pop culture icons. But the real dilemma occurs when there is a battle amongst the fandoms. When there is a crossover, exciting theories are brought onto social media platforms for further discussion.

The question that we would like to baffle your minds with today is what could happen if the two faced off, who would remain victorious?

What would win: a wand or a lightsaber?

The magical weapons and equipment that exist in our favorite sci-fi and fantasy stories are some of the nicest things about them; weapons we wish we possessed in our own life.

How could our favorite heroes battle their way through the hardships and tribulations of being sci-fi legends, without these specific weapons?

Today, we’d want to discuss the following topics: Which weapon would be the most effective in a fight? LIGHTSABER VS WAND? Two of the most famous weapons against each other.

How are they made?

Wands and lightsabers, like all weapons, are always crafted. Ollivander, for example, is a devoted wizard who creates wands and fulfills the dreams of any wizard or witch that may enter his shop in Diagon Alley.

Wand making is a tough yet rewarding skill that only a few people have. Much goes into these weapons, after all.  Every part comes from rare components, and the core of every wand is different in terms of where it comes from.

But the wand chooses the wizard, after all. And that, in itself, makes them extremely special to whoever gets chosen.

If we talk about the lightsaber, a Jedi must find their Kyber Crystal to even think of building a lightsaber. This alone is a difficult duty for any Jedi. The journey to the Crystal Caves on Ilum is an important rite of passage in the Jedi Order.

The task of making the hilt, on the other hand, appears to be significantly less complicated, needing pieces that are not too tough to come by. As a result, wands appear to be more difficult and mysterious to construct.

Who can use them?

This is an intriguing subject to think about. Are there any constraints on who can and cannot use these weapons in terms of their impartial aspect?

Wands, on the other hand, are a completely different story. After the wand chooses a witch or wizard, the wand can only be used by that specific magician.

There are minimal limits on acquiring and using your wand if you are a witch or magician. Any member of this group is entitled to have their own. However, one wand cannot simply be used by another wizard unless acquired by the disarming charm on the opponent.

Can you distinguish between individual wands and lightsabers?

This is an interesting conflict that we can discuss here. Can we distinguish the wands and lightsabers based on their appearance?

All of the wands are custom-made to reflect the user’s personality. There are phoenix feathers, unicorn hairs, and dragon tails involved in its making but only a true wandmaker can differentiate between different wands.

And while every wand has its own unique shape or design, different wands can only be told apart when they are super close to the person who is inspecting them.

Lightsabers, on the other hand, are a little more straightforward. Red lightsabers are almost exclusively utilized by the Sith, whereas the Jedi employ green or blue lightsabers.

Which has a unique design?

Lightsabers all have fundamental trademarks that are commonly similar. Lightsabers are beautifully built, aesthetic, and colored energy blades that appear as swords.

On the other hand, Wands appear to have had a little less design involvement in their appearance. They are just chopped wood at the end of the day.

Their engravings, handles, and marks allow for more creative expression, but you might not get the same response if you display them on the wall.

So, lightsabers, with the fact that every Jedi makes them according to their own needs and design preferences, will take this round without any question.

Which of them is more dangerous?

If you consider wands as a weapon, it might be a powerful tool as wizards are equipped with wands as their only protective sheath. But wands are more than just weapons. They are mostly used for aided guidance and people fear wizards who use them as weapons.

Wands are quite lethal. Dark wizards can utilize wands to cast terrible spells that induce unbearable torment, causing wizards to beg for death. But the key is there are not many ways you can kill a wizard. There is only one spell, and it is illegal.

On the other hand, Lightsabers are not used for any other purpose than just a mere weapon. They appear aesthetic, but apart from illumination, they are used as deadly weapons. You can cut off almost anything with these lightsabers.

Any wound they cause will be cauterized with a simple swipe. Their attacks are quick and devastating, especially when used by professionals. So, do steer clear if you find anyone with a lightsaber in your vicinity.

So, due to the pure advantage of range and how wands do not require the user to get up close to their opponent, a wizard would end up winning in this round.

As we all know, there are limited wands that the wandmakers have designed on special requests. Otherwise, the wands are designed by wandmakers, and it is not an easy thing to do as we have learned in the books.

However, the story of lightsabers is a little bit different. Jedi and Sith can modify, improve, or create new lightsabers at any time in their lives. But the color of the lightsabers cannot be changed without the replacement of the crystal.

What is the final say?

Wands could simply be the most practical option between the battle of lightsaber vs wand. We know it might upset a lot of fans here today. But if we talk terms, then lightsabers have limited uses as compared to the wands.

They can be used for many different purposes, which have made occupations different in the wizarding community. There are healers, Aurors, professors, cooks who all have made use of wands differently.

We cannot say the same about lightsabers. They are not always even used as weapons. Certain people in the Star Wars universe have been trained for combat. They can fight without having to accommodate themselves with lightsabers.

However, the battle between these two deadly weapons is something we would all love to witness. And we cannot be surely content with either choice. Some days, the wands feel like they could take the lead while other days, it is just the day for lightsabers.

Talking about the wands and lightsabers reminds us of the deadliest fictional villains of the world: Voldemort and Darth Vader.

Who would win: Voldemort or Darth Vader?

Voldemort and Darth Vader,  are two major pop culture icons. They were the main villains of Harry Potter and Star Wars, respectively, and are an interesting match-up to think about.

When it comes to ability, strength, and resources, one must be a better fit. What qualities would surpass the other if the two went head-to-head?

Voldemort has the upper hand in many aspects like the natural ability for destruction, followers, long life, and use of weapons. On the other hand, Darth Vader has also got eternal life, lineage, and trained ability.

Vader, in the end, dies of self-sacrifice, otherwise, he couldn’t be killed or destroyed. Vader also had a quality of sidekicks. Viett was the most loyal crony of Vader and had a whole army of his own to support him.

VS | Darth Vader vs Lord Voldemort

Looking at the final results, it appears as Vader has triumphed. Vader has significantly more authority in each of their separate franchises than Voldemort ever had. This, however, would not account for a one-on-one brawl between the two.

If the results are anything to go by, Voldemort may be the victor, since he possesses significantly more strength in his powers than Vader.

Whatever the case may be, it is a close call. Both villains have a great deal of expertise and resources, representing major barriers for their respective heroes.

Who would win in a fight? Anakin Skywalker or Harry Potter?

Every great villain needs a noble adversary. This is the boy who lives for Voldemort. While Voldemort was never able to conquer Harry, Harry was never a fighter.

He devoted everything to save the magical world, but he always preferred peace as an option and was almost always helped by his lot to fight most of the battles. Bravery, loyalty, and sacrifice are his key points but there is little he can do without his wand.

Anakin Skywalker, on the other hand, does not need the lightsaber to battle. He is an experienced Jedi, with a seat on the council (without the rank of Master, obviously). He is trained in combat and is natural with his use of Force.

Anakin was considered to be the most powerful Jedi to ever live, and he was a fighter. With his experience in training Ahsoka and his time as a General in the Clone Wars, Anakin had an extremely heightened sense of combat and how to win battles.

So, we can safely assume that Anakin would win the battle between these two whatever the outcome of lightsaber vs wand.

How Do You Spin A Lightsaber Properly And Safely?

How to Hang a Lightsaber on the Wall?