The scavenger-turned-Jedi Rey Skywalker showed herself to be exceptionally strong with the Force throughout the Sequel Trilogy of the Skywalker Saga.

Even though her parentage was revealed in Episode IX, there are still questions surrounding her origins and relations.

Is it possible that Rey is somehow related to Darth Vader?

There is little to no evidence that Rey is biologically related to Darth Vader.

However, the two powerful Force-sensitives may be connected in ways other than blood, and there are some interesting fan theories to suggest they may be more closely related than it initially appears.

Are Darth Vader and Rey Related?

At the end of Star Wars Episode IX: The Rise of Skywalker, after spending three movies wondering about her family heritage, Rey finally reveals her surname: she introduces herself to a local woman on Tatooine as Rey Skywalker.

This was a baffling revelation, as it had been revealed earlier in the movie that she was the biological granddaughter of Sheev Palpatine, and the daughter of his son–so her name should have been Rey Palpatine.

Did Rey simply reject her family name and adopt another one? Or did she know something that the movie didn’t reveal to fans?

Of course, most Star Wars fans are familiar with the Skywalker name. It was the family name of Darth Vader, whose given name was Anakin Skywalker. It was also the surname of Vader’s son, Luke.

Before The Rise of Skywalker, many fans speculated that Rey could be related to Darth Vader; perhaps she was another daughter, a granddaughter, or even a reincarnation of the iconic Sith Lord.

But the movie seemed to shoot down all of these fan theories. In their place, new ones began to emerge.

One theory suggests that Vader was actually related to Palpatine–that he was his son, conceived through the Force. If this were the case, Vader would be Rey’s uncle.

However, this is only a theory and there is nothing in canon to give it any weight.

The closest in-canon suggestion that Vader and Rey are related is Rey’s Force dyad bond with Vader’s grandson, Ben Solo. Perhaps through the Force, she is not only closely related to Ben but to his family as well.

There is evidence of this in the way Rey appears to view Ben’s parents, Han Solo and Leia Organa, and even his uncle, Luke Skywalker, as the family she never had. This closeness suggests a family relationship, even if it isn’t biological.

Perhaps this is why she chose to take on the Skywalker name. Perhaps she considered herself an adopted member of the Skywalker family.

Again, these are only theories born of an effort to connect the dots and read between the lines. The official story, according to canon, is that Rey is not related to Darth Vader.

As mentioned above, Darth Vader was initially called Anakin Skywalker. He was apparently conceived in the Force and has no known father, according to canon. His mother was Shmi Skywalker.

Anakin became a Jedi; and, though Jedi were forbidden from forming attachments, he secretly married Senator Padme Amidala.

They had two children, Luke and Leia. The twins were born right after Anakin became Darth Vader, and Padme died within moments of giving birth. Luke and Leia were separated and hidden to keep them safe from Vader.

Years later, Vader found out about them. Emperor Palpatine first suggested to Vader that Luke was the son of Anakin Skywalker, and Vader later discovered Luke had a sister as well; though it’s unknown if he knew her identity.

Vader died moments after Luke redeemed him as Anakin Skywalker; he sacrificed himself to save his son from Palpatine.

Luke, now a Jedi, began training a new generation of Jedi. He trained his sister Leia, though she remained a political figure and never completed her training. Her and Han Solo had one child, Ben Solo. 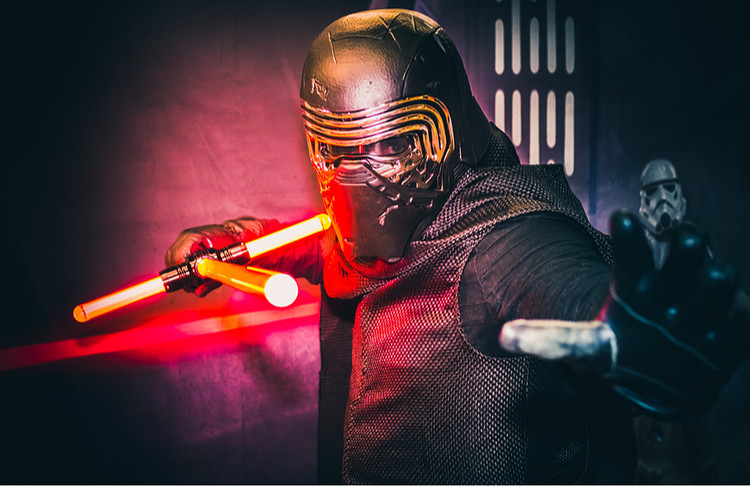 Shortly after his redemption, Ben gave his life to save Rey.

Rey took on the Skywalker name. At this point in canonical history, she had no children, though a popular fan theory exists that Ben impregnated her through the Force in the moments before his death. Again, this is only a theory.

Regardless of the name she adopted, Rey is, biologically, a Palpatine.

The Palpatine family came from Naboo; they were a wealthy, noble, upper class family. Rey’s grandfather was Sheev Palpatine, secretly known as Darth Sidious, who became the Supreme Chancellor of the Republic and, later, the Emperor of the Empire.

During his time as Emperor, he conducted various experiments that merged cloning with dark Force powers. He wanted to become immortal, to transfer his consciousness to a cloned body when his own body died.

There were many experiments, most of which were unsuccessful. He produced only one clone that lived, a non-Force-sensitive “son” that he rejected.

This son in turn rejected Palpatine and the ways of the Sith. He took on the name Dathan.

Since he was not Force sensitive, he was able to avoid any connection with his father and he lived a relatively normal life.

Dathan eventually married a woman named Miramir, and they had Rey. Though neither of her parents were Force users, Rey had Palpatine blood flowing through her veins and inherited her grandfather’s strong Force-sensitivity.

Her parents struggled to keep her hidden from Palpatine, whose consciousness lived on in weak, cloned host bodies of himself after he was supposedly killed by a redeemed Anakin Skywalker.

Palpatine finally found Rey’s parents and killed them, but not before they hid Rey. He kept an eye on her through the Force but couldn’t do much to get at her in his weakened state.

He planned to one day convert her to the dark side, then use her body as a strong, healthy host of his consciousness, which would have greatly increased his power and control over the galaxy.

Eventually, though, Rey and Ben Solo confronted him, and he discovered their dyad bond, which he used to heal himself.

They were nearly killed as he extracted and absorbed their life forces, but Rey was able to call on the strength of all past Jedi to destroy him.

Perhaps this is another reason she rejected the Palpatine name; she wanted to destroy the name along with the man who had terrorized the galaxy for so long. And she wanted no connection to him.

Rey Vs Palpatine but better

Rey may have taken on the surname of Skywalker, but there is currently no evidence to suggest that she is biologically related to Darth Vader or any other member of the Skywalker family.

Her closest relation is her dyad bond with Vader’s grandson, Ben Solo