Darth Vader may have been the most feared Sith in all the galaxy, with the exception of Emperor Palpatine, but beneath all the armor and mechanical limbs there was a man who used to be a Jedi.

In the end, Darth Vader showed that he was still Anakin Skywalker on the inside and brought balance to the Force.

Without a doubt, the first six Star Wars films are a long tale of the downfall and redemption of Anakin Skywalker, but it’s also a tale of love. After all, love is part of the reason Anakin turned to the dark side of the Force.

To give a quick answer, yes. Darth Vader loves his children, at least he does at the end of his life. Though the dark side of the Force had a strong grip on Vader, he never lost his true self.

Still want to learn more? Keep reading to get all the details.

Who Does Darth Vader Love?

Darth Vader was once a promising young Jedi named Anakin Skywalker who loved a woman named Padme Amidala. Almost from the first moment he laid eyes on her, Anakin loved her.

Anakin Skywalker - Are You An Angel?

Love, specifically marriage, was off limits for the Jedi, so Anakin kept his feelings secret for many years. However, Anakin and Padme eventually give into their feelings and end up marrying in secret.

Star Wars: Attack Of The Clones | The Wedding Of Anakin & Padme 4K

All this goes to show that Anakin was not a Jedi devoid of love. In fact, it was quite the opposite. Love drove Anakin to make almost every decision he made.

In many ways, Anakin was an overly emotional person. His love for Padme drove him to act intensely and irrationally.

At the heart of Anakin’s love was also fear, and as we all know, fear is the path to the dark side of the Force. Part of the reason Anakin was filled with fear was that he left his mother at a young age and was afraid of anything bad happening to her.

Fear is the path to the Dark Side

In addition to Padme, Anakin also loved his mother dearly. Unfortunately, Anakin’s fears about her became true when his mother died in his arms.

After the death of his mother, Anakin was filled with even more fear about those he loved. He wanted to be all-powerful so he could stop anything bad from happening to them.

When Anakin started having visions of Padme dying, he naturally felt very afraid. He didn’t want Padme to be taken away from him just like his mother was.

In his desire to save Padme’s life, Anakin was deceived by the dark side of the Force. Palpatine fed into Anakin’s fears by telling him the tale of Darth Plagueis the wise.

In doing so, Palpatine lured Anakin by saying he’ll be able to stop death if he learns the ways of the dark side of the Force. As Anakin would later learn, this was one of Palpatine’s many lies.

Driven by his love for Padme, Anakin ends up destroying the Jedi Order, killing his friends, and losing the woman he loved. In his pursuit of love, Anakin left a wave of destruction.

After Padme died and Anakin was fully immersed in the dark side of the Force, his love was gone. Only fear, hate, and suffering remained. 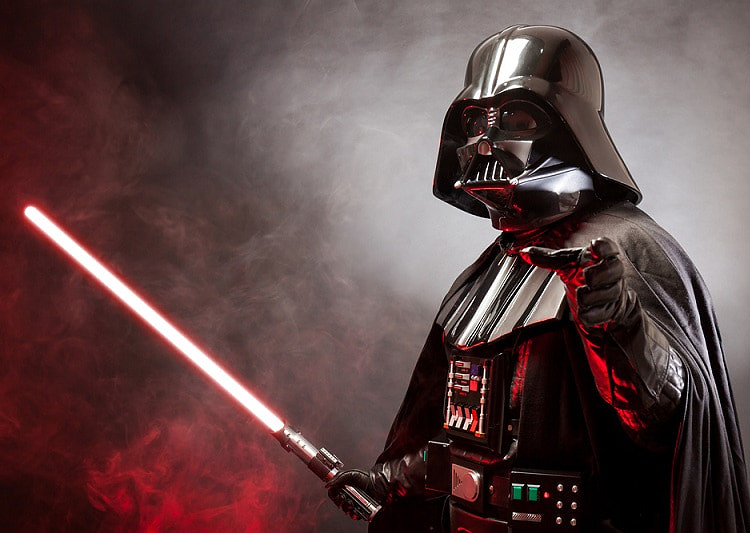 Despite all Vader’s cruelty toward the galaxy and his own children, his deathbed redemption proves that there was good in Anakin all along. Luke knew it, and he brought out the good in his father.

When Luke is fighting Emperor Palpatine, Vader is conflicted about his feelings. He loves Luke, but is sworn to serve the Emperor.

When Palpatine almost kills Luke with his Force lightning, something changes in Vader. His love for his son takes over, and he rushes in to save him by killing the Emperor.

In doing so, he brings balance to the Force and redeems the good in himself. It’s also a tangible act of love, sacrificing himself to save his son.

Vader is left with mortal injuries after Palpatine uses Force lightning on him, but in his final moments, Luke gets to see his real face. In the following scene between the two, Anakin is fully redeemed. The father and son are finally filled with love for each other.

Even though Anakin only found out that Luke had a twin sister a few moments before, it’s easy to see the joy in Anakin’s eyes when he looks at his son.

Darth Vader lived most of his life fueled by fear, anger, hatred, and suffering. However, in his last moments, his children are what finally brought him back to love.

Even though Vader had met Leia in person before, he didn’t know that he had a daughter until moments before his death. Vader never shows any signs of recognizing Leia as his daughter or sensing any kind of Force presence within her.

Obi Wan had sent both Luke and Leia into hiding to keep them from Vader. It’s fair to say that Obi Wan’s plan worked, at least for the most part.

If Vader had recognized Leia as his daughter, he would have probably tried to turn her to the dark side or had her killed when he had her in captivity. Even so, at the end, Anakin Skywalker opened his heart up to his children and redeemed himself.

In his final moments, Anakin says to Luke, “You were right. You were right about me. Tell your sister you were right.” He doesn’t even know her name, yet he knows that he still loves her.

The saga of Anakin Skywalker is tragic and emotional, but it has a heart-warming ending. No matter how much trauma and pain someone has endured, there is always the potential for light to shine through.

In this case, Anakin rejected the dark side of the Force and embraced the light side. Even though the rest of the universe thought he was too far gone, Luke never gave up on him.

In the end, Anakin saved the galaxy, saved his children, and brought balance to the Force as was prophesied.