In Star Wars Episode IV: A New Hope, Han Solo assures his skeptical new friends, Obi-Wan Kenobi and Luke Skywalker, that the Millenium Falcon is the fastest ship in the galaxy.

At the end of Episode V: The Empire Strikes Back, the Millenium Falcon blasts into hyperspace to escape from Darth Vader. Han may be right about the Falcon being the fastest ship in Star Wars, or is he?

The 3 fastest ships do include the Millenium Falcon, but Han’s ship is not the fastest.

How to Rank Ship Speeds?

A hyperdrive, or warp drive, is an engine system that allows ships to travel faster than the speed of light. Hyperdrives come in different classes, the lower the ranking of the hyperdrive, the faster it can travel across the galaxy.

During the end of the Republic era, military starships usually had slower hyperdrives. By the time of the Imperial age, starfighters became faster with Class 1 or 2 hyperdrives.

The Millenium Falcon, in contrast, had a Class 0.5 hyperdrive, which made it much faster than most ships. Han Solo had made some modifications to the engine to achieve this speed. 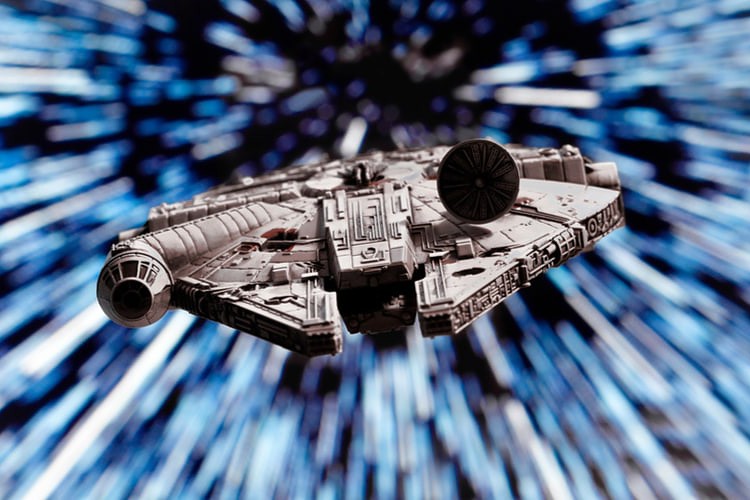 Han made a mistake when he used the term parsec to describe the speed of the Falcon, but we can still draw on science to find out how fast the Falcon is.

A parsec is a measure of distance in space that is equivalent to 3.26 light-years or about 19 trillion miles. It is not a measure of speed, but it can still reflect how quickly the Falcon covered a large amount of space.

The Millenium Falcon can travel through space very quickly but, as we also know from the Falcon, hyperdrives can malfunction.

Accordingly, we will consider a second important aspect of a ship’s speed–sublight speed capability.

With sublight speed, we can refer to the sublight engines, or sublight drives, which allow ships to fly within planetary atmospheres.

The ion engine is the most common sublight drive. Starfighters had small, powerful drives that allowed them to accelerate quickly and fly fast within a planet’s atmosphere.

With sublight engines, we can also measure a ship’s speed in kilometers per hour when that ship is flying within a planet’s atmosphere. This is a helpful metric to narrow down the fastest ships in the Star Wars galaxy.

The Horrifying Truth Behind Why Sublight Space travel Was So Dangerous

Based on hyperdrive and sublight speed, the RZ-2 A-Wing Interceptor is our third fastest ship.

Also known as the Resistance A-wing, the RZ-2 was an upgrade to the previous Republic-era RZ-1 A-Wing. The RZ-2 built upon the field modifications that had been applied to the RZ-1 during the Galactic Civil War.

The RZ-2 was manufactured by Kuat Systems Engineering, which was part of Kuat Shipyards–the primary producer of ships in the Star Wars galaxy.

Kuat Systems equipped the RZ-2 with two upright stabilizers that improved atmospheric flights. These stabilizers were built from a carbo-plas material to make them strong but still lightweight.

The RZ-2 A-wing also came equipped with a hyperdrive. The drive was a class 1 ranking that helped make the RZ-2 both faster and more effective than the RZ-1 model.

The RZ-2 became a powerful starfighter in the war with the First Order, and it takes number 3 on our list.

(Star Wars Ships) Is the RZ-2 A-Wing a PERFECT Interceptor?

If we ask Han Solo, he would tell us that the Millenium Falcon is the fastest ship in the Star Wars galaxy, but the Falcon only earns the second spot here.

The Millenium Falcon ranks second on this list because of the Falcon’s hyperdrive capability. Even though Han mistakenly refers to parsecs to indicate his ship’s speed, he is still on track.

In Episode IV: A New Hope, Han states that the Millenium Falcon “made the Kessel Run in less than twelve parsecs.” Yet, a parsec is a measure of spatial distance, not time or speed.

So, Han comes off as not completely knowing what he is talking about. But he is actually on to something when he brags about the speed of the Falcon.

The Kessel Run is a 20-parsec pathway in space that smugglers used to transport their goods. Han took a shortcut through the Akkadese Maelstrom, a dangerous move that probably brought him close to black holes.

If Han did fly by black holes, he demonstrated the speed of the Falcon and its hyperdrive–the ship needed to be fast enough to escape a black hole’s gravitational pull.

The Falcon does have a Class 0.5 hyperdrive, known to be the fastest hyperdrive in Canon. Lando Calrissian also added to this accomplishment when he said the Falcon was “the fastest hunk of junk in the galaxy!”

The Falcon also secured the second ranking because of its impressive sublight speed. It has a maximum atmospheric speed of 1,200 kph. Lando was the one who proved this top speed.

Later, the Falcon did slow down some, but still registered at 1,050 kph. The Falcon was still able to fly faster than and evade most ships.

For example, in The Force Awakens, Rey outflies and outmaneuvers the TIE fighters pursuing her while piloting the Falcon.

As we saw in Episode IV: Return of the Jedi, the Falcon destroyed the main reactor of the second Death Star. With help from Wedge Antilles and his X-Wing, they both managed to blow up this second threat to the galaxy.

Going by our metrics of hyperdrive and sublight speed, the TIE Vendetta is the fastest ship in Star Wars.

The TIE Vendetta Space Superiority Fighter was the original name of Kylo Ren’s ship. Nicknamed the TIE Silencer and later called the TIE/vn fighter, this ship is impressive because of its speed.

This ship is an upgrade to the TIE fighter series that first appeared in the original Star Wars films. The TIE line is known for its twin ion engines that make that fearsome sound as they fly by. TIE’s also have distinguishing solar collector panels.

The TIE Vendetta is also an upgrade of the First Order’s starfighters. The Vendetta was engineered for both handling ability and speed.

It has a 1,850 kph top sublight speed, making it the fastest starfighter. This impressive speed adds to Kylo Ren’s fear factor.

Kylo was known for being able to outmaneuver attacks with ease. He likewise single-handedly inflicted damage to the Resistance fleet, this is partly due to the TIE/vn’s speed.

In Episode VIII: The Last Jedi, Ren easily attacks and destroys Resistance ships. His ace pilot abilities explain part of this destruction, but the maneuverability and speed of this ship greatly contribute to his success as well.

The TIE Vendetta is also equipped with a hyperdrive that allows it to make the jump beyond lightspeed. Previous TIE fighters of the Galactic Empire did not have this capability.

The TIE/vn fighter has a Class 1 hyperdrive, which makes it one of the faster engines. The First Order technicians who worked with the manufacturer Sienar-Jaemus Fleet Systems, produced a more capable, higher-powered starfighter.

What Is the Slowest Ship in Star Wars?

Using the same guidelines, the slowest ship in Star Wars is probably the Executor-Class Dreadnought. This may be like comparing apples to oranges since the Executor is a Super Star Destroyer. Either way, this ship really stands out for being slow.

On one occasion, a Rebel RZ-1 A-wing starfighter crashed into its bridge, causing the Executor to lose power and sink into the Death Star 2.

However, it did have a Class 1 hyperdrive engine, which makes it compatible with the rankings here. It was fast in hyperspeed but very slow in sublight speed.

Kylo Ren’s TIE/vn fighter comes in as the fastest Star Wars ship, followed by the Millenium Falcon, and third being the RZ-2 A-Wing Interceptor.

All three ships are fast in terms of atmospheric and hyperdrive speed. Yet, the TIE Vendetta’s sublight speed combined with its hyperdrive capabilities rank it above the Millenium Falcon.

Han Solo’s ship was fast, but not the fastest ship in the galaxy.