Obi-Wan Kenobi has had a long history throughout the Star Wars franchise. Appearing both in physical and spiritual form in the Original Trilogy, he was also a protagonist of the Star Wars Prequels.

Obi-Wan was also a major player in the animated series The Clone Wars and, later, had a minor role in Star Wars Rebels. He became so popular, in fact, that in 2022, he got his own miniseries on Disney Plus.

His appearances in Star Wars span a significant period of time, from his days as a young padawan to living in exile as an old man. With so many years covered, you may be wondering if he had the same lightsaber during all that time.

The answer is no.

Obi-Wan Kenobi had three lightsabers during the course of his life as a Jedi. Keep reading to learn more about each of these lightsabers, as well as the history and symbolism behind them.

Obi-Wan’s first lightsaber was the one he built as a padawan while training under Jedi Master Qui-Gon Jinn.

The minimalist hilt was a simple black and gray design with a red actuator button to ignite the blade. In design, this lightsaber was nearly identical to Qui-Gon’s.

Unlike his master’s green-bladed lightsaber, however, Obi-Wan’s lightsaber blade was blue in color. This signified his place as a Jedi Guardian, whose focus on combat bespoke a desire to protect the innocent and fight for good. 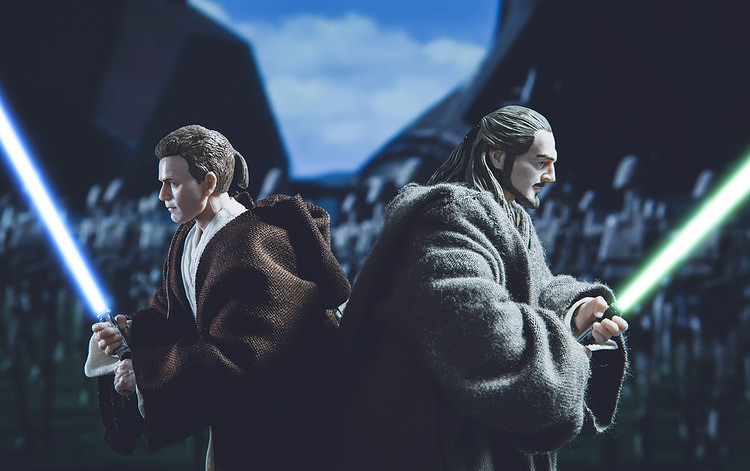 The similarity of design to Qui-Gon’s lightsaber showed Obi-Wan’s respect for his master and his by-the-books approach to being a Jedi.

The simplicity of the saber and its blue color further showed that in many ways, Obi-Wan was a classic Jedi–in control of his emotions and willing to respect authority and the Jedi code.

Obi-Wan used this lightsaber on-screen in Star Wars Episode I: The Phantom Menace. In the film’s climactic battle, Darth Maul strikes Qui-Gon down, then disarms Obi-Wan, knocking him and his lightsaber down a reactor.

While Obi-Wan clings to the edge, his lightsaber falls down through the chamber and is lost. Obi-Wan then catapults himself out of the chamber, takes up his fallen master’s lightsaber, and defeats Maul.

Though he lost both his master and his lightsaber in this duel, Obi-Wan was promoted to Jedi Knight and, following the events of the film, set about constructing a new lightsaber. 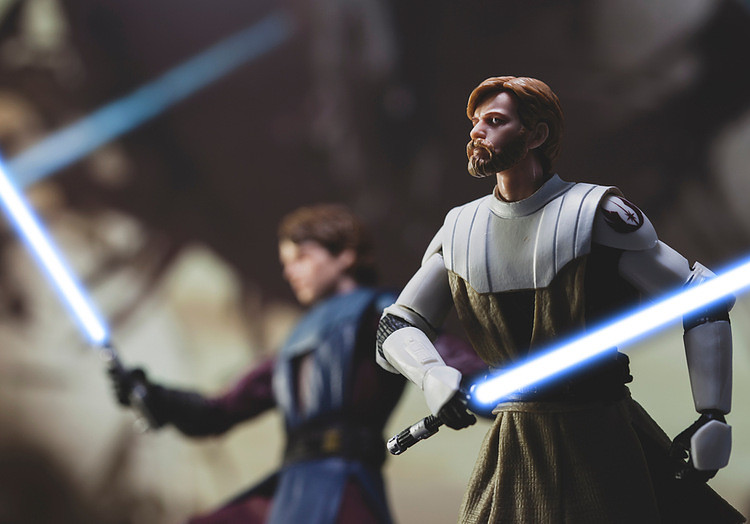 Obi-Wan’s second lightsaber was built following his promotion to Jedi Knight and was nearly identical to the one he had made as a padawan–so much so, that fans originally thought it was the same weapon.

The simple black and gray hilt had a slightly wider opening than his original lightsaber. Aside from this, the hilt design remained unchanged and the blade color was still blue.

As the design was nearly identical to Qui-Gon’s, it is thought that Obi-Wan built his new lightsaber this way to honor his fallen master.

This further established Obi-Wan’s character as a straight-laced Jedi who had a lot of respect for those in his Order, and for his old master in particular.

Obi-Wan used this blade throughout his time training Anakin Skywalker, and it is seen on-screen in Star Wars Episode II: Attack of the Clones.

In this film, he uses the lightsaber to chop off Zam Wesell’s hand before she can assassinate Padme Amidala. Later, the blade is his trusty companion in his fight with Jango Fett in a driving rainstorm on Kamino.

Unlike his padawan lightsaber, Obi-Wan’s second blade is not lost in a climactic battle. It is taken from him by Count Dooku when Dooku captures him on Geonosis.

Later, during the First Battle of Geonosis, Obi-Wan fights in the battle using a borrowed lightsaber, as he was unable to recover his own.

It’s unknown what happened to Obi-Wan’s lightsaber after Count Dooku took it. Perhaps the Count corrupted it, turning it into a red-bladed lightsaber to give to a future Sith Lord.

Whatever happened to it, Obi-Wan found himself once again in need of a new lightsaber. 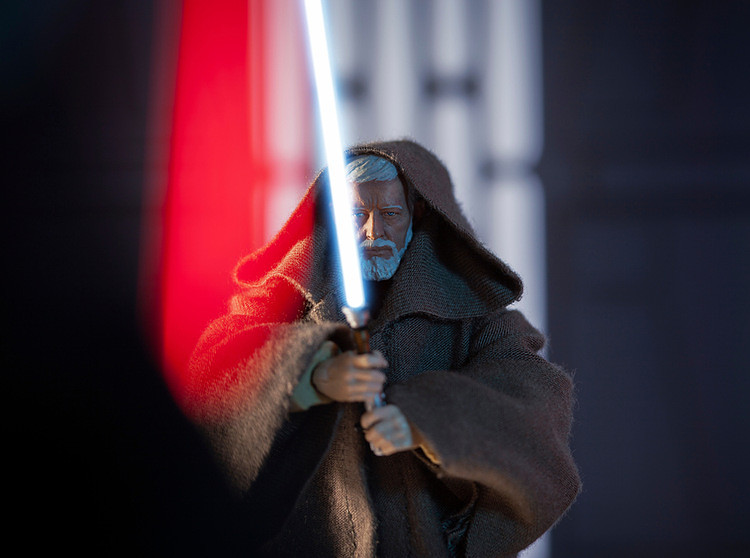 The third and final lightsaber Obi-Wan made was his most iconic and well-known. This is partly because it has received more screen time than either of his previous lightsabers; but also because the design was much different.

Obi-Wan built this lightsaber following the First Battle of Geonosis and his promotion to Jedi Master. Though the blade color remained blue, the hilt received some major upgrades that seemed to suggest Obi-Wan was finally expressing his individuality.

The hilt of this saber was all black but had a silver pommel and hand guard. The main part of this hilt tapered to a narrow gold neck before widening into the silver hand guard.

What’s more, instead of a plain red actuator button, this saber contained an oblong gold switch.

The elegant design was a notable departure from his previous lightsabers. It signified that Obi-Wan had let go of his old master and was embracing his own identity.

At the same time, the hilt retained a classic, traditional appearance that aligned well with Obi-Wan’s level headed approach and core values.

He fought some of his most iconic battles with this lightsaber–battles such as his defeat of General Grievous and his three duels with Anakin Skywalker/Darth Vader.

In his final meeting with his former padawan, Obi-Wan sacrifices himself to save Luke Skywalker. Following this fateful duel, Darth Vader presumably takes Obi-Wan’s lightsaber, and it is thought to have been destroyed along with the rest of the Death Star in the Battle of Yavin.

As mentioned, this was Obi-Wan’s most iconic lightsaber and undoubtedly the one that saw the most combat.