Leia Skywalker Organa Solo is one of the most well-known characters in Star Wars. Appearing as a protagonist in the original trilogy, she makes a variety of other appearances in other movies and shows that span the course of her life.

With that in mind, you may be wondering: How old is Leia in each of these shows and movies?

In Star Wars Episode III: Revenge of the Sith, Leia is separated at birth from her twin brother, Luke. Raised as a princess on Alderaan, her various on-screen appearances take place when she is a newborn, age 10, age 15, ages 19 to 23, and ages 53 to 54.

How Old is Leia in Kenobi?

Leia’s most recent appearance on-screen was in the Disney Plus miniseries Kenobi. The miniseries provides a look into the life of Obi-Wan Kenobi while he lived in hiding on Tatooine in the years following the rise of the Galactic Empire.

In an effort to draw Obi-Wan out into the open, the Empire’s Inquisitors kidnap a young Princess Leia from her adopted homeworld of Alderaan.

The ploy works, as Obi-Wan responds to the call to rescue her. He is ultimately successful, but not before learning his former apprentice and Leia’s birth father, Anakin Skywalker, is alive and well as Darth Vader.

In this miniseries, Leia is portrayed as a stubborn, intelligent, and outspoken little girl. The miniseries is set in 9 BBY, about 10 years after the events of Star Wars Episode III: Revenge of the Sith. As such, Leia is 10 years old in Kenobi.

In the season 2, episode “A Princess on Lothal”, she plays the part of a member of the Imperial Senate delivering supplies to the people of a war-torn world; in reality, she is a rebel sympathizer on a secret mission to deliver much-needed ships to the freedom fighters.

Though she is still quite young at this time, she is highly competent at playing both sides–she helps the rebels successfully “steal” the ships while maintaining the appearance of a harmless diplomat who got caught in the middle of a fight.

Because this episode occurs in the second season of Rebels, it is about four years before the events of the original Star Wars movie, A New Hope. Thus it is set in the year 4 BBY, when Leia was about 15 years old.

Leia in the Original Trilogy

Leia’s most notable appearances come in the original Star Wars trilogy, as she was one of the main protagonists of the movies.

These three movies took place over a span of four years. Let’s take a closer look at Leia’s age in each film.

At the beginning of Star Wars Episode IV: A New Hope, Leia is captured by Darth Vader and taken to the Death Star, where she repeatedly resists his efforts to torture information from her.

A final effort to get her to talk ends in Grand Moff Tarkin ordering the destruction of Alderaan, which a horrified Leia is forced to witness. 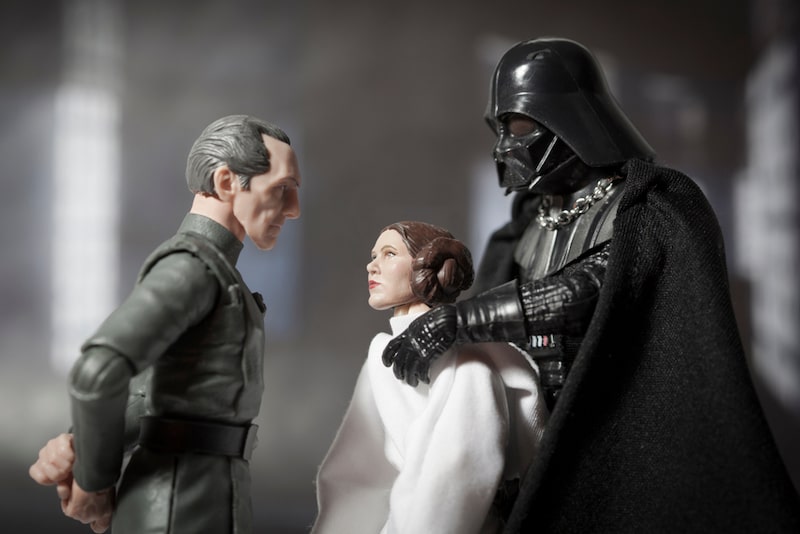 Han, Luke, Obi-Wan, Chewbacca, R2-D2, and C-3PO arrive on the Death Star and attempt to rescue Leia when they find out she has been slated for execution. Though the rescue attempt is anything but smooth, Obi-Wan sacrifices himself to allow the others to escape.

They head to the secret rebel base on Yavin 4, where Leia delivers the stolen Death Star plans. She watches as Luke, Han, and others fight the Empire in the Battle of Yavin, which results in Luke destroying the Death Star.

Later, Leia presents medals to Han and Luke for their heroics in the battle.

All of these events take place over the course of a few days in the year 0 BBY, when Leia was 19 years old.

The Empire Strikes Back

Star Wars Episode V: The Empire Strikes Back, picks up three years later. The Empire discovers and defeats the rebel base on Hoth, forcing Leia to evacuate with Han in the Millennium Falcon.

They spend the majority of the movie running from the Empire and attempting to repair the hyperdrive on the ship. This leads them to Cloud City over the planet Bespin, where Han asks his old rival Lando Calrissian for help in repairing the Falcon.

Unfortunately, the Empire arrived on Cloud City first, and Lando was forced to turn Han and Leia over to Darth Vader. Han is frozen in carbonite and turned over to Boba Fett, while Leia and Chewbacca are sent to Vader’s ship. 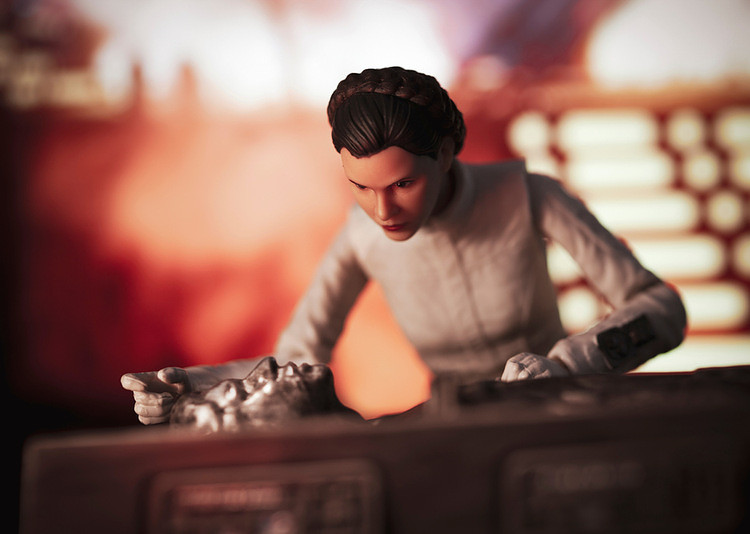 On the way, Lando rescues them, convinces him they may still be able to save Han, and leads them back to the Falcon. As they are escaping, Leia senses through the Force that Luke is nearby and in trouble, and they rescue him following his doomed fight with Vader.

All of these events take place over a short period of time in the year 3 ABY, when Leia was about 22 years old.

A year later, all efforts to rescue Han, who was delivered to Jabba the Hutt, have so far failed. Luke comes up with a new plan, and as part of the plan, Leia gets inside Jabba’s palace disguised as a bounty hunter.

She manages to free Han from the carbonite, but they are discovered and imprisoned. Jabba forces Leia to be his slave, dressing her in a metal bikini and chaining her to himself.

Luke arrives and manages to save both of his friends. They rendezvous with the Rebel Alliance, who is planning a massive assault on the Empire’s incomplete Second Death Star.

Luke finds out that Leia is his sister, and he shares this information with her–along with the information that Darth Vader is their father. Luke leaves to face Vader as a Jedi, while Leia remains on Endor to take part in the coming battle.

Han and Leia lead a strike team to disable the energy shield protecting the Death Star. Once the shield generator is destroyed, a team of starfighters is sent to destroy the Death Star, which they do moments after Luke escapes with the body of his redeemed father, Anakin Skywalker.

The rebels celebrate their victory over the Empire, and Luke, Leia, and Han reunite on Endor.

All of these events took place in 4 ABY, when Leia was about 23 years old.

Leia in the Sequel Trilogy

Leia doesn’t get another on-screen appearance until the sequel trilogy, which is set a few decades after the original trilogy. Let’s take a closer look at Leia’s age in each of these movies.

In Star Wars Episode VII: The Force Awakens, Leia is revealed as a general leading the Resistance against the dictatorial First Order.

Though her political career had been destroyed several years earlier when it was revealed she was the daughter of Darth Vader, she was unable to stay out of the fight–hence her taking on a more militant role than she had in the past.

Leia’s part in this movie is relatively small, but it is clear that she is still a respected and capable leader in the ongoing fight for freedom.

The Force Awakens is set in the year 34 ABY, so Leia is about 53 years old during the events of the film.

Leia continues to lead the Resistance in the wake of the New Republic’s destruction, but they are facing steep odds as the First Order grows stronger and the Resistance grows weaker.

Luke reveals to Rey his attempts to train Leia as a Jedi and his failure to keep her son, Ben, from falling to the dark side.

The Resistance is nearly destroyed, and all that is left gather on the planet Crait, where a self-exiled Luke astral projects in a duel with Ben, who has assumed the name Kylo Ren. Before their duel, Luke reunites briefly with Leia.

While Luke distracts Ren, Rey rescues the trapped Resistance, enabling them to escape and to fight another day.

All of these events take place in 34 ABY, so Leia is still about 53 years old.

The Rise of Skywalker

Leia attempts to continue training Rey in the ways of the Jedi after Luke’s death, while also continuing to lead the Resistance.

Meanwhile, her health declines rapidly, and she uses the last of her strength to call out to her son through the Force. Though this action costs her life, it is instrumental in prompting Ben’s ultimate return to the light side.

The events of this film take place in the year 35 ABY, meaning that Leia dies at the age of 54.

How Old is Leia Compared to Han Solo? 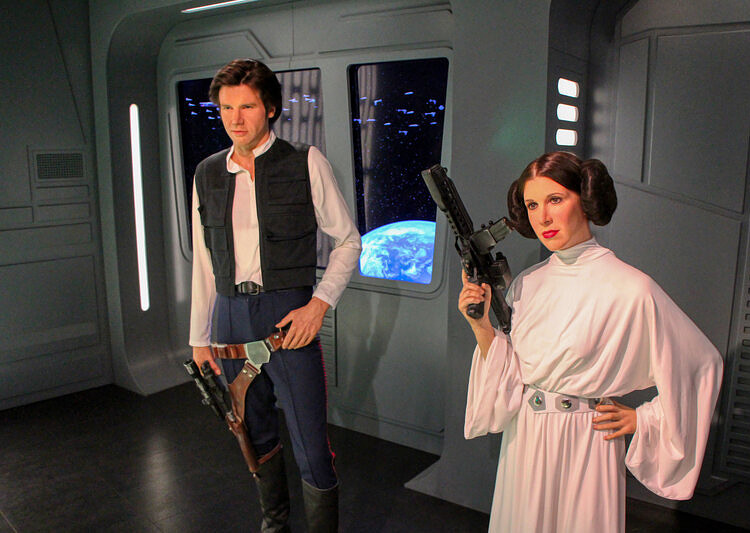 The original trilogy shows the relationship that develops between Leia and Han. This leads to their marriage and the birth of their son, Ben, within a year or so following the Battle of Endor.

With this in mind, Leia was about 12 to 13 years younger than Han.