Order 66 was one of the most devastating events to take place in the Star Wars universe. A single command from Darth Sidious –“Execute Order 66”– turned an entire army of cloned soldiers against their Jedi generals and led to the near-complete destruction of the Jedi.

But not all of the Clones carried out Order 66. Some of them consciously resisted the Order, while others were simply unaffected by it.

In this article, we’ll discuss all of the clones that disobeyed Order 66, both in Star Wars Canon and Legends.

In Star Wars Canon, the Clone soldiers of the Grand Army of the Republic were controlled by inhibitor chips implanted in their brains.

When Order 66 was issued, these inhibitor chips stole their autonomy and made it nearly impossible for them to disobey.

And yet, not every Clone went through with the Order. Let’s take a closer look at their stories.

Clone Force 99, also known as “The Bad Batch”, was a group of experimental Clones named Hunter, Crosshair, Wrecker, and Tech. A fifth member, Echo, joined the group after nearly being killed in the line of duty and being “rebuilt” as a cyborg.

When Order 66 was issued, the members of Clone Force 99 seemed unaffected; either their inhibitor chips malfunctioned or their mutations offered them some sort of immunity against the chips.

One of these Clones, Crosshair, was influenced by the chip and attempted to carry out the Order, which led to him leaving the group.

Wrecker’s own inhibitor chip began affecting him and nearly took over his mind before the chip was removed. The other members of the Bad Batch also had their chips removed in order to prevent any similar situations in the future.

During the Clone Wars, Cut Lawquane was a Clone soldier who defected from the Grand Army of the Republic. He began living a simple civilian life out of sight of the Republic, got married, and raised a family.

By the time Order 66 was issued, he was so far removed from his past life as a soldier that the inhibitor chip had no effect on him; he was not compelled to carry out the Order, nor did he do so of his own free will.

Though Fives was dead by the time Order 66 was issued, he is worth mentioning in this article because he was the first Clone to find out about the inhibitor chip.

After witnessing a fellow Clone kill a Jedi after his chip malfunctioned, Fives set out to discover what had happened. In the process, Palpatine revealed himself as Darth Sidious and his plans involving the inhibitor chip, then framed Fives as being unstable.

Fives removed his own inhibitor chip, then attempted to reveal the plot to Rex and Anakin Skywalker, but was killed by friendly fire before he was able to share everything he had learned.

It is unknown how Gregor escaped the controlling effects of his inhibitor chip; however, it is known that he had suffered brain trauma that led to temporary amnesia at one point during the Clone Wars.

It is possible this same trauma resulted in damage to his inhibitor chip.

Whatever the reason, Gregor did not take part in Order 66 and spent the rest of his life fighting against the Empire. He ultimately died as a free soldier in the Battle of Lothal.

Grey initially followed Order 66 and aided in killing his Jedi General, Depa Billaba. However, over a period of several days, he began to realize what he was doing was wrong.

As he and his men tracked down Billaba’s padawan, Caleb Dume, Grey fought against the effects of the inhibitor chip. Ultimately, he sabotaged his own squad and sacrificed his life to save Caleb.

This action made him one of the few Clones to overcome the effects of the chip by the force of his own willpower.

Kix was a medic serving under Captain Rex when Fives made his discovery about the inhibitor chips. After Fives died, Kix attempted to pick up where he left off, as he set out to discover how the chips worked.

He was successful, but his efforts were discovered and he was kidnapped by Count Dooku before he could share the truth with anyone.

He was held captive in suspended animation for decades, essentially forgotten until the ship he was on crash-landed during the Resistance/First Order era. He was revived by a pirate named Sidon Ithano and presumably fought alongside Ithano during the Battle of Exegol. 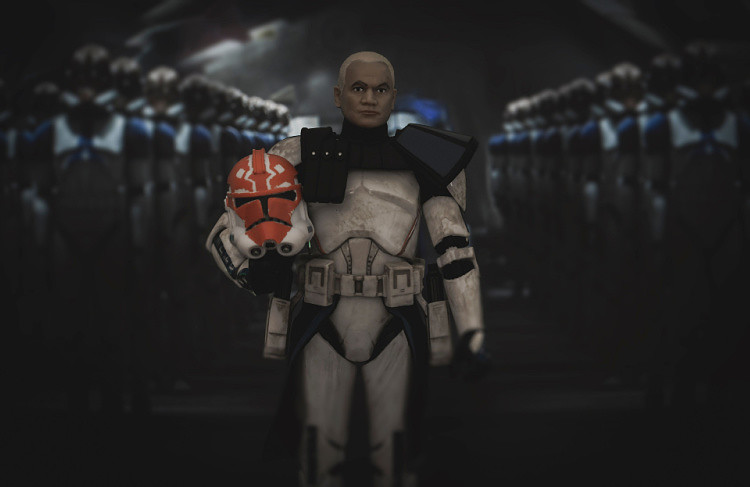 Captain Rex, who served under Anakin Skywalker and Ahsoka Tano, was one of the last to speak with Fives before his death. Though he didn’t have all the details, he made an official report on the inhibitor chips–a report that later saved his life.

When Order 66 was issued, Rex was given specific orders to kill Ahsoka even though she was no longer a Jedi.

Though he attempted to carry out this order while under the influence of the chip, Ahsoka had learned of his report. She was able to stun him, locate his inhibitor chip through the Force, and have it removed.

With the chip gone, he was able to think freely again. He spent years leading his own resistance efforts against the Empire, eventually joining the Alliance to Restore the Republic and fighting in the Battle of Endor.

We don’t know how Wolffe’s inhibitor chip was removed, but we do know that he joined the efforts of rebellion against the Empire alongside Gregor and Rex.

He was highly protective of his fellow Clones and was rather paranoid after having the chip removed.

The Clones of the Star Wars Expanded Universe (now known as Legends) are often portrayed as more nuanced, complex characters than the ones in Canon; specifically, they are not always portrayed as being under complete control of their inhibitor chips.

Appearing in the Rebellion and Empire comics, Able was the lone survivor of a crash on the uninhabited planet of Lubang Minor during the Clone Wars. He spent the next 21 years of his life surviving alone and, as a result, missed Order 66.

Later, Luke Skywalker and other Rebel forces discovered Able, who joined up with them after Luke explained the events of the past couple of decades.

Hob-147 made his appearance in the Star Wars: Clone Wars Adventures comics. He was badly injured in a space battle but rescued and taken aboard a scavenger’s ship.

He was unable to carry out Order 66 because it happened while he was recovering under the care of the scavenger. He later learned that the scavenger was harboring escaped Jedi younglings.

At this point, he made the conscious decision not to carry out the Order, and he even helped protect the younglings from being discovered by the Empire.

Omega Squad was featured throughout the Republic Commandos novels. The squad refused to execute Order 66 largely because one of their members, Darman, who was romantically involved with their Jedi general, Etain Tur-Mukan.

Maze was an Alpha-Class ARC trooper who appears in the Republic Commandos novels; he and his comrades were created without a number of mental modifications that other standard clones received.

Because they lacked these modifications, these ARC troopers were able to think freely without being controlled by anyone else. Maze, in particular, loved to read and had a particular affinity for the Jedi.

When Order 66 was issued, he refused to carry it out. He was just one of many ARC troopers who disobeyed the Order to destroy the Jedi.

Null-Class ARC troopers were also featured in Republic Commandos. This was a group of “imperfect” clones adopted and trained by the Mandalorian Kal Skirata after he learned of the Kaminoans’ plan to kill them.

They were considered outsiders in the Clone Army, so they unsurprisingly refused to carry out Order 66 when it was issued.

Yayax Squad was another group of Clone troopers from the Republic Commandos novel series.

When Order 66 was issued, they deserted the Republic Army and went to join their trainer, Kal Skirata, on Mandalore.