Baby Yoda, or Grogu, is a Force-sensitive child who originally went with Luke Skywalker for Jedi training. However, in The Book of Boba Fett, he chose to return to Din Djarin.

Grogu still could have returned to the Jedi Temple sometime between 9 ABY and 28 ABY to resume his Jedi training. If so, Kylo Ren may have killed him during the destruction of the Jedi Temple.

It is unclear whether Kylo Ren killed Grogu in 28 ABY or even after, when he hunted Jedi. Kylo Ren would have at least hunted Grogu because of the latter’s Force-sensitivity, but it’s also possible Grogu escaped Kylo’s wrath.

Kylo Ren destroyed Luke Skywalker’s new Jedi Temple in 28 ABY after discovering his uncle contemplated killing him given Kylo’s pull to the dark side.

Kylo, still known as Ben Solo, snapped, destroying Luke’s temple with a lightning storm. The act, reminiscent of his grandfather Anakin Skywalker’s siege of the Jedi Temple on Coruscant, slaughtered Padawans in the new generation of Jedi.

The act caused Luke to go into self-imposed exile on Ach-To and it set the stage for The Force Awakens which took place in 34 ABY.

Since The Mandalorian takes place in 9 ABY and the destruction of the New Jedi Temple occurs 19 years later, some fans believe Kylo Ren killed Grogu in the event. While it’s likely Kylo Ren killed Grogu, it’s also likely Grogu either was not present or he escaped Ren’s wrath.

The Book of Boba Fett, which takes place around the same time as The Mandalorian, shows that Grogu was not serious enough to complete his Jedi training with Luke Skywalker.

Instead, he chose the chain mail Din Djarin gifted him over Yoda’s old lightsaber, and he returned to the man he saw as a father figure.

While this doesn’t guarantee Kylo Ren did not kill Grogu, it’s also not a given that Grogu was present at the Jedi Temple when Kylo Ren destroyed it. 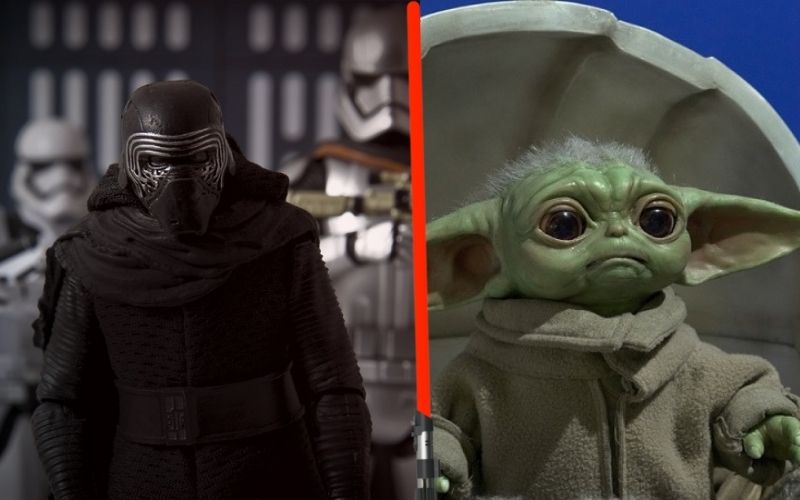 While we don’t know whether Kylo Ren killed Grogu for sure, let’s assume that he did.

Kylo Ren pulled a Darth Vader when he destroyed Luke’s Jedi Temple. Like Vader, fear motivated Ren to slaughter most of the new Jedi Order, but few escaped, as the comic The Rise of Kylo Ren indicated.

If Grogu were present at Luke’s Jedi Temple during the time, Kylo Ren would have gone after the being because of his Jedi powers. And if that’s the case, Kylo Ren could have killed Grogu with the other Padawans.

Had Grogu either survived the destruction of the Jedi Temple or was not present for it, it wouldn’t make him exempt from Kylo’s Wrath.

This would have motivated Kylo Ren to kill Grogu following the fall of the New Jedi Order. Whether Kylo Ren succeeded is unknown, but as The Mandalorian and The Book of Boba Fett progress, we may discover Grogu’s fate.

Does Grogu Survive Kylo Ren? (How?)

The destruction of the new Jedi Temple took place in 28 ABY, placing Grogu at 69 years old. We know Yoda’s species ages faster after age 50 since Yoda became at least a Padawan before his 90th birthday.

However, we don’t know how well-versed Yoda was in the Force during his formative years. We know that Grogu, even as a young child at age 50 during The Mandalorian in 9 ABY, wielded the Force well by levitating mudhorns and deflecting fire blasts.

Despite Grogu’s power-wielding the Force, he still had issues. As a child, he often passed out following times when he exerted too much, such as with the incident regarding the mudhorn.

Grogu also wasn’t afraid to use the dark side, evidenced when he Force choked Cara Dune when he thought she hurt Din Djarin.

While Kylo Ren’s powers grew when he fell to the dark side, he was also among the New Jedi Order’s most talented students in lightsaber combat. Ren’s Force-wielding ability was so great it scared Luke Skywalker even before falling to the dark side.

While we are not sure whether Grogu survived Kylo Ren if the two encountered one another, we know the odds rest in Grogu’s favor. Grogu wielded the Force with expertise as an infant without much formal Jedi training. Hardly any Jedi can claim Grogu’s feats.

Although he may not even have reached adolescence by age 69, Grogu was such a talented Force-wielder that he would have honed his powers by then, regardless if he received formal Jedi training.

Or, what’s not to say Grogu learned under a Jedi not named Luke Skywalker between 9 ABY and 28 ABY?

Grogu’s Force-wielding ability would have allowed him to escape Kylo Ren. While Ren used only dark side abilities, Grogu acted more like a Gray in utilizing both sides of the Force. This would give Grogu a chance to escape Ren if the two encountered one another.

Time will tell as to whether Kylo Ren encountered and killed Grogu. If he ended up killing Grogu, he did so because of the mysterious being’s Force-sensitivity, and Ren wanted to eliminate all traces to the light side.

Grogu is also a powerful Force-sensitive, even as a young child. Given his natural Force-sensitivity, Grogu could have survived an encounter with Kylo Ren, even if the latter’s Force-wielding abilities rivaled his uncle’s and grandfather’s.