In a central scene from Star Wars Episode IV: A New Hope, Obi-Wan Kenobi negotiates with Han Solo for a flight on the Millenium Falcon from Tatooine to Alderaan.

The cost shifts between 10,000 and 17,000 credits. As Luke Skywalker protests, the first figure is enough to buy his own spaceship.

Star Wars thus uses a credit system, but the value of money can fluctuate. In the spinoff show, The Mandalorian, credits along with other currencies are used.

So, how does money work in Star Wars and The Mandalorian?

While there are main forms of currency used in Star Wars and The Mandalorian, other forms of money like the Calamari Flan sometimes take precedence. 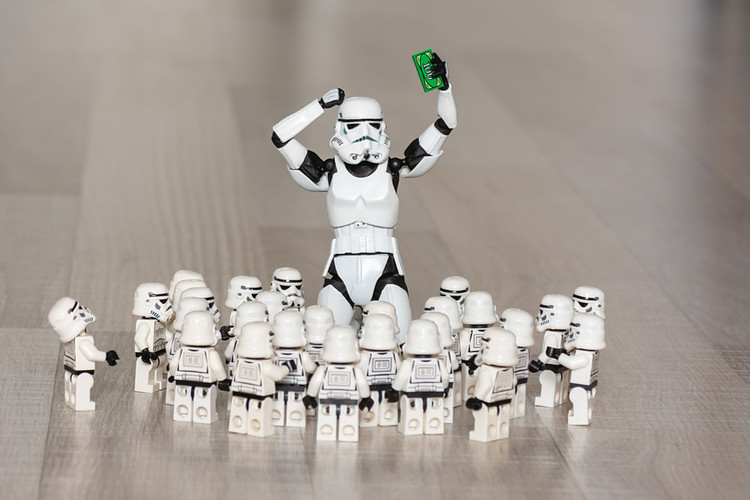 Money in Star Wars is circulated on a regional level. Currency is distributed within particular territories and monitored by regional authorities.

There are two main currencies in the Star Wars galaxy that are used on this regional basis.

The first is the Republic credit or the galactic credit. This is the standard form of money used in the Galactic Republic.

The Republic, Imperial, and New Republic credits are accepted as currency on most major planets. People carried these credits on them with credit chips.

Credit ingots are another way that Republic to Imperial credits were issued. These ingots are described as small, rectangular bars with gold and silver coloring.

They tended to be stored in vaults and heavily guarded when transported to other locations.

However, planets in the Outer Rim Territories sometimes rejected credit money. For example, the junk dealer Watto did not accept Republic credits. So, another form of currency called the wupiupi circulates in the Outer Rim.

The wupiupi is the second main currency in Star Wars and is used almost exclusively in the Outer Rim Territories, a sparsely populated region that is known for its lawlessness and smugglers.

Disparities of wealth between the Core Worlds and the Outer Rim Territories led to resentments and warfare, including the Clone Wars and the Galactic Civil War.

Wupiupi is a golden currency that the Hutts circulated on Tatooine, the desert planet in the Outer Rim Territory. One wupiupi coin is worth about 60 percent of a Republic credit.

The wupiupi currency was first shown in Star Wars Episode I: The Phantom Menace, and most recently in the Obi-Wan Kenobi television series.

In some locations of the galaxy, the wupiupi takes priority over credits.

Other Currencies in Star Wars and The Mandalorian

There are other forms of currency used in the Star Wars galaxy and The Mandalorian series. Druggats are an alternate currency that was used during the Clone Wars.

For example, a Magna Guard battle droid paid twenty druggats to use the offices of a Toydarian on the planet Utapau.

The Batuuan Spira is an older form of currency used at the Black Spire Outpost on the planet Batuu in the Outer Rim Territories.

The Battuan Spira is a hexagonal chip with either yellow or silver metal that has the word “Spira” and the letters “BSO” inscribed on it to indicate its Outpost.

And then there is the Calamari Flan, a disc-shaped white and blue currency that the Mandalorian bounty hunter Din Djarin accepted as payment for bounties.

Soon after the Empire collapsed, Din Djarin refused the Imperial credits offered by Greef Karga and asked for Calamari Flan instead for his payment for capturing four bounties.

As an agent of the Bounty Hunters’ Guild, Karga offered Calamari Flan even though Karga only had enough of this currency to cover half of the bounty.

Since the Mandalorian accepted, this exchange reflects the value of Calamari Flan in the post-Imperial age.

This form of currency also reflects that money in the Star Wars galaxy is volatile and shifting. While Republic and Imperial credits are usually accepted, other currencies sometimes take priority.

Money and The Mandalorian

Money plays a central role in The Mandalorian. After all, Din Djarin is a bounty hunter and needs to earn enough money to support himself and pay for his expenses. He also needs a currency that retains its value.

As noted above, the Mandalorian is usually paid in Imperial credits or Calamari Flan, and he prefers the latter.

He also receives payments in Beskar ingots, which is the metal that is also used for his armor. This Beskar currency holds the most value for Din Djarin, but he goes for Calamari Flan next.

In the Star Wars galaxy, money is not always stable because of the political changes that occur.

The Mandalorian takes place after the Empire had collapsed following the Battle of Endor. Imperial credits still circulated, but inflation had impacted their value.

On the other hand, the New Republic is on the rise, as reflected in The Mandalorian show by a favorable credits-to-flan exchange rate. The Calamari Flan, in particular, retains a greater currency value than Imperial credits.

The Calamari Flan comes from the Mon Calamari civilization. This is an amphibious race that produced capital ships for the Rebels and later the New Republic.

This civilization also had great commanders like Admiral Ackbar who fought against the Empire.

Hence, Din Djarin is aware of how money works in the post-Imperial galaxy and desires a currency that holds its value better than Imperial credits.

It appears that when the power of the Empire diminishes, the purchasing power of credits also declines because of a lack of trust in this currency.

As the Mandalorian indicates in Episode 1, he knows that “the Empire is gone.” So, we can conclude that Imperial credits have lost value.

We can also see that New Republic credits have not fully taken the place of Imperial ones.

How Can the Mandalorian Make Money with a Worthless Currency?

How Does Money Work in Star Wars and The Mandalorian?

In the Star Wars galaxy, the two main forms of currency–credits and wupiupi–usually take priority. Yet, there are competing currencies that supersede these two forms of money.

One is the Calamari Flan, and that currency is used regularly in The Mandalorian television show. The Calamari Flan even holds greater value than Imperial credits.

However, currencies do fluctuate in Star Wars. We may see a change in values, or a new form of currency in the future.