Obi-Wan Kenobi is one character who makes an appearance in the six original Star Wars films, and his age varies greatly between 32 BBY and 4 ABY. Since the first six films span over three decades in the galaxy, you may wonder how old Obi-Wan Kenobi is in the Star Wars timeline.

Obi-Wan Kenobi was born in 57 BBY, placing him at 25 years old when the films kicked off in 32 BBY, and 61 in 4 ABY, during the events of the sixth film. Kenobi was also 16 years older than his apprentice and later enemy, Anakin Skywalker/Darth Vader.

How Old is Obi-Wan in Episode I? 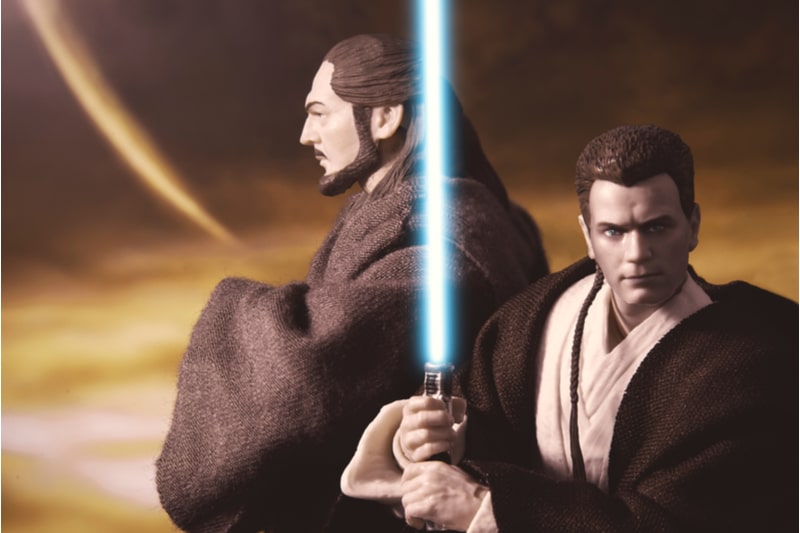 Obi-Wan Kenobi made his earliest appearance in the Star Wars timeline in Episode I: The Phantom Menace. Born in 57 BBY, Obi-Wan is 25 years old in this film, and he is the Padawan of Jedi Master Qui-Gon Jinn.

He and Qui-Gon discover Anakin Skywalker and escort Queen Padme Amidala to Coruscant, where Senator Palpatine later convinces Amidala to motion a vote of no-confidence against Chancellor Valorum.

Queen Amidala wants a vote of No Confidence!

Obi-Wan and Qui-Gon later confront and duel Darth Maul. Maul impales Qui-Gon, but Obi-Wan, for the moment, appears to kill the Sith Lord. He later assures a dying Qui-Gon that he will train Anakin.

In The Clone Wars

The Clone Wars started in 22 BBY at Geonosis, 10 years after the events of The Phantom Menace. In Episode II: Attack of the Clones, Obi-Wan is a 35-year-old Jedi Knight tasked with training Anakin, who is now a Padawan.

While Obi-Wan Kenobi has a few cool storylines thanks to the TV series The Clone Wars, let’s focus on his actions during Episode II. Here, he and Anakin are tasked with protecting Padme, who recently survived an assassination attempt.

After a second assassination attempt, the Jedi Council deploys Kenobi to locate the individual responsible. After ending up on Kamino, he stumbles upon a developing clone army using Jango Fett as their template.

Obi-Wan believes Jango is the one responsible for the assassination attempts. After a quick confrontation, Kenobi follows Jango to Geonosis, where he stumbles upon a Separatist gathering. This leads to a confrontation with the Separatist leader, Count Dooku.

Dooku informs Obi-Wan that a Sith Lord is controlling the Galactic Senate and offers to join forces. Obi-Wan rejects Dooku, and soon after, Anakin and Padme try to rescue the captured Jedi Knight.

This later leads the two Jedi to duel with Dooku, who wounds the duo. Yoda steps in and defeats his former Apprentice, rescuing Obi-Wan and Anakin.

In Revenge of the Sith

Episode III: Revenge of the Sith takes place in 19 BBY. This puts Obi-Wan at 38 years old. Now a Jedi Master with a seat on the Council, Obi-Wan again teams up with Anakin to rescue Chancellor Palpatine from General Grievous during the Fight over Coruscant.

While Grievous escapes, the two Jedi again duel Dooku, but Obi-Wan is knocked unconscious in the struggle. Anakin, however, gets the best of and murders the Sith Lord.

Later, the Jedi Council assigns Obi-Wan to locate and confront Grievous. Their ensuing duel results in Grievous’ death, but soon after, Obi-Wan’s clone troopers betray him as Palpatine, who swayed Anakin to the dark side, implements Order 66.

Stowing himself on Padme’s ship, Obi-Wan lands on Mustafar to confront his former apprentice. The two engage in a heated lightsaber battle. Kenobi wins, severing Vader’s limbs and leaving him for dead after flames engulf the Sith Lord.

Obi-Wan witnesses Padme dying in childbirth, then converses with Yoda and Bail Organa on how to best hide the twins, Luke and Leia. He eventually delivers Luke to his step aunt and uncle on Tatooine and goes into exile. 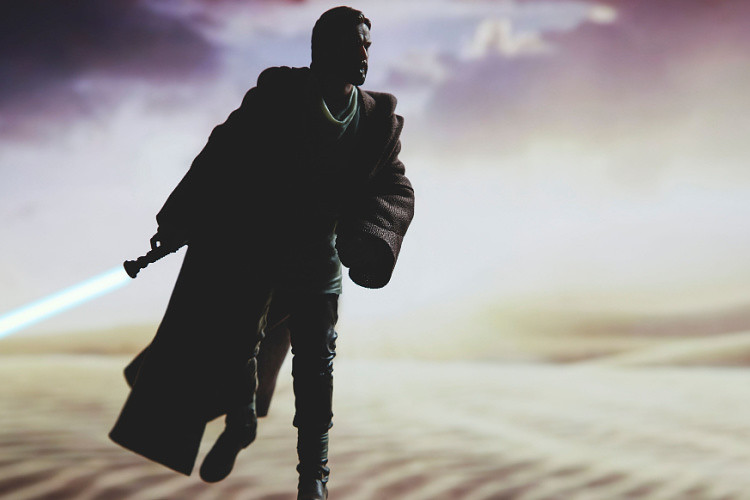 The miniseries Obi-Wan Kenobi takes place in 9 BBY, 10 years after Episode III. This puts Obi-Wan at 48, and he has spent the last decade losing his Force connection and watching over Luke Skywalker.

When Leia Organa is captured, her adoptive father, Bail, pleads for Obi-Wan’s help. Obi-Wan agrees, and his mission ultimately leads him to reclaim his Force-connectivity and confront Vader while rescuing Leia in the process.

Obi-Wan and Vader again duel, with Kenobi getting the best of his former Padawan once again. However, he also realizes that Vader fully immersed himself in the dark side. He pays the Organas a visit, promising to help them if they ever need him.

How Old was Obi-Wan When He Died? 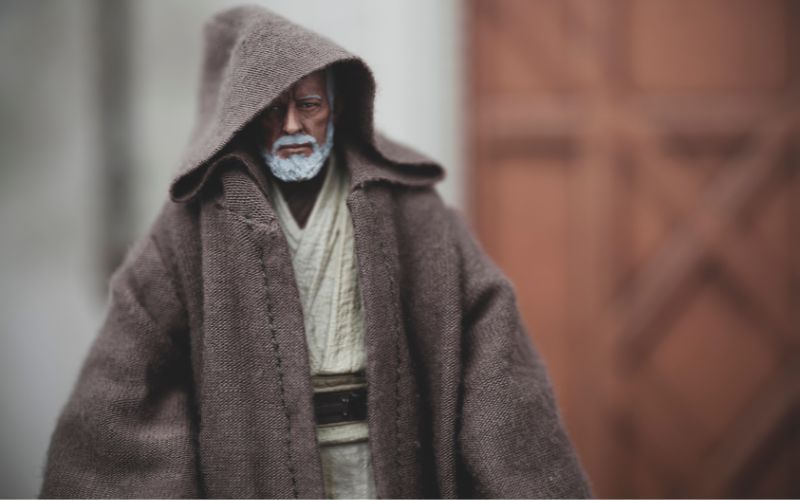 Obi-Wan died at age 57 during Episode IV: A New Hope, in 0 BBY. Leia once again needs his help, and Obi-Wan, this time with Luke Skywalker accompanying him, does not hesitate.

Obi-Wan disables the beam, but ends up in yet another duel with Vader, and this time lets the Sith Lord kill him. This allows Obi-Wan to guide Luke as a Force spirit during the ensuing Battle of Yavin.

With Obi-Wan’s instruction, Luke uses the Force to place torpedoes into the Death Star’s exhaust port, destroying the superweapon.

In Episodes V and VI

Episode V takes place in 3 ABY, making Obi-Wan 60 years old. In Episodes V and VI, he is a Force ghost, and he appears on the ice planet Hoth, instructing Luke to find Yoda on the swamp planet Dagobah.

Yoda, initially reluctant to take Luke as an apprentice, relents when Obi-Wan’s spirit convinces the former Jedi Grand Master otherwise. Shortly afterward, Luke has a vision of his friends captured in Cloud City on Bespin, and he leaves his training to rescue them.

Kenobi, concerned that Luke was the Jedi’s last hope, laments, but Yoda reminds him that, “there is another.”

Luke returns to Dagobah in 4 ABY during the events of Episode VI, which puts Kenobi at 61 years old. Despite returning, Luke can not complete his training on Dagobah since Yoda dies shortly afterward.

Kenobi’s spirit again appears, telling Luke that he must confront Vader before revealing that Leia is Luke’s twin sister. He also informs Luke why they were separated at birth.

Kenobi’s final appearance in Episode VI comes following the Battle of Endor, as he, Yoda, and Anakin Skywalker look on as the Rebels celebrate their victory over the Empire.

How Much Older is Obi-Wan Than Anakin? 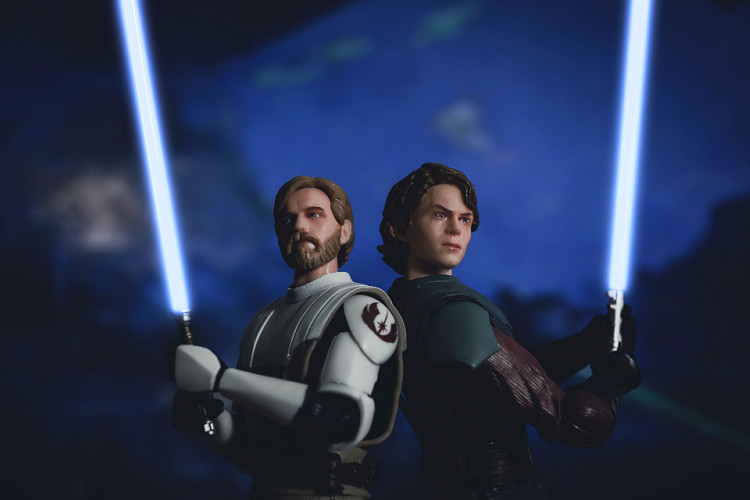 Anakin was born in 41 BBY, making him 16 years younger than Obi-Wan. He was just nine when Obi-Wan and Qui-Gon discovered him on Tatooine, 19 in Attack of the Clones, and 22 in Revenge of the Sith.

Who are Obi-Wan Kenobi’s Actors?

Since Ewan McGregor was just six when A New Hope was released in 1977, he was far too young to play an aging Obi-Wan Kenobi. That honor went to Alec Guinness, who reprised the role for The Empire Strikes Back and Return of the Jedi.