In Star Wars Episode I: The Phantom Menace, we meet the character Watto. He is a blue, portly junk shop owner on Tatooine. Most would find him to be detestable and greedy.

He is best known for owning Anakin Skywalker and his mother Shmi as slaves. We know Anakin took vengeance on the Sand People for how they treated his mother. This makes us wonder if Anakin ever returned to Tatooine for revenge against Watto.

Mystery surrounds what ultimately happened to Watto. One central question is: What did Darth Vader do to Watto? The main Star Wars films do not provide an answer, but a book and comics do indicate that Vader took vengeance. 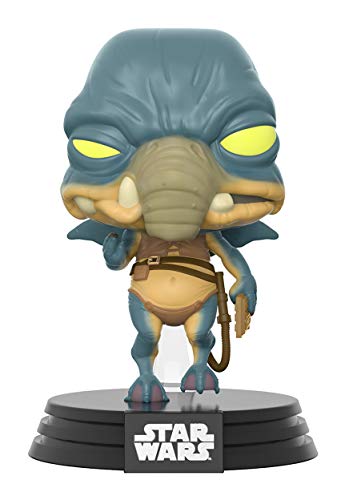 Watto was a villainous junk dealer on Tatooine. He worked in the city of Mos Espa buying and selling droid parts and other used pieces of equipment. He learned about trading and bargaining by working with the Jawas.

Watto originally came from the planet Toydaria, where he was a soldier in the Ossiki Confederacy Army. After coming to Tatooine, Watto targeted those who were not from the planet to swindle them.

As a boy, Anakin soon proved himself to be valuable to Watto. Anakin was not only a skilled mechanic but could podrace. Watto took advantage of Anakin’s podracing skills and placed bets on the boy.

Watto forced Anakin to race in several podrace tournaments. Watto had won ownership of Anakin Skywalker and his mother Shmi from a previous podracing bet.

With the help of Jedi Qui-Gon Jinn, Anakin won his freedom by winning a podrace where Watto had bet against Anakin.

Watto kept slaves to help run his junk shop on Tattoine. That is one indication of his cruelty. Watto secured quarters for his slaves on Slave Quarter Row, a crowded section of Mos Espa on the outskirts of the city. This is where Anakin and his mother lived.

Watto to Qui-Gon Jinn: Mind tricks don't work on me. Only money

Watto even had explosive chips installed in his slaves that would detonate if they attempted to escape. Watto also frequently scolded and beat his slaves. Anakin became a primary target of Watto’s anger.

Watto was not remorseful over keeping slaves. Anakin and Shmi Skywalker worked for years under him to serve his greed. Watto even tried to retain Anakin after the latter had won his freedom. Qui-Gonn had to threaten Watto with getting the Hutts involved for him to release Anakin.

Watto was also cruel because he held onto Anakin’s mother Shmi even after Cliegg Lars, a moisture farmer, offered to purchase her for more than the value of a slave. Watto eventually gave into his greed, but not right away. His cruelty temporarily won out.

Before Watto came to Tatooine, he was already cruel. As a soldier with the Ossiki Confederacy Army, Watto used chemical warfare to disrupt the food supplies of opponents, who were also Toydarians.

What Did Darth Vader Do to Watto?

Anakin Skywalker came back to Tatooine and visited Watto’s shop to find out information about his mother Shmi. Watto figured out who this Jedi really was and told him that Shmi had been sold to the moisture farmer Cliegg Lars. On this occasion, Anakin left without harming Watto.

However, the book Jedi v. Sith: The Essential Guide to the Force by Ryder Windham alludes to a moment of vengeance by Darth Vader. This book uses a journal by Darth Vader as evidence that he killed Watto.

In the journal, Vader indicates his hate for Toydarians, meaning Watto, and his desire to strike them/him down. According to this video about the book, Vader tortured the Toydarian Watto and eventually ended his life.

The Darth Vader comic series echoes these conclusions. This video about a 2015 comic issue also comments on how Vader returned to Tatooine and killed Watto. The Toydarian in the comic looks like Watto and was apparently Force choked by Vader.

This issue is part of a series that Marvel published in 2015 called Darth Vader. This series focuses on Vader’s life after learning about Luke’s existence and after the Death Star’s destruction. It reveals Vader’s wrath.

Thus, this book and comics show the vengeful side of Vader more than the movies do.

If we go by the Star Wars movies, Vader does take vengeance on the Tusken Raiders who held and tortured his mother Shmi, but we do not see him punish Watto, his former slave owner.

When we refer to the comics and a book on Vader, however, we see that Vader did take vengeance on Watto. If we go by these sources, Vader destroyed Watto.