Obi-Wan Kenobi was known as one of the staunchest supporters of the Galactic Republic and the Jedi Order. He was also a character that, had he fallen to the Sith, would have sent shockwaves through the Star Wars fandom.

But you may wonder what would have happened if Obi-Wan joined the dark side when Anakin Skywalker pledged himself to Palpatine in 19 BBY. If this thought has crossed your mind, I have quite an interesting scenario for you.

In this scenario, Anakin would have preyed on Obi-Wan’s own losses, going as far as to claim anyone else he looked up to or loved would not meet the same end as Qui-Gon and Satine Kryze. Obi-Wan would then relent, join forces with Anakin, and help purge the Jedi.

Why Would Obi-Wan Join the Dark Side?

Obi-Wan Kenobi was a model Jedi to many, living strictly by the Jedi Code. But when you look at the Jedi he interacted with the most, Qui-Gon Jinn and Anakin Skywalker, Obi-Wan easily could have held the Jedi in lower regard.

We know some referred to Qui-Gon as a Gray because of his refusal to live strictly by the Jedi Code, something Obi-Wan points out in The Phantom Menace. Qui-Gon saw flaws in the Jedi, and while Obi-Wan did not, he was still aware of how Qui-Gon viewed the Order.

However, this wouldn’t have fully turned Obi-Wan, given his reaction when he discovered that Anakin had joined the dark side in Revenge of the Sith.

In this alternate timeline, Obi-Wan would still confront Anakin, now known as Darth Vader, on Mustafar, and they would still have their epic duel.

During the duel, Vader would be more open with Obi-Wan regarding his turn to the dark side, which was to save Padme from dying in childbirth. He would explain that the Jedi would have never helped him or Padme.

Obi-Wan has a flashback to the times Qui-Gon questioned or was at odds with the Jedi. Vader also reminds Obi-Wan about the Jedi Master’s own love interest, killed by Maul during the Clone Wars. He claims that, if the Jedi allowed for open relationships, she could probably still be alive.

Angered, Obi-Wan closes his lightsaber and the two travel back to Padme, who regains consciousness following Vader’s earlier Force choke. However, after witnessing the evil in both Vader and Obi-Wan, Padme still dies in childbirth, further angering the duo.

This leads to a confrontation with Palpatine. Since Vader never lost to Kenobi, he has no need for his painful suit, and he strikes down the Emperor during a heated duel that also includes Obi-Wan.

Instead of Master and Apprentice, however, the duo end the Rule of Two and the Sith take full control of the galaxy. Yoda, instead of Obi-Wan, brings Luke to Tatooine and watches over him instead of going to Dagobah. Bail Organa still takes Leia to Alderaan.

One forgotten character in this scenario that we must talk about is Maul. In the original timeline, Maul was a Sith Lord, yet because Palpatine overthrew him, he wanted to get even with Palpatine and prevent the creation of the Empire.

Maul died in 2 BBY following a quick duel against Obi-Wan on Tatooine. But since Obi-Wan is with the dark side and Yoda is watching over Luke, Maul never dies on Tatooine. Obi-Wan was always Maul’s target, and this does not change when Obi-Wan is a Sith Lord.

Therefore, Maul will continue to pursue Obi-Wan and Anakin, seeking to exert his own dominance over the galaxy. From a young age, Luke also feels Maul’s presence as a dark force, and this dark force will follow him throughout the Original Trilogy.

Events of the Original Trilogy

Just as we saw in the Original Trilogy, Luke would still cross C-3PO and R2-D2, though Leia would call out for Yoda, who rescued her in 9 BBY instead of Obi-Wan Kenobi.

Basically, the Obi-Wan Kenobi miniseries would instead pertain to Yoda as the main protagonist, perhaps even involving a duel between him, Obi-Wan, and Vader during the climactic scene, which Yoda would win.

When 0 BBY rolled around, Luke would cross Yoda, who would play Leia’s message. And Yoda, not Obi-Wan, would train Luke to become a Jedi.

Empire Strikes Back Yoda training Luke part 3 "Try not. Do. Or do not. There is no try." (HD)

The two would meet Han Solo, who would get them to Alderaan, and the Death Star’s tractor beam still captures the group. Yoda would duel Obi-Wan and Vader, sacrifice himself as the tractor beam is disabled, and allow the rest of the crew to escape to Yavin IV.

The Empire Strikes Back

Yoda’s Force ghost would guide Luke, who would still destroy the Death Star, and A New Hope would end similarly to how it ended in the original timeline. Three years later on Hoth, before hypothermia overtakes Luke, Yoda would appear to Luke and tell him to retreat to Dagobah.

Here he would learn the ways of the Force under his Force ghost and the Force ghost of Qui-Gon Jinn. Jinn would explain to Luke that Obi-Wan Kenobi, under a presumed Darth who we’ll call Darth Rhine, and Darth Vader betrayed and murdered both Anakin and Obi-Wan.

Unlike Yoda’s hesitancy to train Luke in The Empire Strikes Back, Qui-Gon would willingly train him since he would see a lot of Anakin in Luke. In the actual Original Trilogy events, Yoda felt Leia was the better fit, citing Luke to be too much like Anakin, but Qui-Gon would prefer this.

Since Qui-Gon did not live 100% by the Jedi Code, this would give him preference for Luke over Leia. And with Yoda having already had experience training Luke, he too would go along with it.

Luke would still abandon his training for Cloud City on Bespin when he discovers his friends are in trouble. He would still confront Vader, yet duel with both him and Rhine, with Luke discovering the truth that Vader is Anakin Skywalker, and he would also uncover Obi-Wan’s identity.

The events in Return of the Jedi remain as they are, with Luke rescuing his friends from Jabba the Hutt and reuniting with the Rebels.

He then goes back to Dagobah, hoping to complete his training, but the Force spirits of Qui-Gon and Yoda say to complete it, he must confront Vader and Rhine.

Luke will rendezvous with Han Solo, and the Rebels find out Vader and Rhine implemented plans to build a second Death Star, which now has an energy shield surrounding it.

Luke goes with Han Solo, Leia, and Chewbacca to Endor to dismantle the shield generator, which will let the Rebels move in to destroy the second Death Star. Luke still tells Leia that they are brother and sister, that Vader is their father, and that Rhine was Vader’s former Jedi Master.

He also states his plans to confront Vader and Rhine to try and bring them back to the light side. Luke still surrenders to Imperial troops to face the duo, crossing Vader first, who continues to embrace the dark side despite Luke trying to convince him otherwise.

Vader takes Luke to Rhine, where the former Jedi Masters show off the second Death Star’s capability by destroying a Rebel ship.

As in the Original Trilogy, there is a scene intended to coerce Luke into giving into anger, and allowing it to flow through him, except Rhine and Vader both tempt Luke. However, Luke nearly gives in by trying to attack Kenobi.

Where Has Maul Been Hiding?

Maul, the cunning and clever character he is, has watched this entire show from afar, waiting for the opportune moment to strike. He works his way onto the same ship where Luke is meeting with Rhine and Vader. 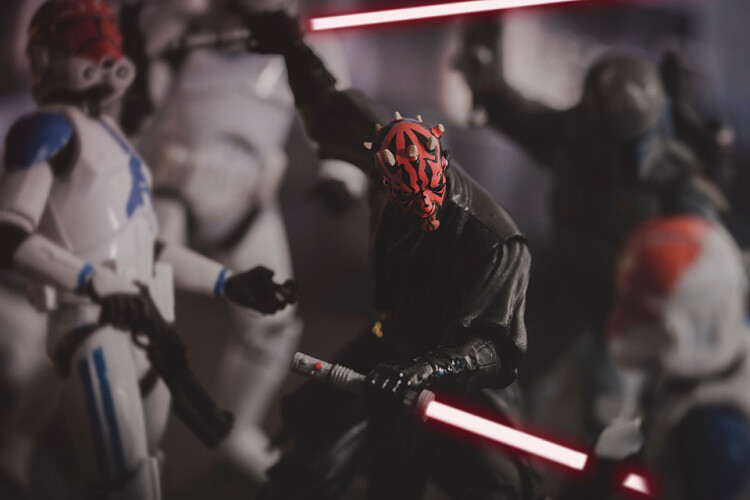 Stormtroopers try to apprehend the former Sith Lord, but Maul’s power and anger is too much. He destroys the stormtroopers much in the same fashion Yoda and Obi-Wan fought off the clone troopers at the Jedi Temple in Revenge of the Sith.

This gives Maul time to let this confrontation play out. Then he could end Luke, Vader, and Rhine, and claim the galaxy for himself.

Angered, Luke strikes. But Rhine, ready for the attack, moves out of the way and brandishes his lightsaber, leading to a two-on-one duel between Luke and the two former Jedi. During the fight, Luke continues to try and convince the two to accept the light side, but they refuse.

He gains the upper hand, showing his Force capability is on par with Rhine’s and Vader’s, despite receiving little Jedi training. Despite his constant overpowering of the duo, Luke refuses to kill, stating he knows there is still good in them.

Rhine and Vader, however, continue to advance, until Luke strikes Vader with a blow that severs the Sith Lord’s hand, the prosthetic that Anakin was already wearing in the original timeline.

Luke again nearly lets his anger consume him and moves in to kill Vader, but stops short, stating he won’t kill his father.

Luke turns to leave the duo, but Maul bursts in, forcing Luke to again wield his lightsaber to save himself from Maul’s wrath. Given the history between the two, Rhine also joins in the fight, intent on defeating his rival for good.

Maul resorts to Force lightning, striking Luke and Rhine. Vader picks up Luke’s lightsaber and, as Obi-Wan did in The Phantom Menace, slices Maul, but sends the former Sith Lord to his death down the reactor shaft. 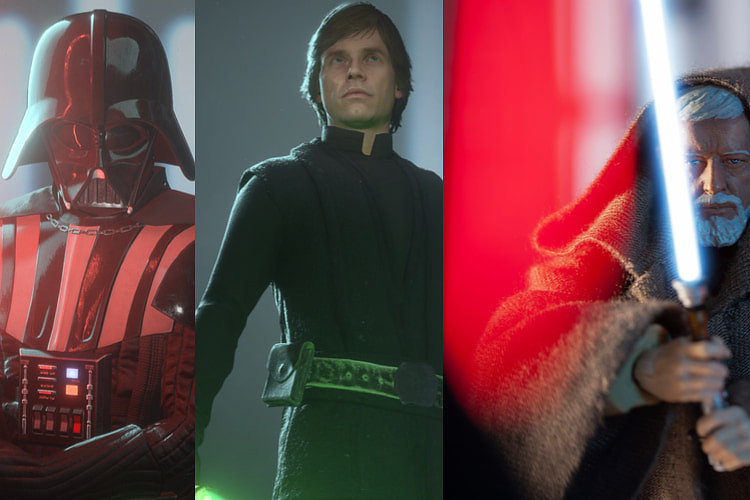 The action reverts both Rhine and Vader back to the light side. Luke leads the trio in their escape back to Endor, where Luke reveals the dark force stalking him the entire time was a former Sith Lord named Maul, Kenobi’s former enemy.

Vader, once again known as Anakin, and Obi-Wan are pardoned for their crimes throughout the war for their heroics against Maul and for simultaneously ending Sith rule. Little do they know, however, that Maul, and not Palpatine, had been busy constructing vessels on Exegol.

Maul would wait until he came across a vessel strong enough to hold his consciousness, but in the meantime, Kenobi, Luke, and Anakin would be busy reconstructing the Jedi Order.