Sabine Wren gave the Darksaber, or black lightsaber, to Bo-Katan Kryze. But was it even hers to give?

Before we can answer that, let’s go over what we know about the Darksaber and what it means in Mandalorian culture.

History of the Darksaber 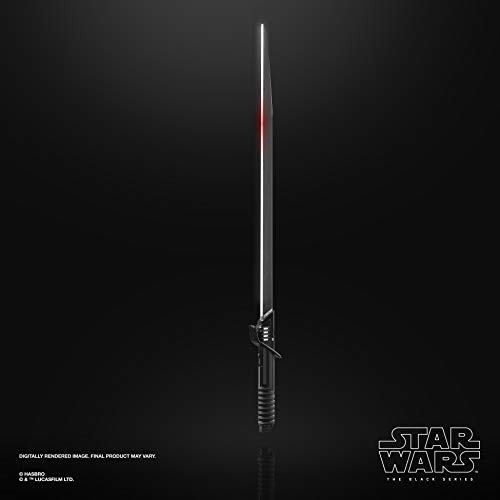 The Darksaber was made by the only Mandalorian to become a Jedi, Tarre Vizsla.

Details about this Mando/Jedi are scarce, but we know that he was the leader of the Mandalorians, and the Darksaber was seen as proof of leadership, similar to how some cultures used crowns or crests.

Upon Tarre Vizsla’s death, the Jedi decided to keep the Darksaber in the temple to honor his memory. But Mandalorians are very focused on family and clan.

They believed that the Darksaber, just like their armor, should be passed onto future members of House Vizsla. The Jedi’s decision to keep the Darksaber sparked a war between the two groups.

The Mandalorians eventually succeeded in taking it, but this is where things get complicated. In Star Wars: The Clone Wars, Rebels, and The Mandalorian, one must defeat the current owner of the Darksaber in 1 vs. 1 combat.

Yet, Rebels made it clear that the Mandalorians violated this rule by taking the Darksaber. (Though Pre Vizsla would call it liberating instead of stealing).

This theft started a war. House Vizsla has used the Darksaber as their symbol for generations, but there was no duel between a Jedi and a Mandalorian for possession of the Darksaber.

Since we don’t know how Tarre Vizsla died, we can assume that the Grandmaster of the Jedi would be its rightful owner. The Mandalorian code even backs this up.

Mandalorains pride themselves on being the best warriors, so whenever someone challenges them to a duel, they must accept it.

For example, when Maul challenged Pre Vizsla to a duel, all of the Mandalorians stepped back. Pre Vizsla accepted and lost everything.

However, when Maul declared himself the ruler of Mandalore, Bo-Katan and a few other Manadlorians refused to accept him, stating that Maul was an outsider and the throne couldn’t belong to him. This goes against everything the Mandalorian code stands for.

Maul won the duel fairly. He didn’t use the Force, except to pull the Darksaber to him after the duel was over.

I haven’t found any rules saying if the wielder gets a grace period, or if you have to wait before challenging for the Darksaber. Which means that Bo-Katan, or anyone else, could have challenged Maul right there for it.

If he was being serious about leading the Mandalorians (and he did rule the planet for some time), then he would have agreed. He wasn’t injured. He was barely winded and all weapons and tactics were allowed. But Bo-Katan didn’t challenge him.

She and the others ran. But someone did beat Maul while he still possessed the Darksaber: Darth Sidious, his former master.

This fight had nothing to do with gaining possession of the Darksaber. Sidious went to Mandalore to kill Maul and Savage Opress, Maul’s brother.

He killed Savage and defeated Maul, but before he could kill him, Maul managed to get away with the Darksaber.

Which means that he still lost the fight and ownership of the Darksaber now went to the Emperor. We wouldn’t see the Darksaber again until Rebels.

During Rebels, Maul is intent on making Ezra Bridger his apprentice, but Ezra keeps refusing. He sees the Darksaber in Maul’s hut and helps Sabine Wren take it. (This was another theft and Sabine knew better).

The Darksaber would pass between Ezra, Sabine, and Kanan Jarrus (Ezra’s master who only kept the Darksaber until he felt Sabine could handle it).

Not only did Sabine not have the right to wield or give it away, she didn’t want the Darksaber. Because she built a weapon that was tested on the Mandalorians, she believed she wasn’t worthy of leading her people.

She agreed to wield it until she could give it to Bo-Katan.

Who Did Sabine Give The Darksaber To?

Why Did BO-KATAN Take the Darksaber from Sabine But NOT MANDO? - Mandalorian Season 2 Episode 8

In The Mandalorian, we learn that she somehow lost possession of the Darksaber to Moff Gideon.

It’s highly likely that these two fought since Gideon tells Din Djarin (our Mando) that the Darksaber can’t be given, it must be won in combat. (This isn’t true. The Darksaber is an heirloom and it can be given away, as long as the current possessor is the true owner).

Din Djarin is the current wielder of the Darksaber. But he’s not the true owner because Moff Gidieon wasn’t the owner.

Who is the True Owner of the Darksaber?

We know that when Palpatine died, Darth Vader became the Darksaber’s owner, though he didn’t know it and he was trying to save his son’s life.

Sadly, Vader died soon after, which brought us to Luke Skywalker, his first-born son and heir. (Leia was younger so she would have had to challenge Luke for the Darksaber, if either of them had known it existed).

But both of the Skywalker siblings have died by the end of Episode IX: The Rise of Skywalker. So the Darksaber would pass to Ben Solo, Leia’s son. (It appears that Ben was Leia and Han Solo’s only child, but we’ll see if Disney changes that).

Ben dies at the end of The Rise of Skywalker, which brings us to Rey. If Grogu is alive then he would have a claim as well. Some also claim that Ezra should have the Darksaber since Maul considered him to be his apprentice.

But this claim became void when Maul lost, and because Ezra kept refusing him.

Before I end the article, I need to point out one more thing regarding the throne of Mandalore.

Before the Darksaber was made, the Mand’alor, ruler of the Mandalorians, was known by a special mask.

This mask was said to belong to Mandalore the Indomitable. It acts in the same way as the Darksaber: one must duel for it or be given it by the true owner.

But, there’s no rule that says either item must be present or used during the duel for possession of it. At the moment of this writing, the mask remains in legends.

However, that may soon change as Star Wars: Knights of the Old Republic will be remastered for the PlayStation 5. Will the mask make its way into The Mandalorian or any of the spinoff shows?

If so, will the mask take precedence since it’s an older item in the Mandalorian culture? Only time will tell.

Another important thing about the Darksaber is its ability to accept its wielder. Dave Filoni, (producer of Star Wars: Rebels, The Clone Wars, Resistance, and The Mandalorian) confirmed that the Darksaber is alive.

Dave Filoni Reveals THIS Important Detail About the Darksaber

It knows when its wielder is being a proper Mandalorian and when it’s not wanted. (Which is why Din Djarin is having problems wielding it.)

It’s been said that Maul left it in his hut because he was no longer fit to rule. But that doesn’t explain Sabine.

We SOLVED Why Darth Maul Stopped Using the Darksaber

She made it clear that she didn’t want to lead. Yet we don’t see her have any problems wielding it; she just had to learn how to use it.

Sabine Wren gave the Darksaber to Bo-Katan Kryze, regardless of whether she had the right to do so. The Darksaber now belongs to Din Djarin.

Given the fact that combat is the main way to get the Darksaber, being related to House Vizsla is irrelevant. Thank you for reading and remember: This is the Way.