Have you ever wondered why Darth Vader sounds different in the Original Star Wars Trilogy than he does in the Prequel Trilogy? There’s actually an easy explanation for this. Keep reading to learn more!

Darth Vader’s voice and accent changed throughout the Star Wars movies because he was portrayed by different actors. Within the story, his voice changed significantly due to his injuries on Mustafar and the suit he had to wear.

Why Does Darth Vader Speak With an Accent?

Technically, Darth Vader doesn’t have an accent; more accurately, his accent is basically American. Still, many fans have noticed that he sounds much different when he’s in his suit than he did as Anakin Skywalker. 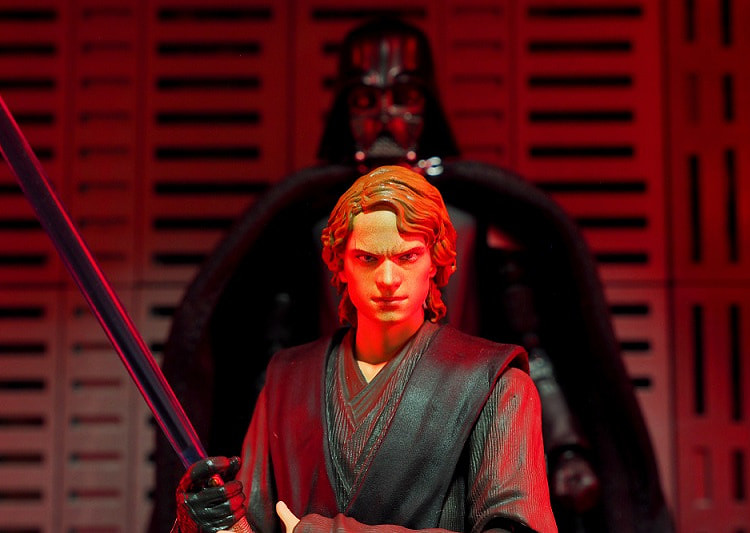 The simplest explanation for this exists outside the Star Wars universe; Darth Vader had different voices and accents because he was portrayed by different actors.

These actors were perhaps trained to speak in different ways; they also had different cultures and backgrounds and grew up in different time periods. So even though they technically had American accents, the way they pronounced certain words were slightly different.

In the Original Trilogy, Darth Vader was played by David Prowse but voiced by James Earl Jones; George Lucas wanted Vader to have a deep, resonant, intimidating voice.

Later, in the prequel trilogies, Anakin Skywalker was played as a young adult by Hayden Christensen, who of course had a much different voice than Jones; Christensen’s voice was not as deep or resonant, and it certainly had a much younger sound.

Vader was briefly voiced by a third actor: when Luke removed his helmet at the end of Return of the Jedi, Vader sounds very old and slightly British. In these scenes, he was portrayed by Sebastian Shaw, an English actor. 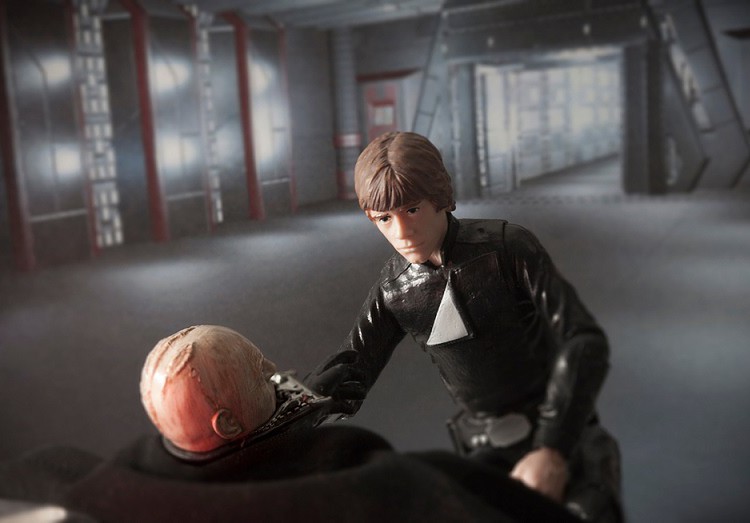 The fact that he was portrayed by multiple actors is why Darth Vader sounds so much different than Anakin Skywalker, even though they are the same character.

But perhaps you’re looking for an in-universe explanation–some plausible reason within the story for why Darth Vader speaks differently than Anakin.

Within the Star Wars universe, the best explanation for the change in his voice is that his injuries and the suit he wore affected it. It’s also possible that he was speaking with a different tone and accent to further conceal his true identity.

Let’s explore each of these possibilities.

After Vader was nearly killed on Mustafar, he was left with permanent respiratory damage that would certainly have affected the sound of his voice.

You can hear the change in his voice in the above scene from Revenge of the Sith, after Vader loses his duel with Obi-Wan. You can also hear the great change in his voice at the end of Return of the Jedi, when he speaks to Luke with his natural voice after being unmasked.

During the 23 years after he lost the duel on Mustafar, Vader had to rely on the life-support suit built into his armor. This life support system is what kept him alive. Certain parts of the suit, such as an annunciator implanted in his chest, could have changed how his voice sounded.

This article explains why and how the suit affected his speech, as well as other interesting facts about the suit.

It’s also possible that Vader began using a different voice and slightly different accent intentionally. While it’s unlikely that anyone would have recognized him as Anakin Skywalker in his head-to-toe suit of armor, he may have wanted to conceal his speech as well.

Considering he was filled with hatred and self-loathing, this concealment may have been an effort to further distance himself from Anakin–not only so that others wouldn’t recognize him, but so that he could leave his old self behind completely.

Why Does Darth Vader’s Helmet Look Like a Face? 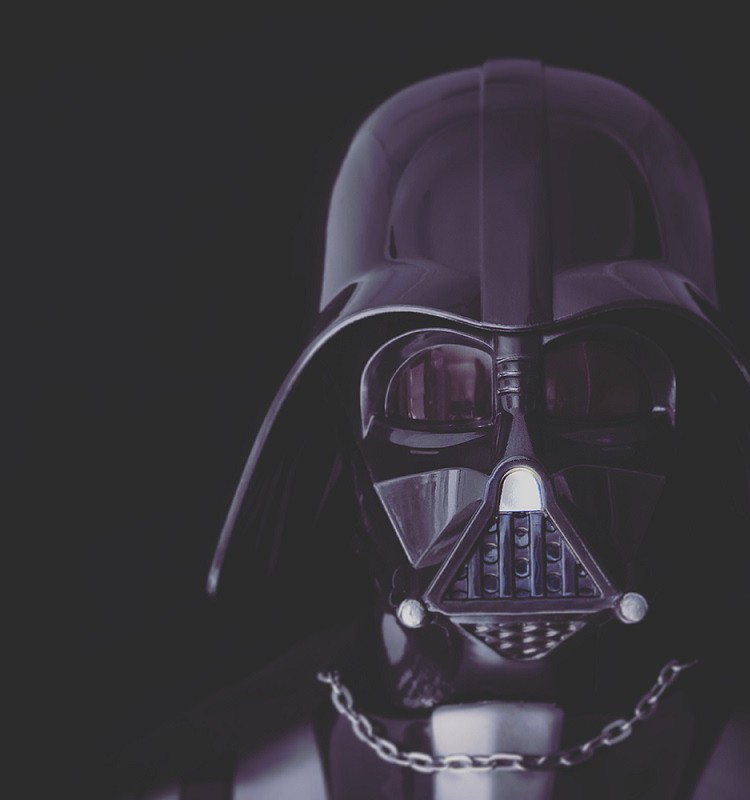 Vader’s mask and helmet were made to fit his head and face securely, like a stiff metal glove.

The mask contains large eyes, a triangular mouth-like speaker, the bridge of a nose, and a hat-like helmet. These features are, indeed, meant to resemble a face in some respects.

With this in mind, the face-like features may have been for practical purposes; the eyes aided his vision, the mouth-like speaker allowed him to speak, etc.

Vader’s mask and helmet were probably designed to look intimidating and unique; Emperor Palpatine wouldn’t have wanted him to look generic. Vader’s appearance was designed to instill fear into everyone who saw him.

Is Darth Vader a Human or a Cyborg? 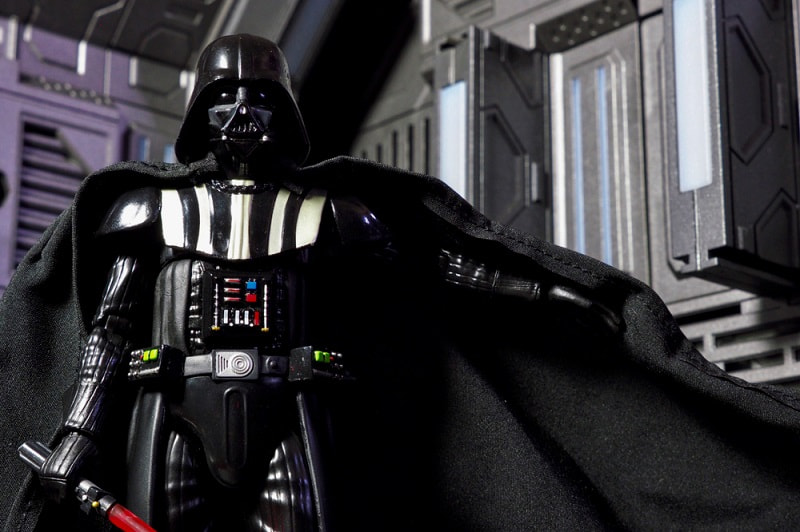 He was born a human with the given name Anakin Skywalker. In Attack of the Clones, his right arm was severed in a lightsaber duel with Count Dooku, so he received a prosthetic arm. At that point, he technically became a cyborg.

A cyborg is defined as an organic being with inorganic body parts. Years after Anakin’s duel with Count Dooku, when Luke received his own artificial hand, he also became a cyborg.

Of course, both Luke and Anakin were still more man than machine when they received their artificial arms.

At the other end of the cyborg spectrum is General Grievous, who was born a Kaleesh but was almost entirely robot by the time he made his appearance in the Prequels and The Clone Wars. 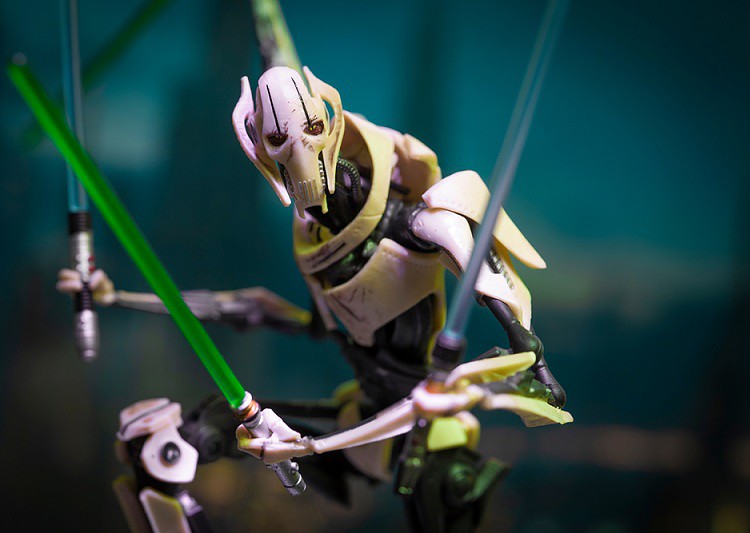 After Anakin became Darth Vader, he lost both legs and his left arm in his duel with Obi-Wan on Mustafar. He was also badly burned and disfigured.

What was left of his body was fitted with prosthetics and placed in a life-support suit.

At this point, he now had four prosthetic limbs and a suit he couldn’t survive without for more than a few minutes.

Though he had been a cyborg before, with only his artificial arm, he was now more like General Grievous–he had become more machine than man, as his organic body relied on the artificial limbs and suit to survive.

Darth Vader had a much different voice and way of speaking after he started wearing his iconic black suit. The simplest reason for this change in his voice is that he was portrayed by different actors.

Within the story itself, Vader’s voice may have changed because his vocal cords were badly damaged on Mustafar, and his suit further deepened his voice as it helped him speak.

He might have also spoken differently on purpose in an effort to distance himself from his true identity as Anakin Skywalker.