What’s not to love about Star Wars? There are epic space battles, lightsaber duels, daring rescues, supernatural powers, fantastic beasts, and even a bit of romance. And not just any romance, a love triangle romance between Luke, Leia, and Han.

But did Luke ever really stand a chance of capturing the princess’s heart?

Spoiler alert: Luke finds out Leia is his sister in Return of The Jedi. So the potential incest quashed any romantic possibilities. But that doesn’t mean Princess Leia didn’t love Luke. On the contrary, finding out he was her brother just explained the love she had already developed for him.

Why Did Luke Kiss His Sister?

At the start of the Star Wars series, Luke Skywalker is an orphan raised by his aunt and uncle on the far-flung desert planet of Tatooine. And Leia is a Princess who has just watched her entire planet be destroyed because she wouldn’t give information to the Empire. 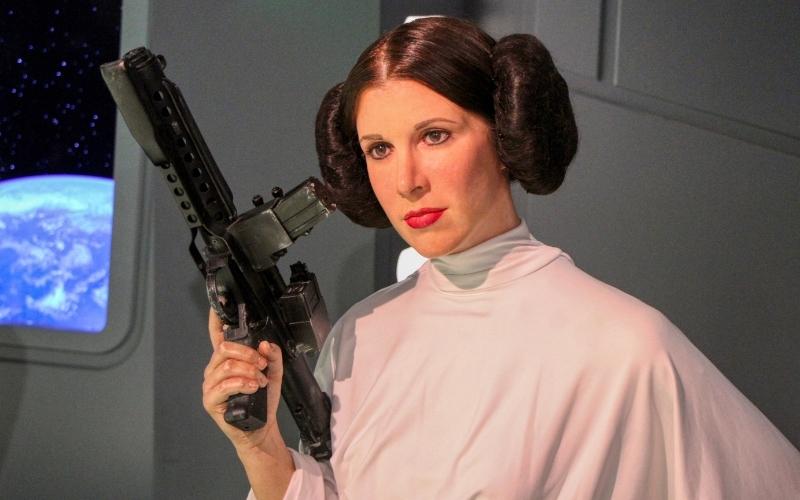 Aside from their age, Luke and Leia seem to have very little in common. But, by the time of the second movie, Luke, Leia, and Han are all great friends. Better than friends, actually. Leia shares multiple onscreen kisses with both Luke and Han.

This gets a bit weird when we find out that Leia is Luke’s sister in the third movie. If they are siblings, why do they share a kiss?

Did Luke Know Leia was His Sister?

At the start of the series, Luke does not know Leia is his sister. He doesn’t even know he has a sister. All he has ever been told is that his father is dead and that Beru and Lars are his aunt and uncle.

Later, when he encounters Ben, Luke learns that his father was a Jedi who was slain by Darth Vader. But there is no mention of a sister.

When Luke meets Leia, she is a princess, and he knows nothing about her. Despite this, Luke and Leia become fast friends.

In The Empire Strikes Back, Leia gives Luke a passionate kiss. Later, when Luke leaves Dagobah to save his friends in Cloud City, Obi-Wan and Yoda discuss that Luke is not the only potential hope, that there “is another.” But they don’t name anyone.

After Luke loses his duel with Vader, he calls out to Ben, who doesn’t respond. He then tries calling out to Leia with the Force. Leia actually hears him and is able to rescue him successfully.

The fact that Luke can contact Leia like this proves that there is a close connection between the two. But what kind of connection?

In Return of the Jedi, Luke learns the whole truth: Leia is his twin sister. When this is revealed to him, he admits that he somehow knew.

That doesn’t necessarily mean he knew they were brother and sister. He is more likely referring to their deep connection in the Force. He knew there was something between them, but he didn’t know what until Ben and Yoda told him that she was his sister.

Did Leia Know Luke was Her Brother?

Leia was raised as the daughter of Bail Organa and Queen Breha. Unfortunately, she loses both her parents as well as many friends and family during the destruction of her home planet Alderaan.

When she meets Luke for the first time, he is just a naive farm boy from a sparsely populated desert world. Still, they become close friends. 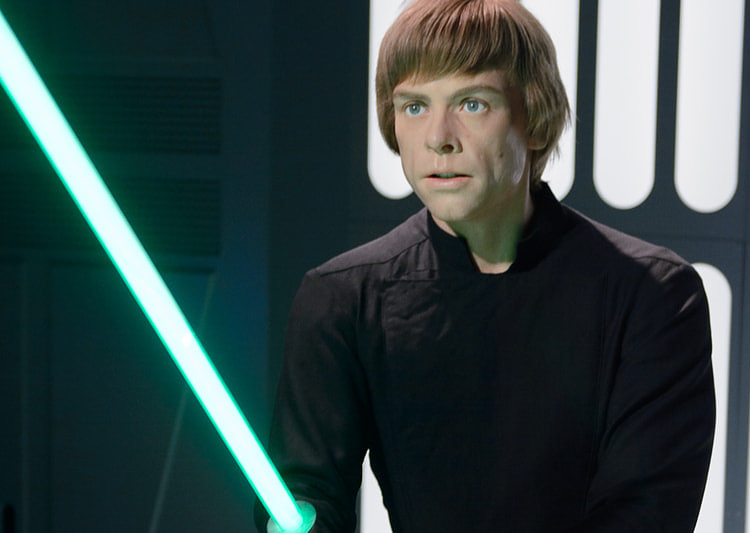 When Leia shares a passionate kiss with Luke, it is shortly after his near-death experience at the hands of the Wampa (the ice monster on Hoth). All she knows of Luke at this time is that he is a close friend, and she almost lost him. And she wanted to prove Han wrong.

Later, when fleeing Cloud City, she hears Luke calling out to her with the Force. She doesn’t entirely understand it but knows exactly where he is and is able to mount a successful rescue.

It is not until halfway through Return of the Jedi that Luke speaks with her privately and tells her that he is her brother and that Darth Vader is their father. She is devastated and in a bit of denial about the Force but admits that she somehow knew.

Like Luke, she had no way of knowing she even had a brother. But she knew there was a connection between herself and Luke, and learning the truth helped her put together the pieces.

How Many Times Do Luke and Leia Kiss?

Luke and Leia’s big iconic kiss scene is in the medbay where Luke is recovering after nearly freezing to death on Hoth. But this is not the only time they kiss.

During the Star Wars series, Luke and Leia share 5 kisses.

Their first kiss is in A New Hope when using the grappling cable to escape the stormtroopers. Leia gives Luke a quick peck on the corner of the mouth, “for luck.”

The second kiss is also in A New Hope. This more chaste kiss on the cheek is given to Luke by Leia just ahead of the attack on the Death Star.

The third kiss is the most iconic one. It’s that passionate kiss in The Empire Strikes Back that Leia uses to make a point to Han.

But it is not the only kiss in that movie. Kiss number 4 occurs when Leia rescues Luke from Cloud City. As she gets him settled in the sick bay of the Millennium Falcon, she gives him a quick peck on the lips.

For kiss number 5, we have to skip ahead a trilogy. During The Last Jedi, when Luke confronts Kylo Ren, he shares a brief moment with Leia, giving her a kiss on the forehead before departing to his ultimate death.

Who Does Princess Leia Fall In Love With?

The events during The Empire Strikes Back seem to set up a love triangle. Does Leia love Luke or Han? Who does she end up with in the end?

Do Princess Leia and Luke Fall In Love?

It is clear that Leia loves Luke. Even Han Solo sees it. During Return of the Jedi, he gets angry at Leia’s seeming indecision on whether she wants to be with Luke or Han. She claims to love Han but also admits to loving Luke.

Luke and Leia are the same age, and despite coming from different backgrounds, they were both orphans, and both lost everyone they knew in a short period of time at the hands of the Empire. So this gives them something to bond over.

They share a few intimate moments, a kiss or two, several hugs, and laughter. Their bond even extends to the Force.

At the end of Return of the Jedi, after finding out that Leia loves Luke, Han agrees to back off out of respect for his friend. It is only then that Leia divulges that “it’s not like that at all; he’s my brother.”

But before she finds out for sure Luke is her brother, Leia already knew she loved him; she was just unsure what it meant. There is actually a term for this, Genetic Sexual Attraction.

Genetic Sexual Attraction is where estranged relatives meet for the first time and, out of a desire for bonding, develop strong, deep, and potentially romantic feelings for one another. In fact, many have described it as “feeling like ‘falling in love.’”

Considering this, it is very possible that Leia felt like she was falling in love with Luke, but once she found out they were siblings, she was able to recategorize that feeling into one of familial love.

Do Princess Leia and Han Solo Fall in Love?

Leia and Han’s initial relationship seems to be a begrudging tolerance. Leia finds Han annoying but admits that he “has his moments.” They then share a romantic kiss aboard the Millennium Falcon during The Empire Strikes Back, which is interrupted by C-3PO.

Leia sheepishly flees during the distraction, perhaps proving that Han was right about the feeling being mutual.

Han spends the entire movie trying to convince Leia to admit she has feelings for him. But, it isn’t until he faces potential death in the carbonite freezing chamber that she admits she loves him. 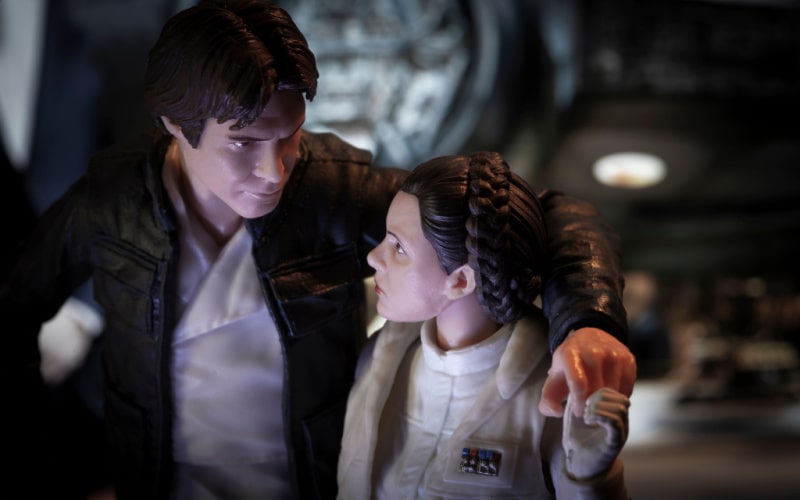 During much of Return of The Jedi, Han gets frustrated at Leia’s mixed signals. She went to the trouble of rescuing him but also clearly developed a deep affection for Luke while Han spent time as a wall ornament in Jabba’s palace.

Han doesn’t want to be a third wheel, so he says he understands when Leia admits she loves Luke and tells her, “I won’t get in the way.” He is shocked and relieved when she tells him that Luke is her brother.

Much later, during The Force Awakens, we find out that Han and Leia not only ended up together, they got married and had a son, Ben Solo.

Yes, Princess Leia and Luke are siblings, but that doesn’t mean they didn’t fall in love.

Upon meeting, they became quick friends and developed a deep connection that even extended into the Force. They did share a few onscreen kisses, but most were chaste, with one notable exception; Leia’s kiss to prove a point to Han.

When Luke and Leia later discover that they are twins, they can finally put a name to the connection and love they’ve felt for each other. And they can openly love one another as brother and sister in a very non-romantic way.