The Droid Army fought the Clone Army during the Clone Wars, a conflict that lasted between 22 BBY and 19 BBY. Both armies had their strengths and weaknesses, and they varied dramatically in size. You may therefore wonder which army is stronger, and who would win the war.

The Droid Army won in the numbers game, but the smaller Clone Army had Jedi commanders and its individuals were capable of taking out large numbers of droids. The droids were also weakened because of glitches, while most clones could not resist Order 66, which ended the Jedi Order.

What is the Droid Army? The Clone Wars pitted the Confederacy of Independent Systems, also called the Separatists, against the Galactic Republic. While the Clone Army fought for the Republic, the Droid Army served the Separatists.

The larger of the two armies, the droids had millions more in their ranks than the clones. They were originally B1 battle droids, and they made their first appearance in The Phantom Menace during the Battle of Naboo.

The Battle of Naboo [Star Wars: The Phantom Menace 1999] HD

However, B2’s came along at the beginning of the Clone Wars, and we even saw newer versions spring up.

Some of these droids included MagnaGuards, whose job was to protect high-ranking Separatists. You also saw droids serve as commanding units and tactical commanders. Following the Clone Wars, most of the droids were deactivated and melted.

A few droids survived the meltdown, only for Ezra Bridger, Rex, and Kanan Jarrus to discover their existence in Star Wars Rebels.

What is the Clone Army? 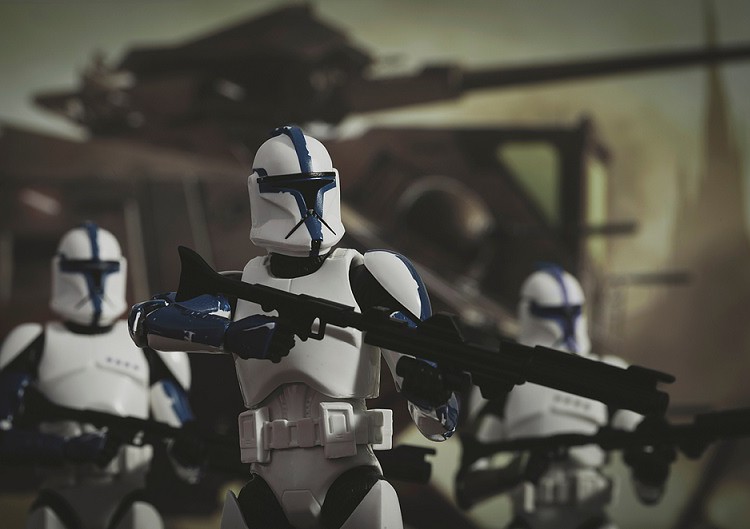 The Clone Army, also called the Grand Army of the Republic, comprised rapidly-aging clone troopers created on the planet Kamino. Obi-Wan Kenobi discovered them while he was busy searching for Padme Amidala’s assassin.

While the clones’ loyalty was with the Republic and they possessed independent minds, they were programmed to take orders without question. This occurred thanks to Dooku commissioning the clones after he paid the Pykes to kill off their original commissioner, Sifo-Dyas.

This programming was made possible because of a chip implanted into their brain. Among the orders was Order 66. This required the troopers to collectively assassinate the Jedi commanders assigned to them.

In 19 BBY during the events of Revenge of the Sith, Darth Sidious gave this order to the clone troopers following Anakin Skywalker’s fall to the dark side. After the Clone Wars, they became the first stormtroopers. But because of their fast aging, the Empire phased out the clones.

Some managed to fight against their implants and join the Rebellion. Others stuck around just long enough to train the next generation of stormtroopers. Also thanks to their quick aging, most clones were dead by 0 BBY and were extinct during the events of The Force Awakens.

Side by Side Comparisons: Breaking it Down

How Many in Each Army? 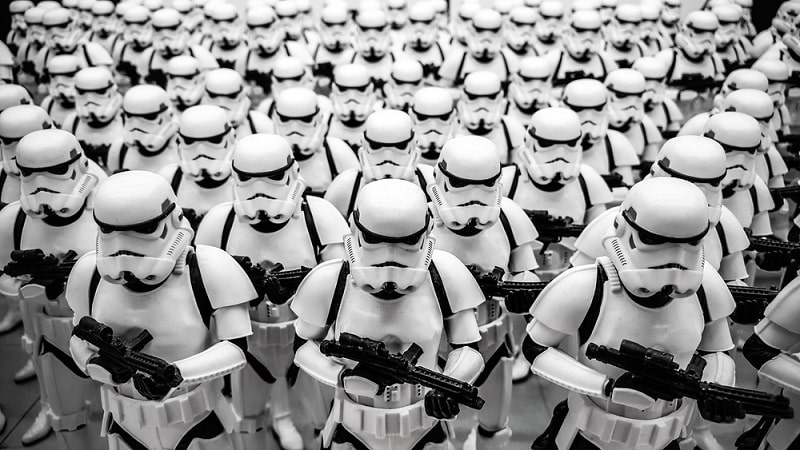 The number of clone troopers started off as a meager 200,000, which was the number Lama Su relayed to Obi-Wan Kenobi in Attack of the Clones. However, this is far too small of a number to take on the hundreds of millions in the Droid Army.

In the book Republic Commando, Karen Traviss stated the number reached 3 million. The number could have risen to an even greater number since the Clone Wars lasted between 22 BBY and 19 BBY, with 6 million serving as the absolute maximum.

The common consensus is that for every clone, there were 100 droids, so considering the 3 million to 6 million clones, we would see between 300 million and 600 million droids. Their large numbers, per Count Dooku, were intended to overwhelm both the clone troopers and the Jedi.

Who Were Their Commanders?

The Clone Wars was nothing more than a setup by Darth Sidious and Count Dooku as a plot to end the Jedi and bring about the Galactic Empire.

Since Order 66 was their endgame, Sidious, then known as Palpatine, commissioned the Jedi to command the clones. This gave Palpatine the framework for getting rid of the Jedi when the time called for it.

General Grievous commanded the Droid Army, and before becoming commander, he was a respected warlord on his home planet of Kalee. 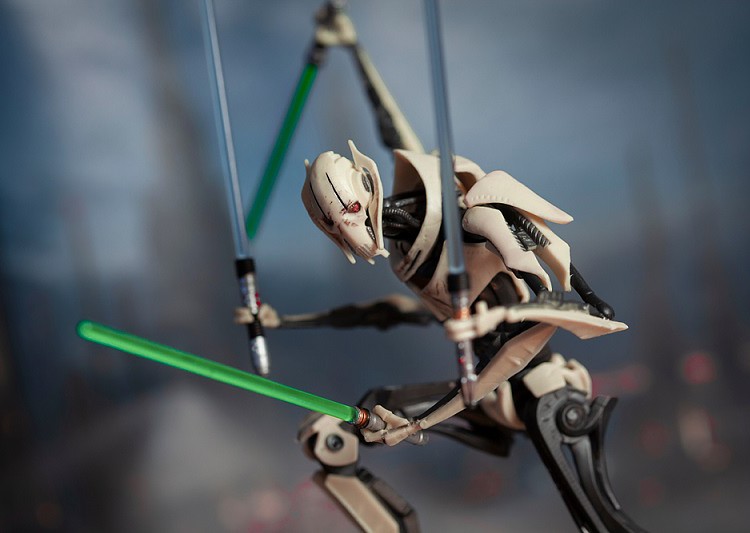 A cyborg when 22 BBY rolled around, Grievous initially caught the Sith’s attention during his conquests. They offered him cyberkinetics, which he accepted, but it still wasn’t good enough for the Sith.

Eventually, Count Dooku sent agents to destroy Grievous’ space shuttle and wound him to within an inch of his life. This forced Grievous to become fully cyborg and submissive to the Sith’s endgame.

What Were Their Strengths?

Numbers served as the greatest strength for the Droid Army. They were also soulless, with hardly an independent mind. Since they were 100% machine, centralized command centers were able to control them in large numbers. 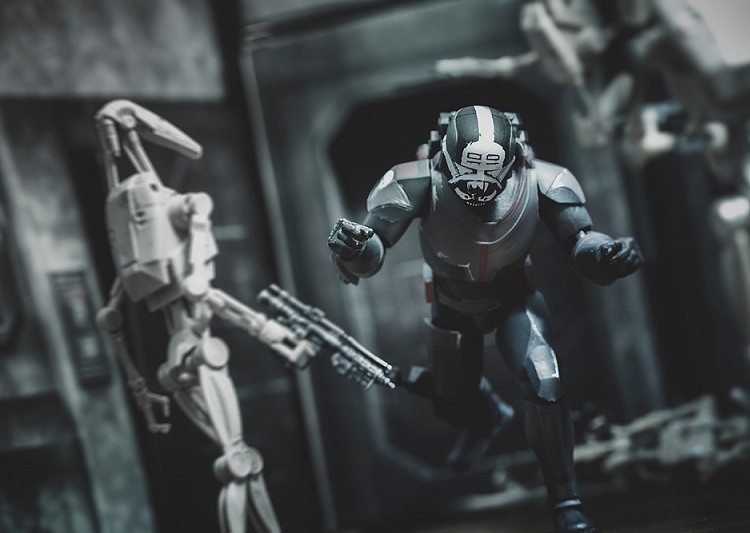 While the clones had smaller numbers, they were actual beings, which gave them stronger minds than their droid counterparts. This let them destroy dozens of droids within a short period, even if the droids were capable of overwhelming the clones and the Jedi.

Since the Jedi commanded the clones, they also had the benefit of fighting behind Force sensitives.

What Were Their Weaknesses?

Since they were 100% machine, the Droid Army could experience mass glitches in their programming. This could cause them to act out of line and make poor decisions when in battle. 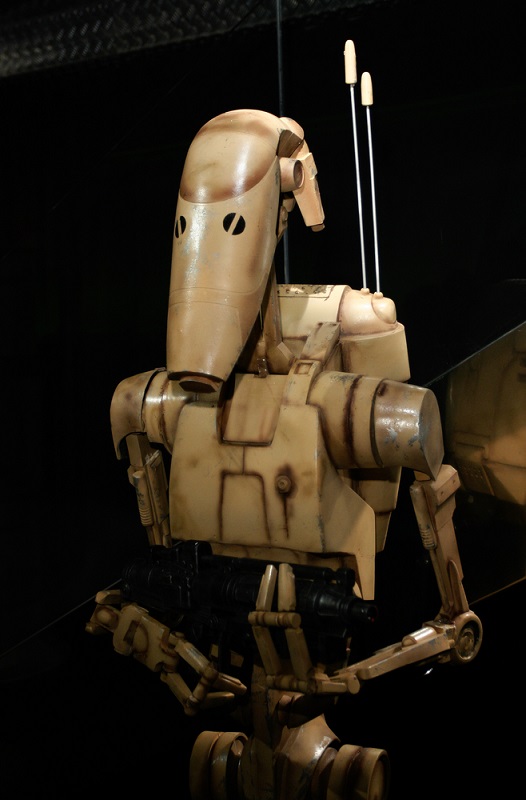 One major flaw in their programming is that the Geonosians did not design them to be smart, but submissive.

The goal for each battle droid unit was to overwhelm, which explains their large numbers. Given the droids’ limited minds, clone troopers and the Jedi could at times wipe them out in large numbers.

The clones’ biggest weakness is that they generally could not challenge an order. Or if they tried to, like Rex did in The Clone Wars, they eventually succumbed. This led to the clones’ transformation into stormtroopers in 19 BBY when they killed off their Jedi commanders. 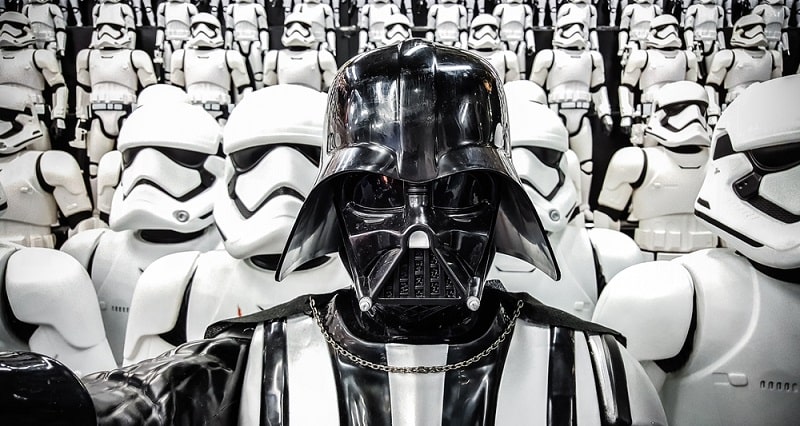 Droid Army vs. Clone Army: Who Was Stronger? 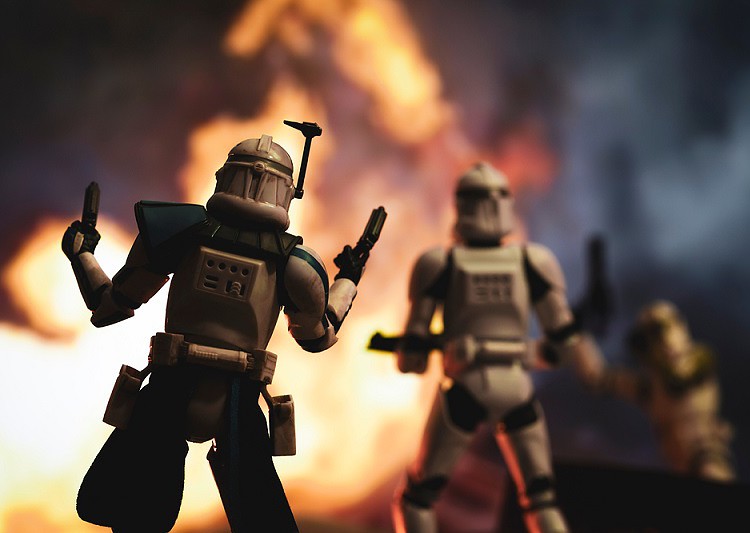 Although the droids had larger numbers, they were not always a strong match for the Jedi and clone troopers given their lack of intelligence. Their large numbers were only meant to overwhelm the clones and Jedi.

The clones started off with a pedestrian 200,000 troopers before their numbers jumped into the millions. Even with their smallest numbers, the Clone Army was able to hang with the droids throughout the Clone Wars, regardless of the latter’s numbers.

In the end, the Droid Army technically lost, since Obi-Wan Kenobi killed General Grievous, the Republic won the Battle of Coruscant, and Anakin Skywalker/Darth Vader killed Count Dooku plus the Separatist leaders.

Further, the Clone Army comprised Darth Sidious’ and the Empire’s first stormtroopers while he deactivated the Droid Army. Had Sidious believed the Droid Army was the stronger of the two, he would have discarded the clones and kept the droids.

The Droid Army’s strength rested in its numbers, but they were unable to perpetually overwhelm the Clone Army. Meanwhile, the Clone Army had the Jedi on their side and possessed a more strategic edge. The Clone Army also didn’t experience numerous glitches like the Droid Army.

While they were both designed to be submissive and carry out orders without question, the Clone Army had more independent minds. Some, like Captain Rex, attempted to throw off Order 66 and even lived long enough to fight in the Galactic Civil War.