Since 1977, the Empire has been a definitive aspect of Star Wars. Thanks to the Andor television show, the Empire continues to captivate audiences in 2022.

The First Order sprang from the Empire and starred in the three Star Wars sequel movies. This new and improved Empire 2.0 sought to reclaim the galaxy with a focus on military order.

If we matched up the Empire versus the First Order, who would prevail? By taking in a range of factors–from how long each lasted to ships and superweapons–the Empire seems to win out.

Duration of the Empire and the First Order

The Empire rose out of the Galactic Republic, or more accurately, defeated the Republic in the Clone Wars, in 19 BBY (Before the Battle of Yavin). It was marked by Chancellor Palpatine’s purge of the Jedi and crowning himself as the Emperor.

Although the Empire was devastated after their defeat in 4 ABY during the Battle of Endor, it technically lasted until 138 ABY, or 157 years, according to events depicted in what is considered Legends.

If we include this timeline, the Empire vastly outlasted the First Order. If we take only the Canon timeline, we could say the Empire lasted about 23 years.

The First Order rose in the Unknown Regions where former officers of the Empire secretly built armies and ships to take power back from the New Republic. 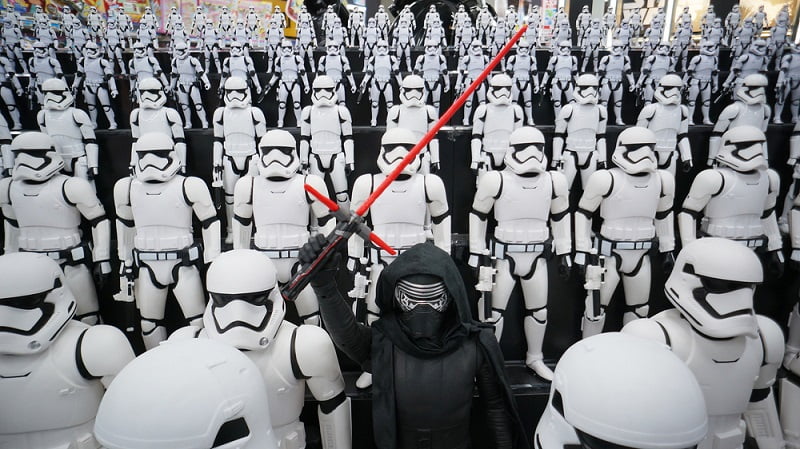 It took about 30 years for the First Order to form–that’s the time between Return of the Jedi and The Force Awakens.

Both the first and second movies of the trilogy take place in 34 ABY. Episode IX: The Rise of Skywalker occurs in the following year, 35 ABY.

Hence, the rise and fall of the First Order according to the movies is quite brief, only about one year.

Yet, the timeline of the book Bloodline has The First Order established about six years before The Force Awakens. So, we could estimate that it lasted around seven years.

By measure of how long the Empire and First Order lasted, the Empire wins out.

Darth Sidious, disguised as Palpatine, did the initial planning of the Empire going back to 32 BBY. He represented the power of the Sith and the Empire. 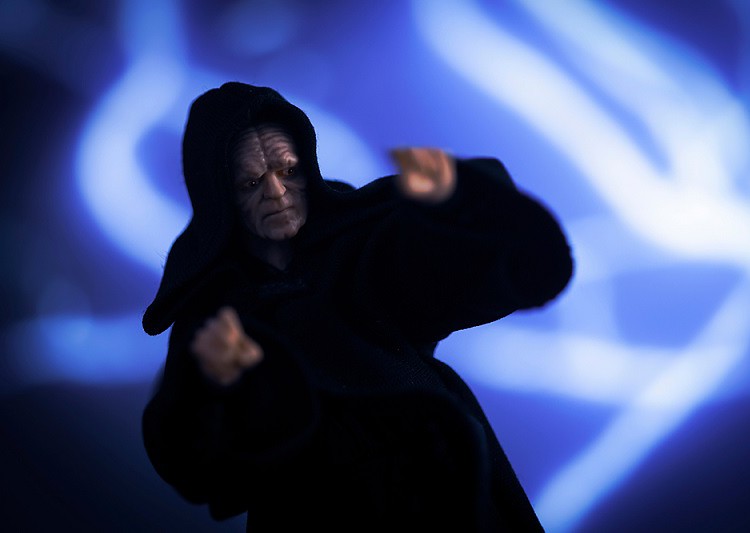 Sidious was a definitive figure of the Empire who overthrew both the Republic and the Jedi, which testifies to his strength and what he provided to the Empire.

The Emperor commanded control over the Star Wars galaxy, built the most formidable military yet known to this galaxy, and ruled largely without opposition for nearly twenty years–until the Battle of Yavin in A New Hope.

Darth Sidious had the power to use the Force and Force lightning to inflict damage on his opponents. The Dark Side of the Force was strong with him, and he largely defined the Empire.

The power of the Empire resided with the Emperor and Darth Vader. Both were only challenged by the rise of Luke Skywalker and the effectiveness of the Rebellion.

Although the Emperor, in the form of a cloned body, was behind the rise of the First Order, the main figurehead was Supreme Leader Snoke. 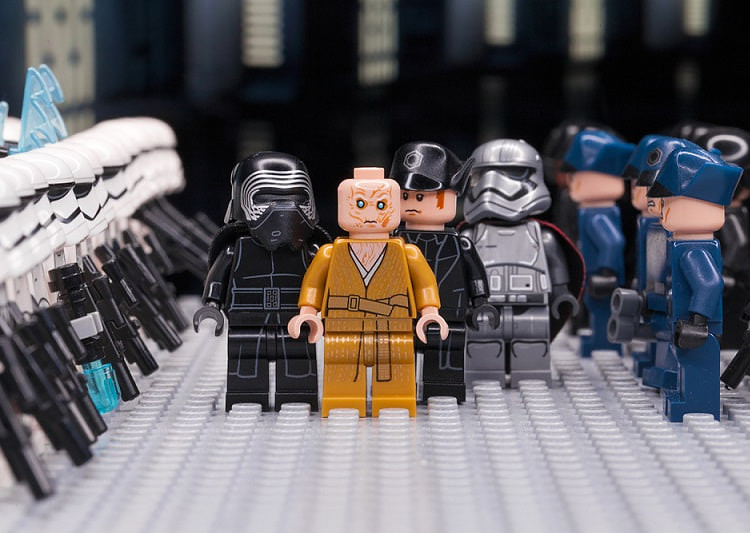 Snoke hailed from the Sith planet of Exegol. He was a Force-sensitive being who was entrusted with carrying out the plans to revive the Empire.

Snoke eventually took control of the First Order and became its powerful leader. Snoke also used Force Lightning as a sign of his power and that of The First Order.

However, Snoke does not measure up to the power of the Emperor. Darth Sidious ultimately controlled Snoke from behind the scenes.

Perhaps nobody defines the Empire better than Darth Vader. Although the Emperor out-ranked him and embodied the power of the Empire, Vader literally announced the Empire with his presence.

From his famous entrance in A New Hope to his final demise with his son Luke Skywalker, Vader helped define the Empire’s presence.

Fans tend to see Vader as a better leader with well-calculated plans compared with Kylo Ren.

If we matched up Vader versus Ren in a duel, Vader likewise seems to get the edge. One of the main reasons is that Vader completed his Jedi training whereas Kylo did not.

Yet, Kylo Ren does not need a protective suit to keep him alive. Darth Vader does. This does give a point of strength to Kylo. Kylo is also younger and fueled by anger, which could help him surpass Vader’s fighting ability.

So, this is a tough call, and probably a draw. Yet, in terms of iconic presence, Vader still prevails.

Breaking with the Past and Bureaucracy

The First Order has been credited with breaking with the past. It sought to leave behind outdated thinking and a bureaucratic past to become its own unique power. With a focus on a Supreme Leader, the First Order also stressed the military. 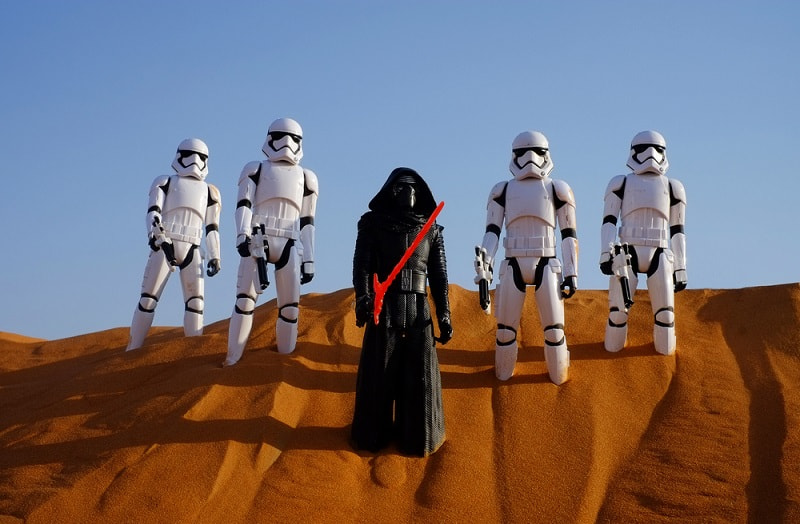 In comparison, the Empire was riddled with bureaucracy, as depicted in the latest series Andor. For example, this program depicts the inner workings of the Imperial Security Bureau, the jostlings of middle management, and multiple bureaucrat figures.

The First Order stepped away from these red-tape trappings and focused on a military order bent with a line of power that makes immediate decisions–such as Kylo Ren’s pursuit of Rey.

Yet, as we have seen with Kylo Ren, the First Order modeled itself on the Empire’s power and idolized Darth Vader. Further, Emperor Palpatine orchestrated the First Order’s plans from behind the scenes.

The Empire did rule, or attempt to rule, the entire Star Wars galaxy. The First Order could only attempt to control a smaller portion of it.

In governance, then, we detect the Empire winning out.

The Empire had an incredibly large navy that included 25,000 Star Destroyers and a range of ships, including TIE fighters, Lambda-class Imperial Shuttles, and Light Cruisers.

As depicted in Andor, the Empire also had unique vessels such as the Cantwell-class Arrestor Cruiser with three tractor beam dishes.

Further, the Empire’s navy contained impressive vessels such as Darth Vader’s Executor Dreadnought. At 19,000 meters long, its commanding presence announced the power of the Empire.

So quantity and range defined the Empire’s fleets of ships.

The First Order’s navy was small in comparison, with some fans estimating perhaps five percent of the Empire’s fleet. The First Order did not have the resources to build an expansive navy but instead focused on improving ships.

The First Order also had incredible ships like the Fulminatrix, a Mandator IV-class Siege Dreadnought that destroyed the Resistance base in Episode VIII: The Last Jedi.

So, in terms of advanced ships, the First Order may take first place. But, it certainly did not have the extent of ships of the Empire.

Death Stars and Starkiller Base

With Death Star 1, the Empire had an awesome superweapon. At the size of about 120 kilometers, it was a mobile battle station capable of destroying a planet, like Alderaan.

Death Star 2 improved on this design and had a superweapon that could blast away Rebel ships. The Empire thus had two impressive battle stations.

Yet, the First Order took a step further with its Starkiller Base. This planet-installed superweapon could destroy multiple planets at once. And it did: in the Hosnian Cataclysm, this weapon wiped out five planets.

Hence, the First Order’s superweapon was more destructive and a clear sign of technological advancement.

The First Order does reflect improvements, including its use of stormtroopers which reflects an emphasis on quality over quantity. And, its ships and superweapons provide superior alternatives to the Empire.

Yet, in terms of longevity, leadership, and government, the Empire still wins out over the First Order.

We just need to think of the alarming presence of Darth Vader in his prime to remember the power of the Empire.