Cad Bane was a red-eyed, blue-skinned bounty hunter introduced in Star Wars: The Clone Wars. Later, his character also appeared in The Bad Batch. Trained by Jango Fett and a mentor to Boba Fett, he was considered to be one of the best bounty hunters in the galaxy.

Because his story was never completed in The Clone Wars or The Bad Batch, many fans have wondered: what happened to him? How did he die?

Cad Bane died while dueling his former mentee, Boba Fett, in the streets of Mos Espa on Tatooine. However, Star Wars fans have a lot of questions surrounding his death and whether or not he was really killed.

How Does Cad Bane Die in Canon? 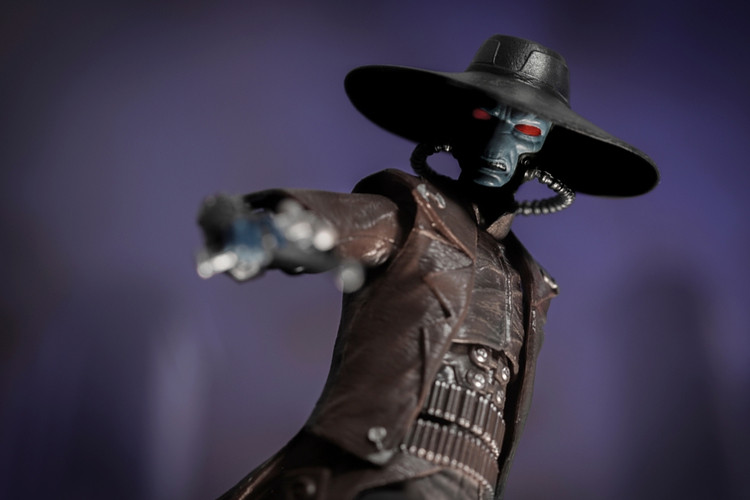 Cad Bane made a number of appearances throughout seven seasons of The Clone Wars, and he also played a major role in the first season of The Bad Batch.

However, the character really turned heads with his surprise appearance in The Book of Boba Fett–Bane’s first live-action portrayal.

Though he only appears in the last two episodes of the show’s first season, his role in The Book of Boba Fett left a strong impression with fans.

He initially showed up as the leader of the Pyke Syndicate, enemies of Boba Fett. He and Fett met twice during the final episode.

In the first meeting, Bane attempted to goad Fett into a duel, and he almost gave in before his ally, Fennec Shand, convinced him that this was not the time or the place.

At the end of the episode, a calmer Fett faced off against Bane once more. Bane initially used his quick draw and shooting skills to control the battle, but Fett then used his spear to knock Bane to the ground.

Bane’s final words were, “I knew you were a killer.” The next moment, Fett proved him right by plunging the spear into Bane’s chest.

'I KNEW YOU WERE A KILLER' BOBA FETT KILLS CAD BANE, THE BOOK OF BOBA FETT EPISODE 7 SPOILER

It seems fitting that Cad Bane would die at the hands of his former mentee-turned-rival. What’s more, he was quite old for his species at the time of his fateful duel with Boba Fett.

The climactic conclusion to The Book of Boba Fett gives us every reason to believe that Bane is, in fact, dead.

But many fans aren’t so sure.

Star Wars is known for apparently killing off characters only to bring them back later. Many of these characters suffered far greater fates than having a crude homemade spear plunged into their chest.

Darth Maul, for example, was sliced in half by a lightsaber in Star Wars Episode I: The Phantom Menace, only to return later and play a prominent role in The Clone Wars and Star Wars Rebels.

Emperor Palpatine was thrown down an energy shaft, supposedly to his death, in Episode VI: Return of the Jedi. In the sequel trilogy, however, it was revealed that he survived and spent many years rebuilding the Sith Order in secret.

Even Boba Fett, who apparently died in the Sarlacc pit in Return of the Jedi, was revealed to have survived when he made his reappearance in The Mandalorian. Later, he even got his own Disney Plus series.

With all of these examples, it’s easy to see why fans aren’t so sure Cad Bane is really dead.

Does Cad Bane Come Back After He Dies?

As far as we know right now, Cad Bane is dead. It is unclear whether he will make a comeback in future seasons of The Book of Boba Fett or The Mandalorian, but such a comeback is certainly possible and would not be surprising.

It is possible that he could survive the injuries he sustained by healing in a Bacta Tank or receiving other specialized medical treatment. The Star Wars universe appears to have the technology to keep anyone alive if they are rich or valuable enough.

Cad Bane, of course, is both rich and valuable.

Everything You Need to Know About Cad Bane

That said, we can only speculate whether or not Bane survived and will reappear in future Star Wars stories. Time will tell, but as of right now, we simply don’t know.

How Does Cad Bane Die in the Comics?

However, these comics are not considered part of the official Star Wars history, and as such, they were relegated to Star Wars Legends (formerly known as the Expanded Universe).

In the comics, Bane is portrayed much the same as he is in his various on-screen appearances. He is considered one of the best bounty hunters in the galaxy, only takes on the highest-paying jobs, and repeatedly works for Emperor Palpatine himself.

There is one major difference between these comics and Star Wars Canon: Bane does not die in the comics.

Everything that has been published under Legends points to the fact that Bane was a feared bounty hunter, but these comic books don’t provide a conclusion to his story.

According to Legends, all we know about Bane is that he was still alive as of 18 BBY and that he was working for the Emperor at that time.

The fearsome bounty hunter Cad Bane made his live-action debut in Episode 6 of The Book of Boba Fett. By the following episode, however, he dueled and was apparently killed by Boba Fett.

It remains to be seen whether he was actually killed or if the makers of future Star Wars stories will bring his character back from the dead in the future.