Ezra Bridger was introduced in the animated TV show Star Wars Rebels, which ran for four seasons from 2014 to 2018. He made his debut as a Force-sensitive orphan who joined the crew of the Ghost, a ship operating under the rebel cell known as the Spectres.

Ezra learned a lot and grew significantly throughout the show’s runtime. This has prompted many fans to wonder: How old was he throughout Rebels? Did he survive beyond the events of the show? How old is he in relation to Luke Skywalker?

Ezra is nearly the same age as Luke Skywalker, as they were born a couple of days apart in the year 19 BBY.

How Old is Ezra Bridger Compared to Luke Skywalker? 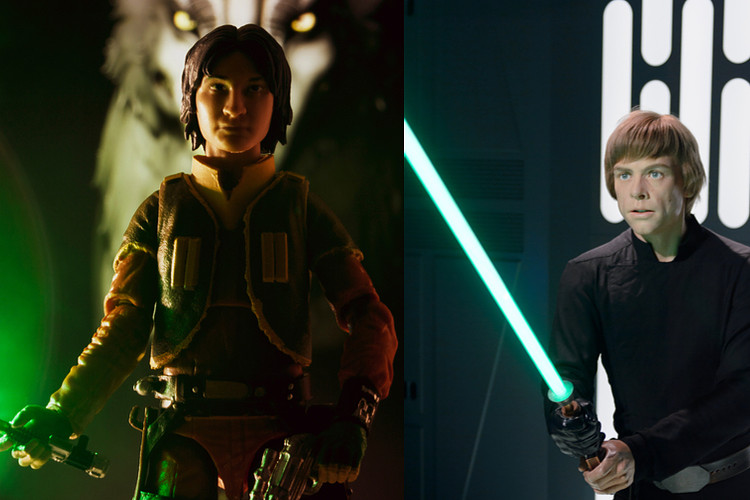 Ezra Bridger was born in 19 BBY on what became known as Empire Day. This was the day when Supreme Chancellor Palpatine declared himself Emperor of the galaxy, dissolving the Republic and ushering in the Imperial Age.

Two days later, following the events of Order 66 and Darth Vader’s rampage on the planet Mustafar, Luke Skywalker and his twin sister, Leia, were born. As Vader’s children, they were separated and hidden to protect them from the dark side.

Both Ezra and Luke grew up as orphans. Ezra’s parents were arrested for speaking out against the Empire when Ezra was a child; he later learned they had been killed in an attempt to escape prison.

Meanwhile, Luke’s mother died shortly after his birth, and he was led to believe his father had died at the hands of Darth Vader.

Interestingly, both Ezra and Luke were Force-sensitive orphans who fought against the Empire and its tyranny.

How Old is Ezra Bridger in Star Wars Rebels?

Ezra grew up on the planet Lothal, where he spent much of his time conning and stealing to survive. A chance meeting with the freedom-fighting Ghost crew led to his joining their resistance efforts and being trained in the ways of the Force by Jedi Kanan Jarrus.

This happened at the beginning of the show, during the year 5 BBY (before the Battle of Yavin). At this time, Ezra was 14 years old.

The show continued for four seasons, with each season covering about a year of time (perhaps a little more–it begins in 5 BBY and ends in 1 BBY.

In the series finale, Ezra surrendered to Grand Admiral Thrawn and met him aboard his ship, the Chimaera. In the skies above Lothal, he faced off against Thrawn and Emperor Palpatine, allowing his comrades to take control of the battle on the ground.

As part of Ezra’s plan, a pod of purrgil joined the fight, wiping out many of Thrawn’s fleet before taking hold of the Chimaera. The purrgil then jumped to hyperspace, taking the ship along with them.

This was the last time Ezra was seen. In the epilogue to the show, Ezra’s comrades Sabine Wren and Ahsoka Tano set off to find Ezra after the destruction of the Second Death Star, believing he was still alive.

At this time, Ezra’s fate remains unknown, though there is reason to believe that he did survive his disappearance and will be returning in future Star Wars shows.

Specifically, actor Eman Esfandi has been cast as Ezra Bridger in the upcoming show Ahsoka. Though it’s uncertain what his role in the show will be, it seems likely that Ahsoka and Sabine will finally be successful in their search for Ezra and that they will find him alive.

That said, only time will tell. Though it seems unlikely, it is also possible that Ezra will only appear in flashbacks and memories throughout the show.

How Old is Ezra Bridger in The Rise of Skywalker?

It is currently unknown whether Ezra was still alive at the time of Star Wars Episode IX: The Rise of Skywalker.

On the one hand, Rey Skywalker is thought to be the last remaining Jedi at this point in Star Wars history, so there’s a good chance that Ezra was either dead or still missing.

On the other hand, this has not been confirmed, and Star Wars is notorious for bringing back characters that were thought to be dead. So there seems to be a very good possibility that Ezra was still alive during the events of The Rise of Skywalker.

Regardless, Ezra was born in 19 BBY, and The Rise of Skywalker took place in 35 ABY (after the Battle of Yavin). This means that, if he was still alive, he would have been about 54 years old during the movie.

How Powerful is Ezra Bridger?

Ezra is thought to be a fairly powerful Jedi, but he is far from being the most powerful.

Throughout Rebels, he becomes one of the only Jedi to master all of the different lightsaber combat forms. What’s more, he’s the only Jedi to have found his way to the World Between Worlds.

He was also able to see through Emperor Palpatine’s trickery in the Rebels series finale and defeated several of the Emperor’s personal guards.

In terms of Force abilities, though, Ezra is not nearly as powerful as Jedi such as Yoda, Luke Skywalker, and Obi-Wan Kenobi. His main strengths seem to lie not in his Force sensitivity but in his combat skills and leadership abilities.

If he was still alive at the time of The Rise of Skywalker, he would have been about 54 years old.