Ahsoka Tano is one of the most beloved characters in the Star Wars universe. Though she started as a cocky, reckless Jedi padawan, she grew and changed significantly over the course of her Star Wars appearances.

This has led many fans to wonder about her age at various points in her story. Specifically, how old was she during The Clone Wars?

The TV series The Clone Wars takes place between the years 22 and 19 BBY. Ahsoka was born in 36 BBY. This means that she was 14 years old at the beginning of The Clone Wars and 17 by the end of the series.

How Old is Ahsoka in The Clone Wars Seasons 1 Through 6? 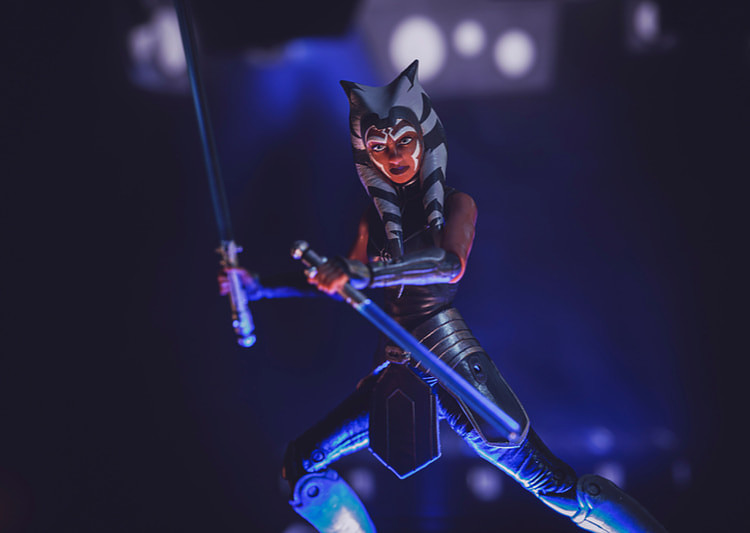 Ahsoka Tano was the padawan of Anakin Skywalker throughout the animated TV series The Clone Wars. As such, she was a major supporting character throughout the series and quickly became a fan favorite.

Though not a human character, it was easy to see in her behavior and hear in her voice that Ahsoka was quite young at the beginning of The Clone Wars. When she was first assigned to be Anakin’s padawan, she was just 14 years old.

The first six seasons of the show covered the majority of the Clone Wars, which took place over a three year period of time–from 22 to 19 BBY (before the Battle of Yavin).

Throughout this three year time period, Ahsoka fought beside Anakin in many battles and the pair became close friends–almost like brother and sister. They both grew and matured significantly through their experiences.

Near the end of the Clone Wars, during season 6 of the show, Ahsoka was wrongly accused of bombing the Jedi Temple. Anakin was the only one who believed she was innocent. He fought to find the true bomber and clear Ahsoka’s name.

Though she was eventually acquitted of the charges, the experience caused her to lose all faith in the Jedi, and she walked away from the Order. She was 17 years old at this time.

All of these events led up to the climactic final season of The Clone Wars.

How Old is Ahsoka in The Clone Wars Season 7?

Season 7 picked up where season 6 left off, in the year 19 BBY, shortly before the events of Star Wars Episode III: Revenge of the Sith.

As the Clone Wars raged on, Ahsoka attempted to keep a low profile in the lower levels of Coruscant. She couldn’t stay out of the fight for long, however; she soon teamed up with Mandalorian Bo-Katan Kryze in an effort to free Mandalore from the rule of Darth Maul.

She meets with Anakin a final time as she and Bo-Katan approach the Republic for help in freeing Mandalore. Though unable to offer much support as the Clone Wars draw to a close, Anakin divides his own division of clones and sends some of them with Ahsoka.

A few days later, after Ahsoka had successfully captured Maul, Order 66 was issued and her clone soldiers turned against her.

Though she and clone Commander Rex were able to survive and escape the ensuing chaos, Ahsoka had no idea, at that time, that her friend and former Master, Anakin Skywalker, had fallen to the dark side and become Darth Vader.

All of these events happened over a very short period of time during the year 19 BBY, when Ahsoka was 17 years old.

How Old is Ahsoka in Star Wars Rebels?

In the aftermath of Order 66, Ahsoka once again found it necessary to keep a low profile as Darth Vader and his Inquisitors attempted to hunt down all remaining Jedi in the galaxy.

But, once again, she couldn’t stay out of the action for long. Though she continued to stay undercover, she began working with Bail Organa in his efforts to resist the Galactic Empire; specifically, Ahsoka gathered and provided intelligence to various resistance groups.

Finally, at the end of Star Wars Rebels season 1, she is revealed as the operative known by the codename Fulcrum. This is approximately four years before the Battle of Yavin, making her 32 years old in her Rebels debut.

She continued to make appearances throughout the show, fighting in various battles and eventually facing off against Darth Vader. She had begun to suspect his true identity, but this was not confirmed for her until this battle.

Though she would have been presumably killed in this meeting with her old master, a future version of Jedi Ezra Bridger was able to pull her into a different time, saving her life.

Later, after the Rebel Alliance defeated the Empire, Ahsoka and her friend, the Mandalorian Sabine Wren, decided to go in search of Ezra, who had gone missing years before. This is where Star Wars Rebels ended; Ahsoka was 41 years old at that time.

How Old is Ahsoka in The Mandalorian and The Book of Boba Fett?

The Mandalorian and The Book of Boba Fett both picked up a few years after the Epilogue of Star Wars Rebels, in the year 9 ABY (five years after the Empire was defeated). Though not a major character in either show (so far), Ahsoka has made appearances in both.

Ahsoka Tano ALL SCENES | The Book Of Boba Fett Episode 6

In The Mandalorian, she declined to train the Force-sensitive child Grogu as a Jedi, noting his strong bond with Mandalorian Din Djarin. Later, as Luke Skywalker trained Grogu, Ahsoka unsuccessfully attempted to discourage Djarin from visiting Grogu and encouraging the bond.

After speaking briefly with Luke, she left, though it was unclear where she was planning to go. All of these events happened around the year 9 ABY, when Ahsoka was about 45 years old.

How Old is Ahsoka in The Rise of Skywalker?

In Star Wars Episode IX: The Rise of Skywalker, Ahsoka’s voice was among those of many past Jedi who spoke to Rey, encouraging her in her climactic battle with Darth Sidious.

It seems reasonable to believe that Ahsoka was dead by this time, since all other voices heard were those of deceased Jedi. However, The Clone Wars director Dave Filoni shared a drawing that strongly hinted she was still alive.

Ahsoka’s storyline takes place over many years, beginning when she is a young teenager and presumably continuing until she was in her 70s.

During that time, she played major roles first as a Jedi padawan during the Clone Wars, then later as a resistance fighter and member of the Rebel Alliance.

Though her later years remain shrouded in the unknown, it is clear that she maintained a connection with the Force and did whatever she could to fight for freedom.

Who is Ahsoka Tano - Her Complete Story (So Far)
Click here to cancel reply.