Baby Yoda, also known as Grogu, adds mystery to the mysterious species he, Yoda, and Yaddle belong to. Grogu was born in 41 BBY, but when The Mandalorian kicked off a half-decade after Return of the Jedi, the mysterious being was still a young child.

We don’t know whether Grogu is Yoda’s child, but evidence exists that he could be. We only know Grogu was born to two beings in Yoda’s species 50 years before The Mandalorian premiered. Grogu is not mature and won’t be an adult until around age 100.

While Yaddle’s storyline is different in Star Wars Legends, her fate remains unknown in Star Wars Canon, which is where The Mandalorian resides. Yaddle’s departure would allow Yoda to remain on the Council and to keep an active role in Jedi affairs.

But if the Jedi Code forbade relationships, how could Grogu have become Yoda and Yaddle’s child?

A loophole existed in the Jedi Order, where beings could reproduce if it meant keeping their species alive. This occurred with Ki-Adi-Mundi, who was a Cerean. Since his species was endangered, the Jedi Order let him have seven kids with four wives.

While we are unsure whether Yoda’s species was also endangered, we only saw a small number of them during the Skywalker Saga. This implies the species was rarer than others in the galaxy, paving the way for Yoda and Yaddle to reproduce.

Both Yoda and Yaddle were also strong in the Force, and Grogu is no different, having levitated mudhorns and even resorting to Force chokes to protect his caretaker, Din Djarin.

While it’s possible Yoda’s species was naturally sensitive in the Force if their midi-chlorian count was high enough, Grogu’s power further indicated he was Yoda’s offspring. No one was a stronger Jedi in Yoda’s time, and it makes sense he passed the trait to Grogu.

How Did Baby Yoda Get Born?

We know little of Yoda’s species and their biology. Yoda’s species has no name, no real backstory in Canon or Legends, nor has Star Wars creator George Lucas given us much to work with.

Grogu only adds to the mystery regarding Yoda’s species. While he was raised in the Jedi Temple on Coruscant, was he born there or on his mysterious homeworld?

If he was born in the Jedi Temple, it’s possible Yoda and Yaddle, or one of the few Force-sensitives of the species are the parents.

Or, if he was born on the species’ home planet, the Jedi recruiters took him shortly following his birth.

We will likely discover more about Grogu’s birth as The Mandalorian steamrolls into its third season later in 2022. Until then, theories will continue to swirl regarding Grogu, his ancestry, and birthplace.

How Old is Baby Yoda?

Grogu was born in 41 BBY and raised in the Jedi Temple. During the Siege of the Jedi Temple, Grogu hid and witnessed the 501st Legion and Darth Vader kill his brethren before Yoda and Obi-Wan Kenobi temporarily retook the temple.

Someone took Grogu and he remained hidden from 19 BBY until the Galactic Empire collapsed in 4 ABY. Grogu’s memory grew dark, as Ahsoka Tano pointed out in 9 ABY when she spoke to him through the Force in The Mandalorian.

Since The Mandalorian premiered in 9 ABY, Grogu is currently 50 years old.

Yoda’s species aged slowly, with Yoda living to be 900 when he died in 4 ABY. Yaddle was also 477 in The Phantom Menace. Grogu is 50 and is, at most, a toddler, though many sources refer to him as an infant.

Grogu is also not biologically mature, standing between 0.33 and 0.42 meters. By contrast, Yaddle stood at 0.61 meters and Yoda, 0.66, meaning Grogu is at least half their height.

Yaddle and Yoda were both well-versed in wielding the Force. Something Grogu has shown, However, he is not mature enough to know his true capabilities.

After he levitated a mudhorn, he passed out from the strain. Like Yoda, Grogu also engaged in Force healing, which further resulted in him fainting after he used the technique.

At What Age Will Grogu be Considered an Adult?

Yoda holds the key that indicates when Grogu will reach adulthood. In The Empire Strikes Back, the former Jedi Master told Luke Skywalker he trained Jedi for over 800 years.

The movie took place in 3 ABY, putting Yoda at 899 years old. This indicates Yoda became either a Jedi Knight or Master before he reached 100.

Yoda’s remarks further indicated the species matures rapidly between Grogu’s age (50), and when Yoda reached Knighthood (before 796 BBY). Yoda would have also served as a Padawan before then, which would have placed him in adolescence at around 806 BBY, at age 90. 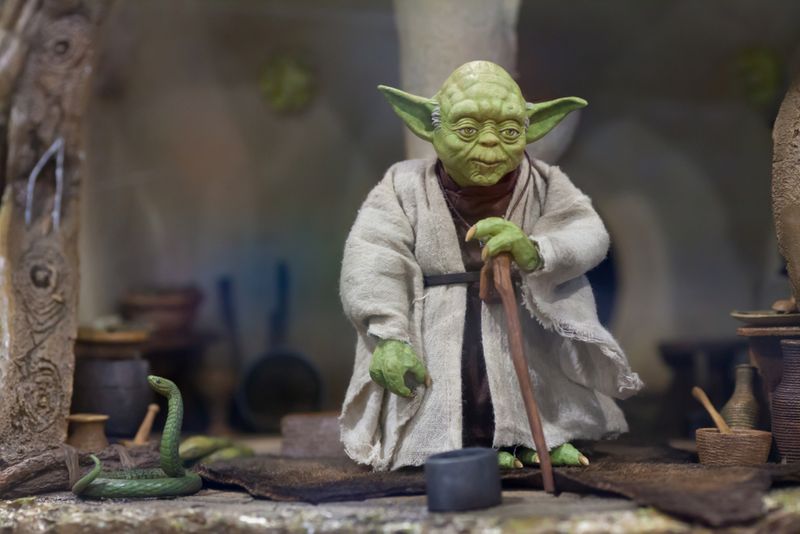 Using the information Yoda gave us in The Empire Strikes Back, we can project Grogu will become an adolescent sometime around age 90 in 49 ABY. He will reach full maturity roughly ten years afterward, around 59 ABY.

Since we know little about Yoda’s species, it’s also possible that they don’t all age the same way. Just as people mature at different stages. Therefore, it’s possible Grogu may take longer to mature than Yoda. Or, he may wind up maturing faster.

Grogu is 50 years old during The Mandalorian’s first season in 9 ABY. We don’t know whether Grogu is Yoda’s child, but if the mysterious species faces extinction, it’s possible Yoda had no choice but to reproduce.

If Yoda was not Grogu’s father, it’s possible Jedi recruiters collected the child shortly after his birth.

Even at 50, Grogu is not yet mature. Given Yoda’s testament in The Empire Strikes Back, it’s likely Grogu won’t fully mature until he reaches age 100.