As a new character in the Star Wars franchise, Din Djarin appears as a battle-hardened, experienced bounty hunter who takes on the task of protecting Grogu.

He is enclosed in Mandalorian armor and wears a T-shaped helmet that conceals his face. Like other Mandalorians, Din Djarin is equipped with a whipcord thrower, flamethrower, and jetpack.

Since his face is concealed until the end of Season 1, it is difficult to know the Mandalorians’ age. How old is Din Djarin?

Based on the Star Wars timeline, The Mandalorian, and The Book of Boba Fett, he is slightly older than previous starring characters like Luke Skywalker. Yet, Din Djarin is still young enough to battle quite effectively.

Din Djarin and The Mandalorian 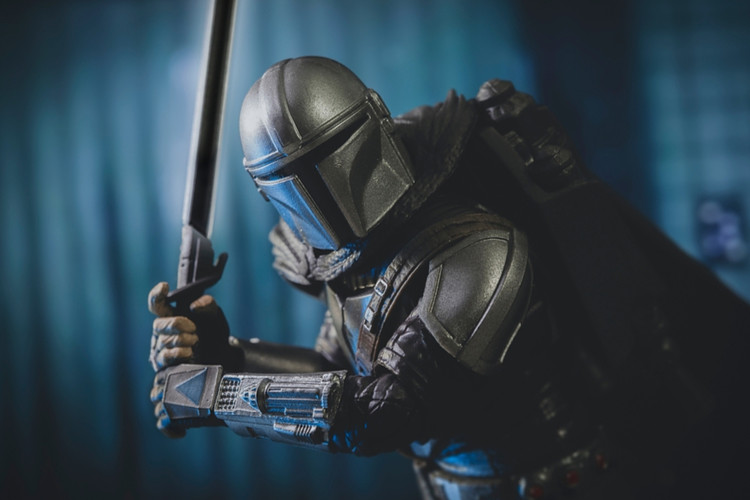 When The Mandalorian television show came out in 2019, fans responded positively to the main character Din Djarin. We appreciated his tough persona that seemed like a blend between Jango and Boba Fett.

Although we do not see Din Djarin’s face until the end of Season 1, we assume he has some years under his belt. How many years can be determined by following the Star Wars timeline.

So, Din Djarin was alive during the original trilogy and even earlier.

It is estimated that Din Djarin was born in 30 BBY, or 30 years before the Battle of Yavin. Given that timeline, he should be about 40 in The Mandalorian and around 35 years old during Return of the Jedi.

This estimate corresponds with Wookieepedia, which indicates that Din Djarin was born before 19 BBY. And, when we do see Din Djarin’s face in Season 1, Episode 8, he appears to be in his early 40s.

EVERY TIME THE MANDALORIAN SHOWS HIS FACE *SPOILERS*

Viewers were touched by this revealing scene. As one article described, Din Djarin appearing as a “bloody, middle-aged man dying on the ground” was “genuinely heartbreaking.”

In all, we can say that Din Djarin is at least in his late 30s, but probably in his early 40s during The Mandalorian.

How Old Is Din Djarin in The Book of Boba Fett?

Din Djarin returns in three episodes of The Book of Boba Fett. In Episode 7, he intersects with Boba Fett and Fennec Shand. The Mandalorian and Grogu intervene in a gang war and help stop the Pyke Syndicate. At the end of the episode, Grogu flies off with Din Djarin.

We may wonder when all this occurs.

The Book of Boba Fett technically begins right after the season 2 finale of The Mandalorian. This is the episode where Din Djarin fights a Dark Trooper and Moff Gideon, reclaims the Darksaber, and turns Grogu over to Luke Skywalker.

However, the timeline is the same for both shows, 9 ABY, or nine years after the Battle of Yavin. So, Din Djarin is still around 40 years old.

Since Din Djarin appears in later episodes of The Book of Boba Fett, he may have aged a year or so, but he would still be in his early 40s.

The time difference between these shows is small, but both of these shows occur about 25 years before The Force Awakens timeline in 34 ABY. So, Din Djarin would be in his 60s by the time of the sequel movies.

In comparison, Din Djarin was a young boy during the prequels.

How Old Is Din Djarin During the Clone Wars?

Flashback scenes from season 1 of The Mandalorian tell us that Din Djarin was a young child during the Clone Wars. Fan commentary about these scenes indicates that the Mandalorian is 5 to 10 years old.

The Clone Wars went from 22 BBY to 19 BBY (Before the Battle of Yavin). These wars included such events as the First and Second Battles of Geonosis, the attack on the Jedi Temple, and Order 66.

The Clone Wars ended in 19 BBY. Since Din Djarin was born sometime before 19 BBY,  he was probably between 5 and 10 years old during the wars.

One site specifies that Din Djarin was born sometime between 30 to 27 BBY. If he was born in 30 BBY, then the Mandalorian was about 11 years old at the end of the Clone Wars.

Either way, Din Djarin is a younger child during the prequel movies.

How Old Was Din Djarin When His Parents Died?

Din Djarin was also quite young when his parents died. He was rescued by the Death Watch, a break-off group of Mandalorians, at the end of the Clone Wars in 19 BBY. Some contend that this group killed Din Djarin’s parents, but The Mandalorian hints at a different cause.

The main storyline is that Separatist battle droids attacked the homeworld of Djarin’s parents, who hid him underground.

His parents remained above ground and the droids presumably killed them during their attack. Din Djarin is rescued by the Death Watch before a droid almost kills him.

Since these events occur in the same year as the end of the Clone Wars, Din Djarin is between 5 and 10 years old when his parents died.

How Old Is Din Djarin in Kenobi?

Referring to our Star Wars chronology, the Obi-Wan series Kenobi takes place 10 years after The Revenge of the Sith movie. Obi-Wan has gone into hiding on Tatooine after the Jedi have been almost completely wiped out.

The Revenge of the Sith concludes in 19 BBY, and Kenobi takes place in 9 BBY. Hence, the Mandalorian is probably in his teens to 20s during the Kenobi show. 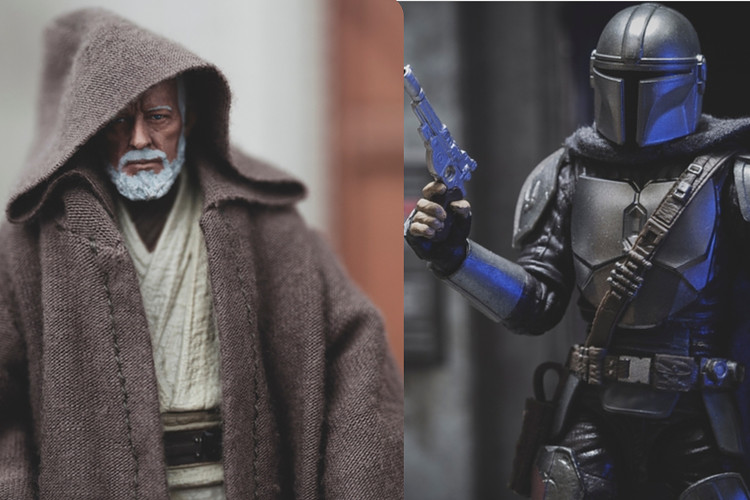 The worlds of The Mandalorian and Kenobi could feasibly interconnect. This is an overlap that Lucasfilm’s Kathleen Kennedy has indicated is quite possible.

A young Din Djarin intersecting with an aging Obi-Wan could make for a very interesting episode or series. Fans would probably like to see this storyline.

We can refer to the two main television shows, the Star Wars timeline, and movies to get an indication of Din Djarin’s age.

From The Mandalorian, we can conclude he is in his late 30s or early 40s. From The Book of Boba Fett, we get the same estimate since the time of these shows overlap.

Through flashback scenes, we see Din Djarin as a young boy around 5 to 10 years old during The Clone Wars. Since Kenobi takes place 10 years afterwards, we can conclude that he is about 15 to 20 during that series.

Could we see a younger Din Djarin colliding with Obi-Wan Kenobi? Only time will tell.