The darksaber is a unique type of lightsaber wielded by the Mandalore but is this one-of-a-kind weapon any stronger than a traditional lightsaber?

In specific scenarios, yes, the darksaber is stronger. It is heavier, allowing the wielder to deliver heavier strikes. It can super-heat beskar, the famously impenetrable metal. But like any weapon, the advantages the darksaber might give you can easily be counteracted by your opponent.

How is the Darksaber Different From Other Lightsabers? 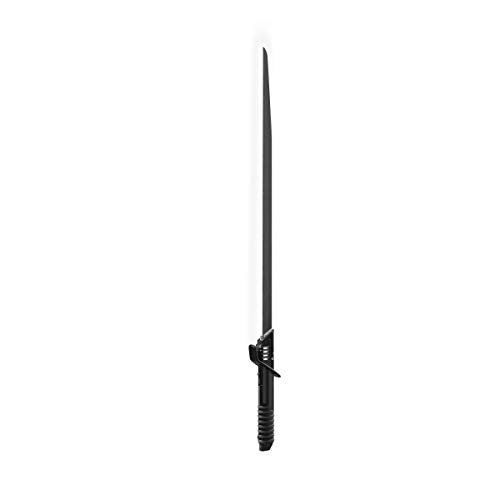 The darksaber, which is wielded by many characters throughout the Star Wars universe, is unique.

It is the only known darksaber in the Star Wars universe. And it is ancient.

It was crafted by the first-ever Mandalorian Jedi during the Old Republic era. The exact year is unknown, but the best guess is that the weapon predates the events of The Phantom Menace by over 1000 years!

Is the Darksaber A Lightsaber?

The darksaber is a lightsaber, but its design is unique.

The lightsaber is shorter than most other lightsabers, and its appearance is more akin to a traditional metal sword than a proper lightsaber.

For instance, a traditional lightsaber has a cylindrical blade, but the darksaber emits a flat blade due to the slit construction of its blade emitter.

The blade’s hilt is made from Mandalorian beskar, an uncommon choice in lightsaber construction.

And, of course, the lightsaber is black in color with a white aura or halo surrounding it.

But despite these differences in appearance and construction, the darksaber is still a lightsaber. It is a plasma blade that utilizes a force-sensitive crystal. And it was built by a Jedi, Tarre Vizsla.

Does the Darksaber Have Special Powers?

It is not just the construction that makes the darksaber unique; it also has special abilities.

The first unique ability has to do with cutting power. The one material that no lightsaber can cut through is the Mandalorian steel known as beskar. But, the darksaber can heat beskar to the point it turns red.

So in a fight against an opponent wearing beskar armor, while you wouldn’t be able to cut through their armor, you could heat the material to the point it causes significant burns to the individual wearing the armor.

The force crystal that resides within the blade is also sensitive to emotion. It can be seen in the 3rd season of Star Wars Rebels, Sabine learns how to wield the darksaber.

Despite not being a trained Jedi or having a connection to the force, when she wields the blade in a duel with her teacher, the meeting of the blades results in a strong reaction which Kanan (her teacher) tells her is a result of her emotional state.

This sensitivity could indicate a uniqueness in the crystal the darksaber uses.

During this same Star Wars Rebels episode, Kanan also indicates that the darksaber will attract or pull towards a lightsaber blade. Normally lightsaber blades either repel one another or bounce off neutrally.

In combat, this unique ability could potentially disrupt the balance of the lightsaber wielder and the darksaber wielder.

It is impossible to know what gives the darksaber this ability. It is likely the result of its construction. Still, there is no way of knowing if this is unique to the darksaber or whether this and its other abilities were common to all lightsabers of that era.

Is A Darksaber Stronger than A Lightsaber? 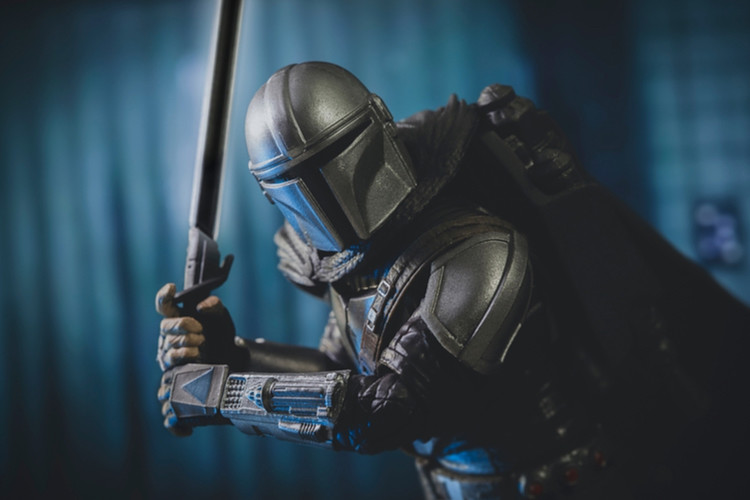 In some ways, the darksaber is stronger than a traditional lightsaber.

The hilt, for instance, is made out of beskar, a nearly indestructible material.

During a lightsaber duel, a combatant can use their lightsaber to slice through the hilt of their opponent’s lightsaber. However, the construction of the darksaber’s hilt prevents this.

The beskar construction of the hilt also adds to the weapon’s weight. The exact weight of the beskar components is unknown, but they are likely much heavier than non-beskar alternatives.

Additionally, the lightsaber is old, so it is very possible that the components used in the darksaber’s hilt construction are large, heavy, and possibly outdated.

The weight of the hilt, while potentially making the darksaber harder to wield, also gives the user a competitive advantage in using the hilt to inflict blunt force trauma.

Can The Darksaber Cut Through Beskar? - Star Wars Explained

It is important to note that these advantages could make the darksaber stronger in certain situations, but in other situations, a regular lightsaber might be stronger.

For instance, the lighter weight of a traditional lightsaber will make it easier to wield in lengthier battles, and a longer length would allow the lightsaber wielder to strike from a greater distance.

Can the Darksaber Cut Through a Lightsaber?

Lightsabers are plasma weapons that are contained using electromagnetic fields. When two lightsabers collide, they may spark and sizzle as they hit, but one will deflect the other.

The same is true of most energy weapons. Energy pikes and blaster bolts are easily deflected by a lightsaber. Even force lightning can be absorbed by these blades.

Because of the physics at work, no lightsaber can cut through another lightsaber; this includes the darksaber.

But one lightsaber can short out the blade arc of another if one blade has a significantly stronger power source. This shorting out of the blade will cause the inferior blade to appear to pass through the stronger blade.

It is not just lightsabers that can do this. There are a variety of lightsaber-resistant materials across the Star Wars universe that have the same ability to interrupt lightsaber function, i.e., Cortosis armor.

What Lightsabers CAN'T Cut Through in Star Wars

The one way in which a darksaber can cut through a lightsaber is the hilt. Unless the hilt is crafted from a lightsaber-resistant material, the darksaber will be able to easily slice through the hilt.

The darksaber, in contrast, has a hilt made out of beskar. Beskar is impervious to lightsabers, so a direct hit to the hilt wouldn’t leave a scratch on the darksaber.

Is the Darksaber the Only Black Lightsaber?

Yes. The darksaber is the only known black lightsaber in the Star Wars Universe.

It might be the rarest color of lightsaber in the Star Wars universe.

Purple is also rare, with Mace Windu being the only person in Star Wars canon to have wielded one. Although in the Legends universe, the stuff removed from canon, there were other Jedi who wielded purple blades.

White is another rare color, with the only known instance being that of Ahsoka Tano’s two lightsabers that she crafted with purified crystals she obtained upon defeating a Sith Inquisitor.

This leaves black, purple, and white tied for the rarest color of lightsaber blade.

Why is the Darksaber black?

It is unknown what exactly makes the darksaber appear black.

In most lightsabers, the kyber crystal is the element that determines a blade’s color. Each kyber crystal bonds with a Jedi and takes on a color that reflects their connection with the force. The color of lightsaber a Jedi wields could be said to be a reflection of their soul.

Considering this, it would seem like an exceptionally bad thing for a lightsaber to be black in color. Did the creator have a black soul?

It is important to note that a kyber crystal can change color under certain circumstances. For example, if another Jedi uses a lightsaber for an extended period, the crystal can realign itself to the new user.

When a Sith uses a lightsaber, they have to bleed the crystal, which turns it red (or a similar shade like orange-red).

And, Ahsoka Tano, when she purified corrupted Sith kyber crystals, she turned them white.

Perhaps the kyber crystals in the darksaber are white, and something in the construction of the blade gives it the appearance of having a black core?

Only the creator, Tarre Vizsla, would be able to tell us why the darksaber is black.

Is the Darksaber a Sith weapon?

The darksaber was created by a Jedi. A Mandalorian Jedi, during the Old Republic era, which is 1000 years before the events of The Phantom Menance.

After that Jedi’s death, the Jedi Order held onto the lightsaber, but it was stolen by the Mandalorians during the fall of the Old Republic. During the ensuing battle, and for many years after the theft, the darksaber was used to slay many Jedi.

Once in the Mandalorians’ hands, the darksaber became a symbol of power and was passed from Mandalore to Mandalore either through inheritance or by defeating the previous owner in combat.

During the clone wars, Darth Maul got ahold of the darksaber, taking it from Vizsla after defeating and executing her. After that, he wielded the darksaber for quite some time until it came into the possession of Sabine Wren.

It changed hands multiple times, being wielded by an imperial and a bounty hunter.

Even though the weapon was wielded for a time by a Sith, it was created by a Jedi and served many users, dark side, light side, and even those with no connection to the force.

The darksaber is simply a weapon, one that anyone can wield.

Thank you, this really helped me learn the lore of the darksaber