Star Wars fans of all ages are familiar with the ever so popular lightsaber, but did you know that the Darksaber exists?

The Darksaber first made its appearance in the Star Wars: The Mandalorian season one finale. So, any fan that has not seen The Clone Wars may not be familiar with the blade or its origins.

There have been various colors of lightsabers released in the Star Wars universe, but it wasn’t until the final part of the trilogy that new colors were introduced.

It’s even widely known that Samuel L. Jackson requested a purple lightsaber. Of course, he got it, as George Lucas gladly obliged.

This was not in the original plan for lightsaber colors, since the basic colors were green and blue for the Jedi. Then there was red for the Sith.

Later on in the trilogy, a black lightsaber was introduced into the Star Wars universe.

Sporting a hard to miss, iconic black blade, the Darksaber quickly rose to fame within the community. This beautifully crafted lightsaber created mystery in the minds of Star Wars fans everywhere.

So, what even is the Darksaber? Why is it black?

Is the Darksaber the only black lightsaber in the Star Wars universe?

Keep reading as we do a deep dive into the Darksaber’s history, and answer these questions.

Why Is the Darksaber Black?

What Is the Darksaber?

If you were thinking that the Darksaber is a “dark lightsaber,” then you are exactly right!

The Darksaber is a lightsaber adorned with a short, black blade. Unlike a lightsaber, this one has a blade shaped like a traditional sword.

The Darksaber’s design is Mandalorian down to the last detail. Even the sound coming out of the Darksaber is a higher pitch than the lightsaber.

This blade is one of the best contenders of the lightsaber. Both have an almost magnetic pull towards each other.

Similar to its predecessor, the Darksaber cannot cut through the beskar. Instead, it was able to heat it to the point of red hotness. The power of the Darksaber was so great that the Mandalorians saw it as a status symbol.

As a matter of fact, it became customary to only be able to obtain the Darksaber by defeating the previous wielder through an intense battle.

If it is gained through other means, then it was not a legitimate claim and holds no grounds. The only person who broke this trend was Bo-Katan. He obtained the Darksaber from Sabine Wren without combat, and that was acceptable.

So, Why Exactly Is the Darksaber Black? 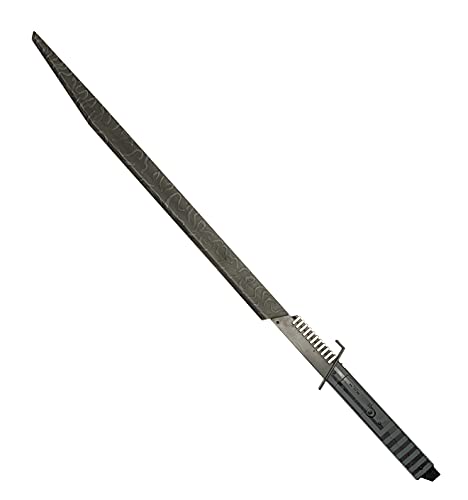 According to Dave Filoni, George Lucas diverted from the original plan for the saber’s wielder to use a vibroblade, as he didn’t believe it could stand up against a lightsaber. That’s when they decided to modify the design and essentially made it into a black lightsaber.

In the show, however, the origin of the Darksaber’s distinctive black blade is said to come from the unique black kyber crystal used.

Does the Darksaber Use a Black Kyber Crystal?

It is well known that in the Star Wars universe, every Jedi must forge a Lightsaber from a kyber crystal that represents themselves.

Tarre Vizsla is no different. Being the first and only Mandalorian Jedi in Star Wars history, he set off to find his crystal to build his lightsaber. That kyber crystal ended up creating a black lightsaber, affectionately known as the Darksaber.

Now, the crystals themselves aren’t naturally colored, however, they change based on their wielder’s position in the force. The kyber crystal’s color changes due to wielder’s thoughts and actions.

These assist the blade’s power current. Moreover, thanks to the crystal, the blades produce an electrical pulse in response to the user’s emotional state.

The black look of the Darksaber has boggled the minds of the Star Wars fandom since its debut.

Despite this, there is speculation that the color stems from the unique steps used in the Darksaber’s creation, as well as the kyber crystal simply working as it usually does. The crystal reacted to its Jedi, Tarre Vizsla.

Is the Darksaber the Only Black Lightsaber?

In the Star Wars universe, the Darksaber is the only black lightsaber. 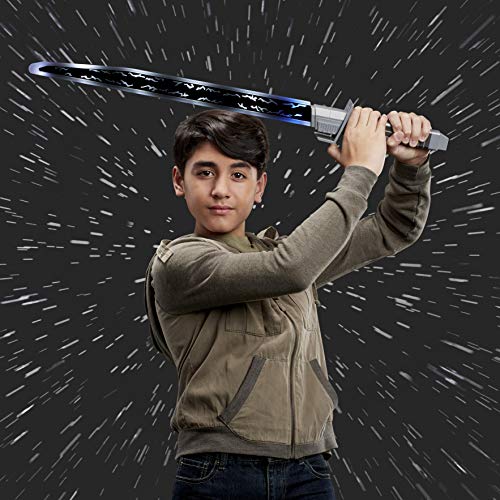 To begin with, Star Wars only had two lightsaber colors. Then by the final film of the trilogy, George Lucas added a green lightsaber for Luke Skywalker.

As mentioned before, in Star Wars, the seekers of kyber crystal can just go searching then come back with the color they want. The kyber crystals change color based on the specific force-user who possesses it.

Needless to say, black is one of the rarest colors to ever surface over the thousand years of the Star War trilogy.

Despite having little knowledge, the Darksaber still has many mysteries about it that plague the mind of the Star Wars community.

With this unique weapon finally being adapted into the live-action version of Star Wars, fans were finally able to get some insight into this peculiar weapon.

Lightsabers are undoubtedly an important part of Star Wars lore, and they play an integral part of a Jedi’s journey throughout the series.

Since its canon, George Lucas has released many lightsaber colors. There was orange for Jedi: Fallen Order and yellow for Star Wars: The Rise of Skywalker. These colors are fairly common throughout the franchise. Black, however, is few and far between.

With the long standing relationship Star Wars fans have with the basic colors of lightsabers (red, blue, green, orange, purple, and yellow), this new addition was welcomed.

The rarity of the kyber crystal turning black allowed the Darksaber to be a special addition to the trilogy. As far as we know, there is only one, and only one person who is capable of forging a Darksaber.

This alone makes the Darksaber an impressive weapon, and an amazing wonderment for all Star Wars fans to marvel at.