If you’re a Star Wars fan, then you’re probably familiar with the Darksaber. This unique lightsaber has a flat, sword-shaped blade that glows black and seems to have far greater powers than the average lightsaber.

Given its apparent strength and power, you may be wondering: is it made out of Beskar?

Keep reading to find out!

How is the Darksaber Made?

The Darksaber was made by Tarre Vizsla, the only Mandalorian to become a Jedi. He constructed the Darksaber sometime before 1032 BBY.

It is a unique weapon. Though it shares many similarities with the lightsaber, there are times when it is wielded against lightsabers that it appears drawn to them in a sort of magnetic pull. What’s more, unlike the lightsaber, it responds to the emotional state of the wielder.

Both lightsabers and the Darksaber have blade emitters, with the plasma blade-generating crystal inside the hilt.

Let’s get into specifics about how Darksaber was made and what makes it unique from other lightsabers.

Is the Darksaber Made with a Kyber Crystal?

The short answer is that no one knows for sure.

Kyber crystals are used in lightsaber construction to generate the blade. They take on their unique color when they respond to their new master, and they are then forged into the lightsaber when it is built.

According to Wookieepedia, the Darksaber’s blade is generated by a crystal, but the type of crystal is not stated. This article from Fiction Horizon explains that the crystal used may have been a “synthetic Kyber crystal” that Tarre Vizsla created.

Kyber crystals turn color in response to the Force within the one selecting the crystal, but as far as we know, the Darksaber is the only one ever created with black color. Perhaps because Tarre Vizsla, as a Mandalorian Jedi, was an anomaly, the crystal responded by producing a unique blade.

It’s also possible that Vizsla deliberately manipulated the crystal in some way to make it glow black. He could have done this using the Force or some forging technique subsequently lost to Star Wars history.

Either way, the forging of the Darksaber occurred so far back in Star Wars history that the true crystal used and how it became black is shrouded in mystery.

Is the Darksaber Hilt Made of Beskar? 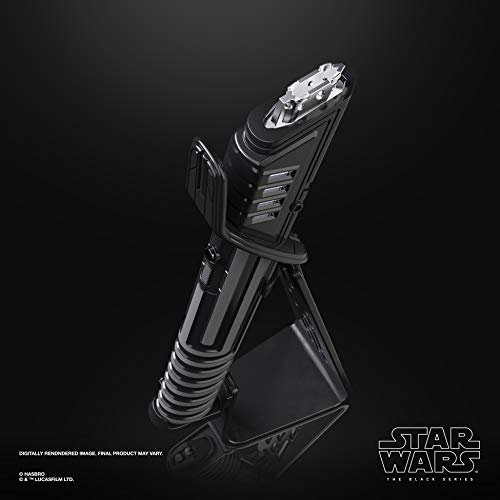 Beskar is a metal only found on a few Mandalorian worlds and is known for being one of the toughest metals in the Star Wars universe.

The Darksaber has a hilt, emitter, and pommel constructed of Beskar, making it one of the most powerful weapons in the galaxy. Why?

Because Beskar is the only thing that can damage Beskar.

Though the metal can withstand lightsaber cuts and fire from close-range blasters, it can be damaged (though not destroyed) by a weapon made of Beskar.

Therefore, because of its rare construction, the Darksaber can damage anything made of Beskar, an ability most lightsabers don’t have.

Which leads us to another question:

Can the Darksaber Cut Beskar?

Beskar can be damaged by a weapon made of Beskar, but that doesn’t mean it can be destroyed.

Because the Darksaber has a Beskar hilt, it is powerful enough to heat Beskar to a glowing red; but as far as we know, it cannot cut through it.

This is clearly shown in the duel between Din Djarin and Moff Gideon in The Mandalorian’s Season 2 finale. Gideon, wielding the Darksaber, cannot cut through Djarin’s Beskar armor or destroy his Beskar spear–though the Darksaber repeatedly heats the spear to make it glow.

The Mandalorian Din Djarin vs Moff Gideon | Duel of Fates

Of course, it’s possible that we could see something different in the future–the Darksaber in the hands of a truly powerful wielder could potentially be unstoppable.

For example, a powerful Jedi or other Force user might be able to channel enough energy through the saber that it could further heat Beskar, causing it to melt or even break.

With that in mind, it would be interesting to know what it might have been capable of in Tarre Vizsla’s hands, as he must have been a powerful Jedi to create the Darksaber.

Is Beskar Stronger than Vibranium?

Vibranium is a metal in the Marvel Universe, most notably used to make the Black Panther’s armor. Vibranium is extremely tough, can absorb energy, and has an extremely high melting point, so it’s extremely difficult to forge into anything.

Sometimes it is molded with a Molecular Rearranger, and once this has been done, it is nearly indestructible because of its ability to absorb anything thrown or shot at it.

But is it stronger than Beskar?

So when it comes to durability, particularly against high heat, Beskar is much stronger than Vibranium.

Vibranium’s ability to absorb energy may make it somewhat stronger than Beskar in other ways. Though Beskar apparently can’t be destroyed, it doesn’t appear to absorb heat or blows from anything.

In fact, its weakness was shown when Sabine Wren’s superweapon, known as the Arc Pulse Generator, was used against her own people to superheat Beskar, killing anything that might be behind it due to the heat it could conduct.

Vibranium does not conduct heat in the same way; instead, it absorbs it.

So in terms of pure durability and strength, Beskar wins; but in terms of the ability to absorb whatever’s hurled at it, Vibranium wins.

The Darksaber is a unique type of lightsaber created by Mandalorian Jedi Tarre Vizsla. Part of what makes it unique is that its blade emitter, pommel, and hilt are all made of Beskar.

Because of this, the Darksaber can hold its own against weapons and armor made of Beskar; though it cannot cut through the superstrong metal, it can heat it to the point of causing it to glow red.