The Mandalorian showed us that the Darksaber is one of the most powerful weapons in the galaxy. So powerful, it caused speculation about whether it eclipsed that of the more popular lightsaber.

The Darksaber holds qualities that may give it more power than the lightsaber. Non-Force-users can use it to a greater degree. And the Darksaber proved its strength by burning Beskar, something a lightsaber could not do.

However, strong Jedi like Yoda that has forged a powerful bond with their lightsaber may find they’re better off with it than the Darksaber.

The Darksaber’s unique black blade is one of the rarest in Star Wars Canon.

It also has a more unique history than the lightsaber. While lightsabers are an extension of Force-adept Jedi and Sith, the Darksaber was the brainchild of Mandalorian Tarre Vizsla, the Jedi Order’s first Mandalorian, and it could connect with anyone.

Following Vizsla’s death, the Darksaber remained in the Jedi Temple on Coruscant until a group of Mandalorians stole it during a clash with the Jedi, believing it should return to the House of Vizsla.

The Darksaber also stood as a sign of unification among the Mandalorians, and its possessor claimed themselves the ruler of Mandalore.

The Darksaber, despite its similar functions to the lightsaber, differs in aesthetics. It boasts a shorter blade, and it looks more like a medieval sword. Something its slit-shaped emitter further implied.

Most lightsabers had round pommels, while the Darksaber’s angular pommel further carried the Mandalorian flair. The Darksaber’s sound also held a higher pitch than its lightsaber counterpart.

The Darksaber, given its rarity, was a hot commodity. Like the Elder Wand from Harry Potter, one wishing to claim possession of the Darksaber had to defeat its current possessor in a duel.

This is how Din Djarin came to possess it in The Mandalorian.

The Darksaber’s Powers and Abilities

Why The DARKSABER Is the MOST POWERFUL Lightsaber In Star Wars

In the Season Two finale of The Mandalorian, the Darksaber showed it could overheat Beskar. This was something the lightsaber did not accomplish during Ahsoka Tano’s duel with her white-bladed lightsabers.

This implies the Darksaber may have more strength than the lightsaber. If someone with a strong Force connection wielded it, could the Darksaber accomplish more than overheating the steel?

Given its ease of use from those without Force-sensitivity, it further implies the Darksaber is stronger than its lightsaber counterpart. Non-Force-users have traditionally had a harder time using a lightsaber, although they are not impossible for them to wield.

One major drawback about the Darksaber is that it could grow heavier with each swing. If its user did not show emotional discipline when using the weapon, they risked “fighting against it,” and not with it.

Therefore, it took prospective users, Force-sensitive or not, time to master the weapon. 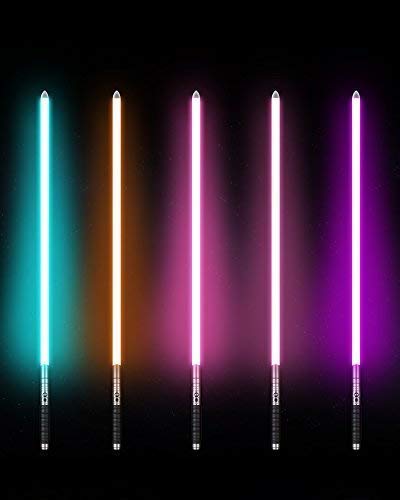 Lightsabers are arguably the most distinguished relics in cinema history. Unlike traditional swords, lightsabers were able to block blasters and the user wielded them for offensive and defensive purposes.

They also stood as a symbol of peace and justice while providing hope for weaker souls in the galaxy.

Despite the presence of long-range weapons, lightsabers still held precedence in the Jedi Order given the connection Force-users had with them.

Lightsabers were also unique in that they were used as deterrents, rather than weapons of aggression, unless necessary. They primarily gave opponents an opportunity to surrender before engaging in combat.

While their Sith counterparts thought otherwise, the Jedi’s intent with their lightsabers was to make their kills quick and clean if they needed to resort to violence. This minimized an opponent’s suffering and further kept the Jedi from becoming numb to killing.

The Lightsaber’s Powers and Abilities

Lightsabers cut through almost anything, and we often saw how painful it was to be on the receiving end of a lightsaber blow.

When Count Dooku slashed Obi-Wan Kenobi in the arm and leg in Attack of the Clones, he took the Jedi Knight completely out of the duel.

Later, Dooku sliced off Anakin Skywalker’s arm with one swipe. The same fate met Luke Skywalker when he dueled Darth Vader for the first time in The Empire Strikes Back.

Lightsabers were also hard to block. Other than Beskar and other rare metals, only the electrostaff, Z6 riot control baton, and few other weapons were capable of withstanding lightsaber blows.

Skilled Jedi and Sith could also use lightsabers to accurately deflect blaster bullets away from themselves or reflect them toward their shooters.

And those like Yoda and Mace Windu even used their lightsabers to block Force lightning from powerful Force sensitives like Darth Sidious.

Wielders could not become skilled in lightsaber combat overnight. They needed to continually practice and ultimately master one of the seven forms of combat. Skilled Jedi learned multiple forms while the best, like Yoda, mastered all seven.

Is the Darksaber More Powerful Than the Lightsaber?

Why the Darksaber is Stronger?

Why Mandalorian Proved the Darksaber Is STRONGER Than a Lightsaber! - Star Wars Explained

The finale in Season Two of The Mandalorian implied that Darksaber is more powerful than the lightsaber. Given its ability to burn Beskar with non-Force-users wielding it, what could a strong Force-sensitive do with the Darksaber?

Beings with less Force-sensitivity were better equipped for handling a Darksaber. This is because the Darksaber’s crystal forges a connection with anyone, which lightsabers cannot do.

Those who brandished the Darksaber could also lead and unify Mandalore, giving them large numbers at their command.

Why the Lightsaber is Stronger?

While it’s easy to theorize what a strong Force-sensitive like Darth Vader or Luke Skywalker could do if they possessed the Darksaber, we don’t yet know how destructive they could be until Star Wars Canon explores the idea.

But we know how strong Force-sensitives are with their lightsabers, especially those like Yoda and Mace Windu, two of the most powerful Jedi throughout the Prequel Trilogy.

Why Yoda May Be the Best Lightsaber Duelist In Star Wars

One reason is that lightsabers served as extensions of their Force-adept owners. Kyber crystals could form a strong bond with a Jedi. Especially if they had a deep connection to the Force.

So if someone like Yoda or Mace Windu held the Darksaber, could they bring about that same bond?

It could be possible if they were in the correct emotional state, which via the Darksaber’s crystal would grant them more power.

But, given a Jedi like Yoda who controlled his emotions well, could he bring about the full power of the Darksaber? Or is he better off with his green-bladed Shoto?

While the Darksaber overheated Beskar and let non-Force-wielders use it efficiently, stronger Jedi were better off with their lightsaber.

It’s clear that the Darksaber is powerful and even non-Force-adept beings can use it effectively.

But the Darksaber is not for everyone, given the bond many Jedi share with their lightsabers.

As for non-Force-users, it’s a straightforward answer: They are better off with the Darksaber.

While non-Force-users can still wield a lightsaber, they cannot do so to the same degree that they can wield the Darksaber. The Darksaber can strengthen if one’s emotional state grows higher, regardless of their overall Force-sensitivity.