This is not the correct question. The true question here is what color are Dark Side users’ eyes? And the answer is yellow, orange, bronze/amber, and sometimes completely red or has a ring/burst blood vessel look around the pupils.

And what about those that are born with yellow eyes or gain a disease that results in yellow eyes? (That’s a real thing).

This article will focus mostly on canon and legend lore, and also throw in a theory. I hope you enjoy it.

What Color Are Sith Eyes?

Most of the time Sith eyes are yellow, but they can also appear orange, bronze/amber, red or just have a red ring or look more like burst blood vessels, (Darth Maul is the best example of this in The Phantom Menace).

The exact color may just be due to the medium of the time (CGI and contact lenses can look very different from animation). This could also be a creative difference by the directors.

(Another key feature of Sith Eyes is that it appears to glow. It’s unknown if this helps them see in the dark, but they make a statement on screen).

Do All Sith Have Yellow Eyes?

No. There are many cases where a Sith (or someone claiming to be one), don’t have yellow eyes.

Palpatine didn’t have yellow eyes until his battle with Mace Windo. Kylo Ren, Snoke, and some of the Inquisitors didn’t have them either.

Anakin Skywalker didn’t have yellow eyes until he killed the Seppertists on Mustafar. And what if you’re born with yellow eyes?

Like Darth Maul and many of the Zabraks on Dathomir. Most of the males have yellow eyes, but most weren’t Sith, (or true Sith).

This is because Dathomir is one of the planets with  an affinity with the Dark Side. Granting the Nightsisters powerful magic, and giving the Nightbrothers yellow eyes.

Interestingly,  Palpatine didn’t know it was possible to be born with yellow eyes, or have a strong connection to the Dark Side from birth. This intrigued him and played a large role in his decision to take a young Maul for his apprentice, (much to Mother Talzan’s anger).

Why Do The Eyes Of The Sith Turn Yellow?

According to Star Wars: The Visual Encyclopedia, yellow eyes occur when a Force user fully embraces the Dark Side and lets their rage take over. But then, why don’t they stay yellow all the time or how did Palpatine hide his yellow eyes while he was in the Senate?

This is my theory. I believe that Palpatine used a combination of Sith/Dark Side magic and a skill called Force Concealment.

Palpatine was very cunning and extremely patient. He knew he’d be around Jedi, (and even grew close to Yoda who was called the greatest Jedi of his age).

He knew he needed a way to hide in plain sight and simply not tapping into the Dark Side wouldn’t be enough to ensure his survival. So, how did he pull it off?

Force Concealment is one of the oldest techniques designed by the Sith, to hide all traces of the Dark Side from the Jedi. It didn’t cut them off though.

This also explains how Palpatine could walk around in his dark robe, and still not be recognized by the Jedi when they encountered him. (This always irritated me since his voice didn’t sound different, which makes me believe that magic was also involved).

Now at what point exactly does the yellow eyes begin? That depends on the individual. Anakin Skywalker’s eyes shifted from yellow to blue during Revenge of the Sith, a few times.

It wasn’t immediately after he swore to Palpatine and became Darth Vader. He didn’t have yellow eyes when he killed the Younglings or led the attack on the Jedi temple.

He got them while he was killing the Seppertists, but they changed back when he saw Padema, (his pregnant wife). They were also normal during most of the fight with Obi-Wan Kenobi.

Why? Because he didn’t hate them, (he said he hates Obi-Wan after his former master cut off his legs and one of his arms, but that was at the end of the fight).

Anakin's fall to the dark side

He didn’t hate the Younglings or the Jedi he encountered in the Temple, but Palpatine told him to show no mercy. Because that was how he would feel the true power of the Dark Side.

I’ll get to Dooku in a bit, but let’s talk about Kylo Ren, (Ben Solo), and Snoke, (failed clone of Palpatine). We never see either of these characters with yellow eyes, (Kylo Ren gains them in a comic when he’s bleeding a kyber crystal, but that’s it). 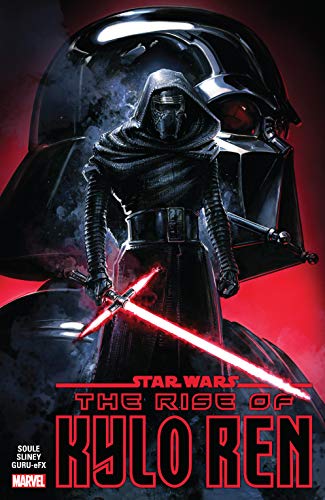 We don’t have a good answer for Snoke, (theories cover the fact that he’s injured, can’t access the full power of the Dark Side because he’s a clone, or seeking a perfect balance between Light and Dark)? But, we can explain Kylo Ren.

Unlike Darth Vader (whom he idolized because he was his grandfather), Kylo Ren was conflicted and drawn to the Light, (which he hated). Even though he claimed to hate his father (Han Solo) he took no joy in killing him.

He blamed his family for being the way he was, and even told Rey that Han Solo would disappoint her eventually. Killing his father only pushed him further from the Dark Side.

Arguably making him weaker as the conflict took a worse turn when he sensed his mother on a ship in front of him. (Leia sensed Kylo Ren as well, yet she said nothing as he blew up her ship).

The bond between mother and son was shown throughout episode nine. And we never see Kylo Ren fully embrace the Dark Side after that.

Not in the films, but in the animated Clone Wars, we see Dooku with Sith eyes on a few occasions. (In rare moments of rage, fighting Anakin Skywalker, and in a vision shown to Yoda).

Sith eyes occur when one has surrendered to the Dark Side, and let their negative emotions take control. It’s possible to conceal/control this effect, but reaching this means that one is a true Sith.

It’s also possible to be born with yellow eyes as is the case for Darth Maul and Savage Opress. Not having Sith eyes doesn’t mean you cannot use the Dark Side, but it can be interpreted as not being a true Sith.

Thank you for reading, and remember: The Force shall set us free.