The Tusken Raiders, simply known as Tuskens (or less politically correct, Sand People), were sentient beings native to the desert planet of Tatooine. The Tuskens were hostile people, especially to local settlers who found themselves on Tatooine.

Because they were indigenous to Tatooine, the Sand People became extremely territorial. They were protective of their domestic resources and developed extreme xenophobia.

Anyone who was not a Tusken Raider was considered a trespasser, whether they were local to Tatooine or not. The Tuskens would usually opt to attack people they came in contact with in a misguided attempt to protect their homes.

Following the aboriginal way of life, the Sand People’s clans were relatively small (around twenty to thirty people) and consisted of clan leaders, tribal chiefs, and warlords at the helm.

In terms of dress, the Tusken Raiders were generally seen as being fully-covered. This raises the question of what Tuskens looked like barefaced.

As always, this topic and more will be discussed as we go through the article. Without further ado, let’s dive in.

What Tusken Raiders Look Like Under The Mask! (The Book Of Boba Fett) | Star Wars Explained

Throughout the franchise, the Tusken Raiders were fully covered at all times. They always wore gloves, loose full-length robes, and masks. Essentially, the Tuskens ensured that every inch of them was covered.

Now, this may seem counter-productive as they lived on a presumably hot, desert-covered planet. However, there was a reason for it.

People who live in a sand-covered country like Egypt used to wear long clothes and remain covered. While there may have been religious connotations attached to it, clothing like this was used to protect the wearer. 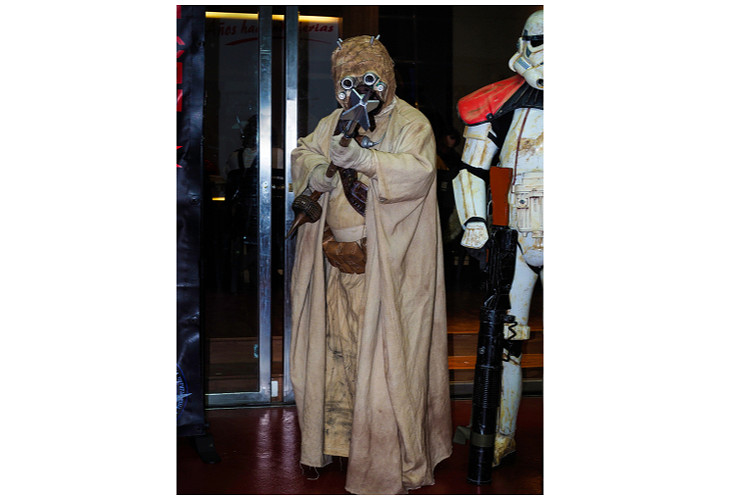 Well, the Tusken Raiders have only been shown unmasked once in Star Wars: Expanded Universe, which has since been rebranded as Legends. Remember that because of this change, the Tusken’s true appearance may no longer be canonically accurate.

Furthermore, in Canon, there haven’t been many descriptions made of their appearances, and they have not been shown without their masks. What this means is that there is no definitive answer as to what they looked like underneath the mask.

As such, it has been speculated that the Tuskens had cat-like or ape-like appearances. The general appearance of the Raiders was compared to that of any predator.

It makes sense for their appearances to be varied as the Tuskens were a combination of individuals from varied backgrounds, but more on that later.

Why Do Tuskens Wear Masks? 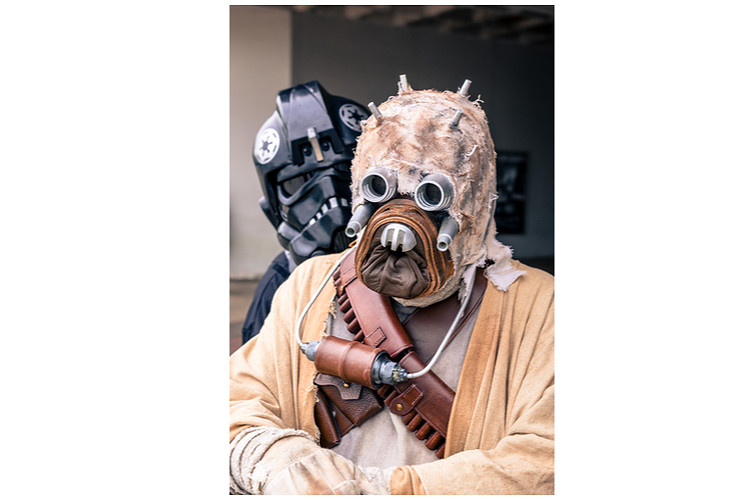 As we established, the Tusken Raiders constantly wore long clothing and masks, mainly because of the climate they lived in. Being covered protected them from the heat of the sun and from the abrasive sand.

Additionally, with all the sandstorms that would normally occur on a desert planet like Tatooine, the general environment would not have been the safest. Thus, Tuskens wore their masks to protect their eyes, noses, and mouths (and lungs, for that matter) from the harsh elements.

Apart from the practical uses of the mask, the Tusken Raiders were portrayed as a violent and proud people. They wanted to protect their home against outsiders by any means necessary. To them, this meant brutally annihilating the person and never showing any vulnerability.

This is where the masks come in. It can be hypothesized that Tuskens would have removed their masks for special occasions like weddings and coming-of-age events.

However, a Tusken would not have wanted to be barefaced in front of an outsider, as that would leave them in an exposed position. This is exactly why any outsider who happened to catch a glimpse of an unmasked Raider would be put to death immediately.

What Race Are the Tusken Raiders?

Tuskens were generally thought to be a non-human species.

Originally, Tuskens seemed to be based on indigenous races. They were a nomadic race who were among the first inhabitants of Tatooine. Nevertheless, it can be argued that the Tusken Raiders were much more than this.

Similar to the Mandalorians, the Tusken Raiders were more of a movement than a race.

Based on the varied facial interpretations (cat-like, ape-like, and predator), it can be assumed that the Tuskens Raiders’ community encompassed different species that they accepted as their own.

Whether this is through interspecies mating or some other initiation process, there’s theoretically a chance (albeit rare) that members of any species would be accepted by the clan, so long as they adhere to the Tusken Raider’s way of life.

Is Boba Fett a Tusken Raider? 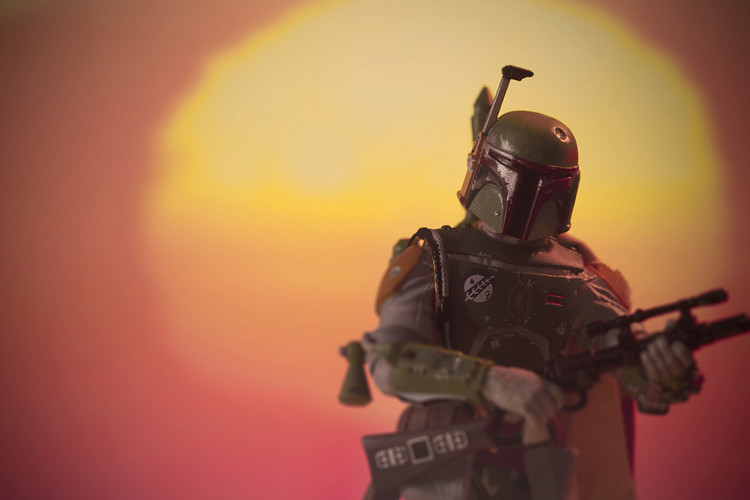 All things considered, Boba Fett was not born as a Tusken Raider. Instead, he was one of the few outsiders who was initiated into the tribe.

He was a human male bounty hunter who held an illustrious career for quite some time, spanning the fall of the Galactic Republic straight into the end of the Galactic Empire’s reign.

Boba Fett was created by cloning the legendary Mandalorian bounty hunter Jango Fett, who later raised him as if he were his son.

Boba Fett understandably felt like he had to live up to the reputation his father had. As such, he emulated Jango as best as possible, by wearing his Mandalorian armor and becoming one of the best bounty hunters in the galaxy.

Throughout his career, Boba Fett amassed his own reputation for his bounty hunting and was seemingly untouchable. That was until he fell into Jabba the Hutt’s Sarlacc pit.

Usually, this would have been a death sentence. However, Boba Fett was different. He fought his way out of the pit and lay on the sand-covered floor to recover.

It was at that point that Fett was caught and carried away by Tusken Raiders.

While he served as a prisoner, Boba Fett used his quick thinking to earn the clan’s respect. With that, Fett became an honorary Tusken and lived alongside his new tribe.

Do Tusken Raiders Have Genders? 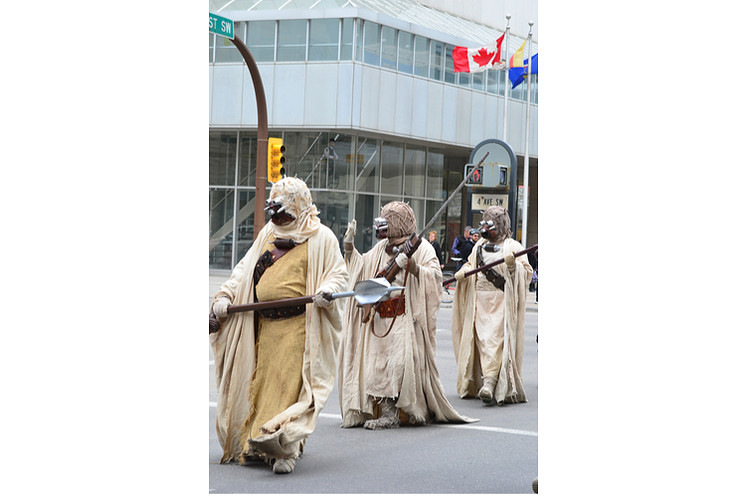 The Tusken Raiders had two distinct genders: male and female.

Although it may be difficult to tell at first (due to the heavy clothing and mask), Tusken males and females had some visible differences. Their clothing was a bit different from one another.

The men usually had rougher, thicker clothes. This is because they were the warriors of the clan and required more protection from the elements.

On the other hand, the women’s clothing was still protective but not as thick or heavy as their male counterparts. Since they were not ordinarily going to war (though it was not unheard of), the women’s clothes didn’t need to be heavy-duty.

Moreover, the Tusken women could be differentiated by their bejeweled eye masks and winding sheets that covered their torsos.

The Tusken Raiders were a group that piqued the interest of many Star Wars fans.

They were depicted as ruthless beings who would kill another person without giving it a second thought.

While this is true, the Tuskens were protecting their way of life on Tatooine and believed what they were doing was the right thing.

What stood out the most about the Tusken Raiders was the way they dressed. The Tuskens wore long clothing and masks. This not only protected them from the harsh desert elements, but they also used it to hide from outsiders.

To that end, the Tuskens believed that outsiders seeing them without their masks made them vulnerable, an act that could only end in the outsider’s death.