Although Darth Vader is seemingly all-powerful, he cannot do everything alone. After all, he is only one man and would need a team to help him accomplish his goals.

When Order 66 was executed, Lord Vader did not do it all by himself. He had a team to help him unleash the dark side’s wrath on the Jedi.

Even in the aftermath of Order 66, when the Sith Lord was seeking out and murdering the surviving Jedi, he did not do it alone. Lord Vader had a group of trained assassins to help him.

This is a fantastic question that will be answered in this article. So keep reading as we get right into this topic.

Who are the Stormtroopers? 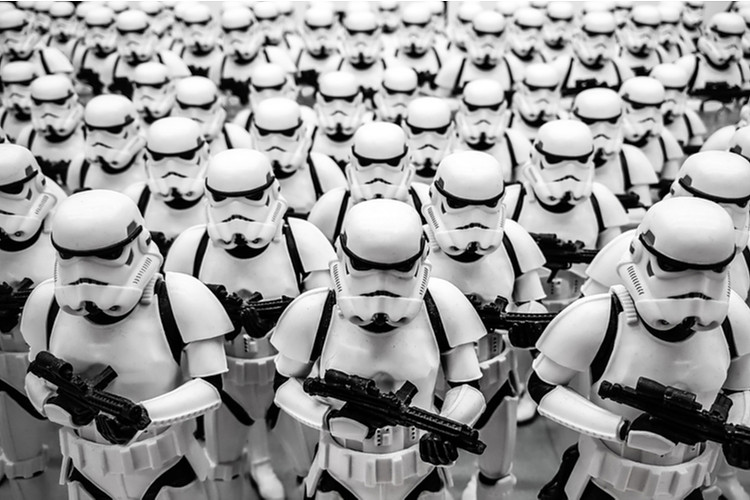 The Stormtroopers (sometimes referred to as Bucketheads) were the Galactic Empire’s foot soldiers. They were the front-line men for whatever war the Empire had to fight at that time.

These soldiers were modeled after the Republic’s Clone Troopers, who fought during the historic Clone Wars. As a matter of fact, when the Empire superseded the Republic, the Clone Troopers became the first generation of Stormtroopers.

Bucketheads were adorned with a black body glove over which were laid white Plastoid plates. For their weapon, the Stormtroopers wielded an E-11 medium blaster rifle.

Of course, just like any other military body, the Stormtrooper Corps was separated into factions. Aside from the regular infantry soldiers, there were also other specialized units such as the Scout Troopers and Snowtroopers.

So much so, that many fans believe that the Stormtroopers were brainwashed.

While this was not initially intended for the Stormtroopers, in later years they did become brainwashed and shells of what the Corps used to be.

In the beginning, Stormtroopers were volunteers—people who were willing to put their lives on the line for the Empire.

Later on, Stormtroopers essentially became kidnapped child soldiers who were ripped from families they would soon forget.

Once initiated into the Corps, these soldiers were forced into servitude and programmed for loyalty.

Do Stormtroopers Work for Darth Vader? 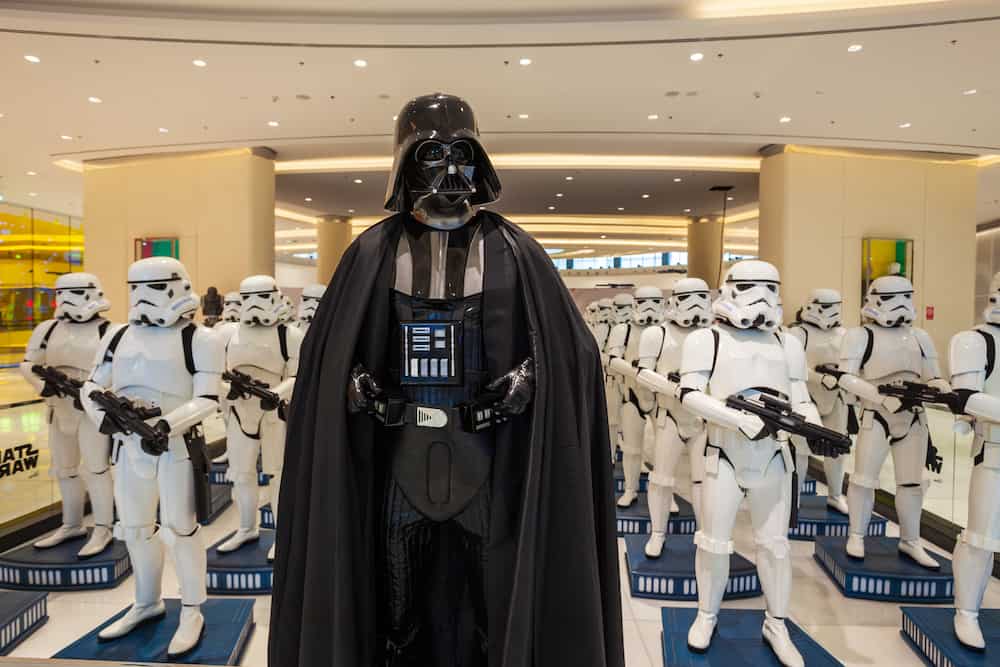 As mentioned before, the Stormtroopers worked for the Empire.

What this means is that they would serve the heads of the Empire: Emperor Palpatine and his subordinates, Grand Moff Tarkin and Darth Vader.

Therefore, the Stormtroopers did work for Darth Vader, even if they did not do so directly.

As one of the Emperor’s commanders (and his right-hand man), Darth Vader had the power to utilize the Stormtroopers whenever he needed to.

Specifically, the Dark Lord had his own army known as the 501st Stormtrooper Legion, or simply, the 501st Legion.

The origin of the 501st Legion preceded the Galactic Empire and dated back to the days of the Clone Wars.

At this point, the legion was made up of Clone Troopers who fought under the command of General Anakin Skywalker, Commander Ahsoka Tano, and Captain Rex (officially named CT-7567).

During the Clone Wars, the legion defended the Republic against the Separatist Droid Army. This allowed the 501st Legion to gain a reputation for their courage, steadfast loyalty, and unconventional strategies.

Naturally, an army this talented would be a great asset to the dark side. Still, they were not turned until Order 66 went into effect.

Once the Clone Troopers were corrupted to see all Jedi as the enemy, the 501st Legion, led by Darth Vader, stormed the Jedi Temple, killing any Jedi in sight. It did not matter if they were a Padawan, guard, or Jedi Master.

What’s more, as Darth Vader was their superior, the Stormtroopers had to refer to Darth Vader as “Lord.”

Who are Darth Vader’s Guards?

Apart from the conventional Stormtroopers, Darth Vader also had other military units who ran to his every beck and call. One such unit was known as Darth Vader’s Guards.

These guards came from a division of the Stormtroopers menacingly called the Death Troopers.

To preface, Death Troopers were a first-class variant of the Stormtroopers who were created by the Tarkin Initiative and were known for their stealth and lethality. Decked out in their all-black ensembles and voice scrambling helmets, the Death Troopers operated under Imperial Intelligence.

This group specialized in protective detail, especially for the more prominent Imperial officers and the members of the Tarkin Initiative. Therefore, it’s no surprise that these soldiers were the perfect choice for Darth Vader’s Guards.

These guards accompanied Darth Vader on many of his missions. They were with him when the Sith Lord traveled to the Lars Farm on Tatooine after the fight against Luke Skywalker on Cloud City.

In addition to that, the guards followed Lord Vader to Coruscant, where they protected Padmé Amidala’s apartment.

The seven Death Troopers that comprised Darth Vader’s Guards were given the most secretive and specialized missions.

Given all the wars that have occurred throughout galactic history, it’s not surprising that both sides of the galactic political divide crafted armies for their defense.

It all began when the Republic created Clone Troopers to do their bidding. That all went south when those clones were corrupted and slaughtered any Jedi they saw during Order 66.

These infantry soldiers served Emperor Palpatine and his commanders. Ergo, they served Darth Vader by association.

Lord Vader had his own group of Stormtroopers known as the 501st Legion, who moved with him from the light to the dark side. In fact, it was this group that attacked the Jedi Temple, led by their long-time leader, Lord Vader.

Additionally, Lord Vader also had a special group of stormtroopers known as Darth Vader’s Guards. These guards came from the Death Trooper faction of the Stormtroopers and were reserved for special missions or protective detail.