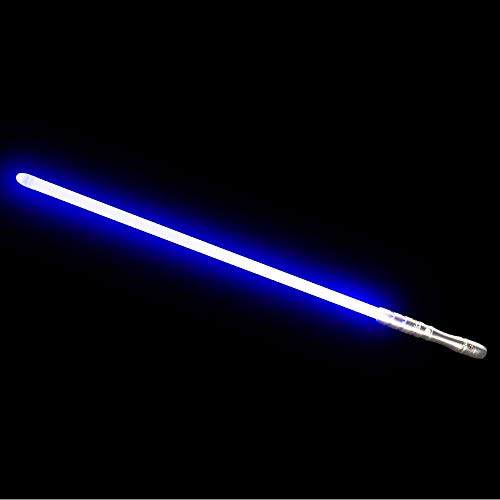 In the movies, sword-like cylindrical weapons, called lightsabers, became an attraction for the viewers. These weapons have various colors and both the Jedi and the Sith are seen fighting with lightsabers, as well as some “non-Force” users too, like Han Solo.

There was a lot of mystery surrounding the powerful weapon and who could wield them or who couldn’t during the debut of the first movie back in 1979. Over the last forty-something years, the fans have seen a number of explanations as to how a lightsaber is made, what it represents, and what its functions are.

This powerful weapon is sacred to the Jedi and users of the Force, it symbolizes their ability to protect the Order and the colors a lightsaber has represents the purpose the Jedi fights for.

The lightsaber is considered to be the weapon of a Jedi, it is a weapon that symbolizes elegance and is of a more civilized and advanced age. A lightsaber can cut through enemies, blast through metals alike.

By using the Force, a Jedi is able to deflect and predict and even reflect incoming blaster bolts. Lightsaber crystals, more commonly known as “kyber” crystals, consisted of a variety of crystals, jewels, and other things that were housed in the lightsaber’s crystal chamber as its main source of energy.

Meaning Behind the Colors of Lightsabers

Every lightsaber had a collection of crystals at its core that resonated to create the efficient, strong blade.

While the Crystal Caves in the Ilum and Dantooine systems were the most popular crystals utilized in the process, the Sith and Jedi employed a variety of crystals to generate diverse colors, special powers, and effects. Some gems have the potential to improve a user’s Force abilities.

Colored crystals and diamonds, for example, were employed only for prismatic effects. However, not all lightsaber crystals were actually crystals. Shards of glass, physical remnants, and even unique microtechnology were employed by Jedi and Sith in place of actual crystals.

The crystals of lightsabers were used to denote a chosen class of a Jedi, about 4000 BBY. A Jedi, who is a user of the Force on a more physical level, was represented by the color blue.

Green denoted a Jedi Consular, a Force user, or a Jedi who chose to ponder the secrets of the Jedi and the Force rather than engage in direct combat with the dark side.

A Jedi Sentinel is someone who has polished his or her talents in a combination of martial and academic pursuits.

Later, when most Jedi employed green or blue crystals from the Ilum caves, depending on a person’s personal preference, this distinction was lost, and the usage of crystals from other source worlds became marginal.

How Is a Blue Lightsaber Made?

A blue-colored lightsaber is produced from the crystals that are found inside the blade. These particular crystals are found on the planets Adega, Dantooine, and Ilum, in Crystal Caves.

Each of these crystals possesses unique characteristics and abilities and gives a different color. The Jedi or Sith reflects on the crystal and instills the Force in them before they are placed inside a lightsaber.

The Sith have been known to use synthetic red-colored crystals made from a special type of furnace, whereas the Jedi are known to only use natural crystals.

The synthetic crystals have vicious properties, therefore they are favored by the dark side. However, the Jedi are guided to crystals by the Force, and it plays a role in the creation of a lightsaber.

Blue Lightsabers: Who Wielded Them?

Blue lightsabers are the most common kind of lightsaber in the collection of the Jedi. Some of the wielders of this colored blade include but are not limited to:

Luke was the first user of a blue lightsaber that we ever saw in the Star Wars Universe. And while the blue lightsaber he used definitely was not his own, it was also the first-ever time we saw a lightsaber be ignited on screen

Anakin Skywalker, also known as the Chosen One, was perhaps one of the two most recognizable users of the blue lightsaber. His lightsaber was responsible for the defeat of Count Dooku and other smaller villains in the animated Clone Wars show.

Obi-Wan was Anakin’s master and friend, and was also the only person in history to defeat Anakin Skywalker in his prime after his fall to the Dark Side. Obi-Wan’s blue lightsaber has seen many an iconic moment, given his battles against Darth Vader in both Episode III and Episode IV.

These are some of the most renowned users of the Force who have wielded blue lightsabers in the Star Wars animated television series and films.

Usually, the Jedi Guardians use blue lightsabers or those who are to protect the Order from the dark side and other outside forces that can harm it. These Jedi are some of the greatest warriors that the order has to offer. They are usually those who have received extensive training in the seven forms of lightsaber combat.

Luke Skywalker’s green lightsaber was first seen in Star Wars: Episode VI Return of the Jedi, the third and final episode of the original Star Wars trilogy, released in 1983.

The lightsaber was blue in the original 1982 teaser trailer for Return of the Jedi. The choice to alter the lightsaber’s hue from blue to green was made to contrast Luke’s blade with the blue sky of Tatooine and make it more noticeable during the Carkoon conflict.

The Jedi Order has used lightsabers in every color and shade conceivable for millennia. However, following the events of the Battle of Ruusan, the majority of accessible crystals were either blue color or green color.

Color crystals in lightsabers were sometimes compressed, which resulted in a pulsing blade, or unstable, resulting in a swirling and sparkling core.

Lightsaber crystals of various colors were sometimes combined in a lightsaber to produce a new color in a blade; for example, An aqua blade was created when Galen Marek combined Rahm Kota’s green crystal with his father’s deep blue crystal.

Blue lightsabers have been used by defenders and protectors called Jedi Guardians, who were to look after the Order, and protect it from all outside malevolence.

Only the most skilled Force users have been seen using this color and among all eleven lightsaber colors, the blue one is considered to be the rarest.

What Does a Red Lightsaber Mean?