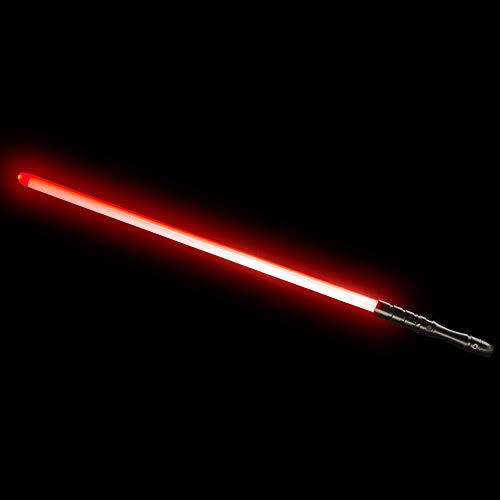 A lightsaber that is red utilizes a “bled” kyber crystal inside it. This is usually done by a Sith by dominating the crystal using negative emotions like anger and passion.

But the process does not require a Sith to perform it. Any force-sensitive individual embracing dark side emotions can bleed a kyber crystal.

What Do Red Lightsabers Symbolize?

Red lightsabers are usually the mark of the Sith.

The Sith code teaches acolytes to embrace emotions such as pain, passion, and anger. What better representation of these emotions than wielding a red lightsaber blade?

But the color of the lightsaber, while still being a true symbol of the Sith, is about more than just a reflection of the Sith teachings.

Kylo Ren, while embracing the dark side, was not a true Sith. So why use a red lightsaber blade?

What Makes a Lightsaber Red?

Inside each and every lightsaber, whether it is wielded by a Sith or a Jedi, is a kyber crystal. These crystals have an innate attunement with the force.

Unfortunately, this is a problem for the Sith and other dark side users, as this innate attunement leans towards the light side. This gives the crystals a degree of sentience, meaning they can choose their owner. And no kyber crystal wishes to pair with a Sith.

So, instead of trying to convince the crystal to work with them, the Sith choose to dominate the crystal. They infuse the crystal with all of those dark emotions the Sith code teaches them to embrace. This process actually bleeds the crystal, which is what turns it red.

Where Do the Sith Get Their Kyber Crystals?

The Jedi procure their kyber crystals from closely guarded natural caves, but where do the Sith obtain their crystals?

It is the responsibility of each Sith to bleed their own crystal and assemble their own lightsaber. This means that many Sith are also responsible for finding their own kyber crystals.

For Sith who have fallen from the Jedi Order, if they have retained their lightsaber, then they have the option of repurposing their existing kyber crystal to form their Sith lightsaber. This is what Kylo Ren does.

A Sith can also use the kyber crystal from the lightsaber of a Jedi they have slain, this is one of the more popular options. This is how Darth Vader obtained the crystal for his Sith lightsaber.

There have been instances throughout Star Wars history where Sith have attacked Jedi shipments of kyber crystals, stealing the crystals for their own purposes. On these occasions, a Sith master may gift their apprentice a kyber crystal.

After the fall of the Republic, the Sith took control of many of the Jedi’s kyber crystal caves. This allowed them to distribute the crystals amongst their acolytes with ease. They also used the crystals to power their superweapons.

Can a Jedi Have a Red Lightsaber?

It is rare for a Jedi to wield a red lightsaber.

The two most common instances of a Jedi wielding a red lightsaber include fallen Jedi, and Jedi that are battling Sith and temporarily wield the Sith’s lightsaber against them.

In the Legacy universe — everything that was removed from canon before The Force Awakens — a red lightsaber did not directly symbolize the Sith. Anybody could wield a red lightsaber, it was just one of many different colors of crystals.

What Jedi Had a Red Lightsaber?

The most common cause for a Jedi to wield a red lightsaber was in battle against a Sith.

For instance, Obi-Wan wielded Asajj Ventress’s lightsaber in a battle against Darth Maul and his brother. And Anakin used Dooku’s own lightsaber to execute him.

Another case where you might fight a Jedi wielding a red lightsaber is when they have fallen to the dark side. Instances include Anakin Skywalker, Barriss Offee, and others.

While you can claim that these individuals are no longer Jedi, some do return to the light side.

For instance, Darth Vader turned back to the light when he helped Luke defeat the Emperor.

The last lightsaber Vader used was his red one, even though he turned back to the Jedi path in the end.

In the Legacy universe, everything that is no longer canon with the release of The Force Awakens, red was a common lightsaber color used by the Sith, but it wasn’t exclusive to the Sith.

Many Jedi changed lightsaber colors frequently during their lifetime. Some Jedi who did wield red-colored lightsabers switched to a different color once the Sith came to power. Partly because they didn’t want the association, and also to avoid friendly fire during war.

Some Jedi in the expanded universe who were known to wield a red lightsaber include:

What Do Jedi Do With Sith Lightsabers?

When a Jedi kills a Sith, they fall heir to that Sith’s lightsaber. But what do they do with the lightsaber?

Usually, the Jedi will confiscate the weapon with the purpose of preventing it from falling into the hands of future acolytes.

From there, many of the lightsabers get destroyed, including the kyber crystals, which are notoriously hard to destroy.

Occasionally, the Jedi Order may hold onto a weapon if it has particular significance.

In at least one case, a Jedi has removed the red kyber crystals from a Sith’s weapon and purified them. It was Ahsoka Tano who did this after the fall of the Republic.

Ahsoka Reveals How She Turned Her Red Lightsabers to White [CANON]

Why does Leia have a red lightsaber?

In the Legends universe (also referred to as Legacy), Leia wielded a red lightsaber as a Jedi. This lightsaber was actually built and given to her by her brother, Luke.

This particular lightsaber was given to her in 18 ABY as featured in the novel Ambush at Corellia. Not much is said about the blade aside from the fact that Luke constructed it for her and that the blade color was “ruby-red”.

In the Legends universe, red lightsabers weren’t exclusive to Sith. While many Jedi chose to distance themselves from red blades during the rise of the Sith, once the Empire was defeated, there was no reason to shy away from using a red-colored blade.

Leia also owned and wielded a green lightsaber, yellow lightsaber, and blue lightsaber during the course of her life.

Why does Kylo Ren’s lightsaber flicker?

With the launch of The Force Awakens, the audience is treated to their first view of a lightsaber with a crossguard. This lightsaber, wielded by Kylo Ren, is red, has a blade that sizzles and oscillates, and features a plasma crossguard.

The reason for the unique appearance of Kylo Ren’s lightsaber stems from the crystal residing within its hilt. The kyber crystal used is cracked, but why?

The lightsaber was originally the one Ren constructed when he was a Padawan learner under his Uncle Luke’s teaching. After his fall to the dark side, he remodeled his blue-bladed lightsaber to suit his new dark side status.

By turning to the dark side, Ren would have needed to bleed his blue kyber crystal to get it to work, much like the Sith do. It is during this bleeding process that the kyber crystal cracks.

Instead of starting anew with a different crystal, Kylo Ren chooses to keep the broken crystal, using it to construct what is now an unstable blade.

The cracked nature of the crystal is what creates the flickering appearance of the blade and the need of the plasma crossguards to bleed off the extra heat generated.

Towards the end of Episode 1: The Phantom Menace, Obi-Wan Kenobi and Qui-Gon Jinn face off against Darth Maul, who is wielding a unique double-bladed lightsaber.

Obi-Wan struggles with his grief and surprise, but is able to successfully battle Maul by first cutting the double-bladed lightsaber in half and then cutting Maul in half.

While seemingly fatal, this wasn’t the end for Darth Maul.

Darth Maul’s brother, Savage Opress, rescues him and has him healed. He also brings Maul his severed lightsaber. This lightsaber still functions as a single-bladed weapon.

Darth Maul wields this single-bladed weapon in many subsequent battles, including a revenge confrontation against Obi-Wan. Eventually, he modifies the lightsaber back into his double-bladed style.

And he continues to use a double-bladed weapon from then on.

In the Legends universe, they take the history of Maul’s lightsaber one step further, saying that he started with a single-bladed weapon and only switched to a double-bladed lightsaber when he realized that he wasn’t a match for his Jedi opponent.

This double-bladed style was meant to allow him to trick his opponents. Since he could ignite each blade separately, he often lured his opponents in close before igniting the other end of the blade, taking them by surprise and leading him to victory.

Who’s Stronger: the Sith, or the Jedi?

What Does a Blue Lightsaber Mean?