You may have first encountered Ahsoka Tano in the live-action show The Mandalorian, played by Rosario Dawson. Or maybe you’ve known the character from her animated beginnings on The Clone Wars or Rebels cartoons, voiced by Ashley Eckstein

Either way, you’ve probably noticed that she fights with not just one but two lightsabers. But this wasn’t always the case.

For the first few seasons of The Clone Wars the character fought with only a single blade. This has led many to wonder where her second lightsaber came from and how exactly she came by it.

If you yourself have wondered this, read on to learn everything there is to know about every one of Ahsoka’s lightsabers.

Like all Jedi Padawans, Ahsoka constructed her own lightsaber as part of her training. She traveled to the ice planet of Ilum for a ritual known as “the Gathering” where she found her own unique kyber crystal inside the maze-like caves.

As part of the process of bonding with her kyber crystal, it took on a green color. This resulted in the green lightsaber she used at the beginning of the clone wars, when Anakin Skywalker took her as his Padawan.

So that’s the story about her first, green lightsaber. But what about her second one?

About halfway through The Clone Wars, Ahsoka started using a second, shorter blade in her off-hand. Instead of pure green, this smaller “shoto” lightsaber had a more yellowish-green blade.

This happened as part of a larger set of redesigns the show creators did for all the characters at the same time. These redesigns brought Anakin and Obi-Wan more in line with their “Revenge of the Sith” appearances, and also gave Ahsoka a more “teenaged” look.

Unfortunately, the show never told the whole story of how she came by her second lightsaber. This left fans to piece it together from what we do see in the show.

So we can assume that she somehow came by her second lightsaber between these two episodes. According to Wookieepedia, both of these episodes took place in 21 BBY, or 21 years before the Battle of Yavin.

While some have guessed that the second lightsaber was a gift from Anakin, there’s a detail in a canon novel that would suggest otherwise. In the novel Ahsoka by E.K. Johnston Ahsoka recalls that she had been to the planet Ilum a total of three times. 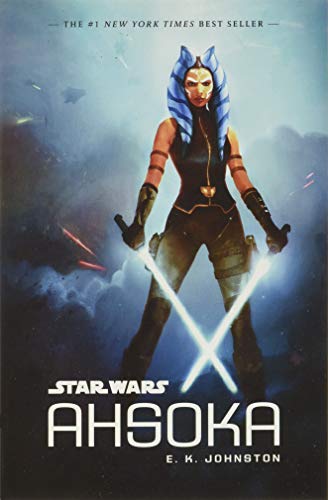 Her last visit was to instruct a group of Younglings (shown in the sixth episode of the fifth season: “The Gathering”). But the first two times she visited the planet were both to claim her own crystals.

So to put it all together, we can assume that sometime in 21 BBY, between the events of “Sphere of Influence” and “Heroes on Both Sides” Ahsoka traveled to Ilum. There she acquired her second Kyber crystal, which she then used to construct her second lightsaber.

Phew, well that settles that, right? Not exactly.

Why did her lightsabers turn blue?

In the season 5 finale of The Clone Wars, “The Wrong Jedi” Ahsoka was expelled from the Jedi Order after being framed for a crime she didn’t commit. While Anakin Skywalker would end up clearing her name, she ultimately declined to rejoin the Jedi.

By rejecting the Jedi way of life, she instead chose to go her own way. Because of this, she left both of her lightsabers behind with Anakin and the Jedi.

Since this was the last episode to air on Cartoon Network, many at the time thought this was the end of her story. But thankfully Disney+ would go on to revive the show for a seventh and final season, finally portraying Ahsoka’s role at the end of the Clone Wars.

In the ninth episode of season 7, “Old Friends Not Forgotten” Ahsoka returns to the Republic one last time. She never actually rejoins the Jedi, but Anakin does give her a very special gift before she leaves to retake Mandalore: her old lightsabers.

These “upgraded” sabers had one distinct change from when she left them behind. Rather than the green and yellow-ish hues from before, both blades now glowed bright blue.

This matched Anakin’s own saber, which led him to comment that they were “maybe a little better” than when she last left them.

Leaving her lightsabers behind for good

After winning the Siege of Mandalore, Ahsoka was on her way back to Coruscant, maybe even to rejoin the Jedi. But before she could return, Palpatine changed everything with three simple words.

The Great Jedi Purge had begun. In the ensuing chaos of her former allies trying to kill her, Ahsoka barely escaped with her life.

In the aftermath, she had no choice but to go into hiding to survive. She left her sabers by the wreckage of her crash landed ship, on top of graves of fallen clones.

She abandoned her lightsabers as a way of faking her own death. It made sure that anyone who went looking for her would assume that she had died with them.

And sure enough, Darth Vader would search that site years later. There he discovered the sabers he had gifted to her and believed exactly what she wanted him to.

What about her white lightsabers?

But wait, I hear you say, how did she leave them behind for good? Doesn’t she still have two lightsabers later on in Rebels and The Mandalorian?

Long story short: those are new lightsabers. The earlier-mentioned canon novel “Ahsoka” by E.K. Johnston tells the story of how she came into possession of these new blades.

By the time of the novel, the Empire had control of Ilum – travelling there for Kyber crystals was no longer an option. Instead, she acquired the necessary crystals from one of Vader’s Inquisitors.

After defeating the Inquisitor known as “The Sixth Brother” she took his old crystals as her own. She was then able to “heal” them, transforming the corrupted red crystals back to their natural color: a pure white.

Like her previous pair, one lightsaber was standard length and one was a shorter “shoto” lightsaber. But make no mistake, these blades are completely new and remade from the ones she used in the Clone Wars.

Since she made the hilts in a hurry from whatever scrap metal she had available, they were quite rough. Later on when she had time, she rebuilt the hilts into the curved versions that we see in the age of Rebellion.

All four of Ahsoka Tano’s lightsabers have a fascinating history, at least as far as we know. Whether it’s her first blade or her second, or her newest pair of white sabers, each of them is full of stories.

There are of course still some gaps in what the films and series have shown – but her story is far from over. With a new live-action show on the way, we’ll have plenty more to discover about Ahsoka and her lightsabers.

Only time will tell what other pieces of lore about her lightsabers are in store for us. We’ll just have to wait and see!