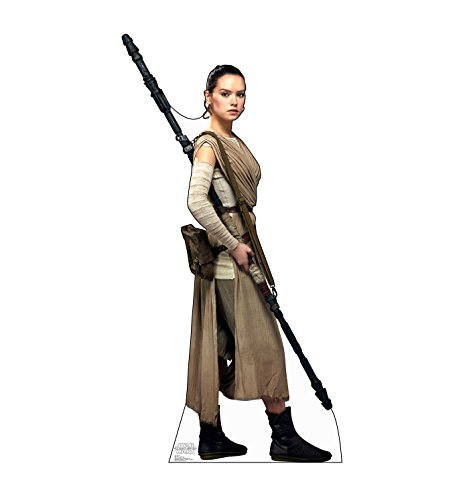 The Rise of Skywalker revealed a lot in its final scene.

After burying Luke and Leia’s old lightsabers on Tatooine, Rey surprised everyone by igniting her own lightsaber. This never-before-seen lightsaber was not blue, green, red, or even purple but bright yellow.

Many fans scratched their heads and wondered: why? What does it mean that Rey’s lightsaber is yellow instead of one of the more standard colors?

If that sounds like you, know that you’re not alone.

So strap in, because you’re about to find out everything there is to know about lightsaber colors, and what Rey’s yellow lightsaber might mean.

Where do lightsabers get their color anyway?

At the heart of every lightsaber is a kyber crystal, which focuses energy into the signature plasma blade of the classic weapon. In the process, it also gives the blade a particular color that matches the color of the crystal.

Each kyber crystal bonds with its user in a unique way, and as part of this bonding, it changes from a colorless crystal into a vibrant color. For a Jedi or other light side force user the crystal almost always changes to either blue or green, but on rare occasions it will take on another color.

Why exactly this happens, and the meaning of the different colors has yet to be fully explained in the Star Wars canon. But if you know where to look, there are clues about what different colors’ might mean.

One place to look is at other appearances in canon of non-standard lightsaber colors and what similarities their users might have. The “Legends” continuity may also provide some insight even if it’s no longer considered canonical.

After blue and green, red is by far the most common lightsaber color. This is of course due to their exclusive use by the Sith and other dark side force users.

It’s no coincidence that dark side users have red blades – there’s in fact a very specific reason for this. The reason is more than personal preference, but has to do with the nature of kyber crystals and their relationship to the force.

Kyber crystals have a natural affinity for the light side of the force, for a sith to use them they must first bend the crystals to their will. This act of domination causes the crystals to “bleed” and become corrupted, which results in the signature red blades of the dark side.

Mace Windu famously had a purple lightsaber, for reasons that were never explained in canon. Behind the scenes, the reason is very straightforward: Samuel L Jackson asked for it, and got his wish.

But even within the canon of Star Wars, Mace Windu’s blade is often seen as representative of Windu’s relationship with the force.

While he wasn’t a dark side user, Mace Windu was an adherent of the “forbidden form” of lightsaber combat: Form VII, also known as “Vaapad.” He revived Form VII as an attempt to control his own inner darkness, channeling his passion and anger without fully giving in to the dark side.

Purple is of course halfway between blue and red, and Windu’s relationship with the force is halfway between dark and light. So no matter what the reasons were in production, the color of his lightsaber represents Mace Windu and his unique style as a Jedi.

Ahsoka Tano’s second set of lightsabers glowed with a distinctive white color. Since she constructed these blades from red kyber crystals taken from an Inquisitor, they first had to be “healed”.

When Ahsoka removed the corruption from the crystals, they bonded to her and reverted to their natural colorless state. This creates the pure white lightsaber blade as seen in The Mandalorian and Rebels.

But given that all kyber crystals start out colorless, why did these revert to that state, instead of gaining a more vibrant hue? They could have been green or blue, or even yellow, why did they turn white?

According to producer Dave Filoni, they chose to give the older Ahsoka white lightsabers as a symbol of her non-affiliation. Even though she never turned to the dark side, by the end of the Clone Wars she had left the Jedi order, so it wouldn’t make sense for her blades to be blue or green.

This may have been a symbolic choice for the producers, but it would make sense for the crystals themselves to sense this about Ahsoka. The force knew that she was no longer a Jedi, but still a powerful light side force user, it could have made her blades white to reflect that.

Other yellow lightsabers in canon

In The Clone Wars cartoon, the Jedi Temple Guards used a special type of double-bladed yellow lightsaber known as a Lightsaber Pike. These guards were Jedi Knights who wore masks and identical robes, having committed their lives to serve as protectors of the Jedi Temple.

It’s never explained explicitly, but the Jedi Temple Guards are the only Jedi to use yellow lightsabers during the time of the Clone Wars. This would suggest that all yellow crystals were set aside for their exclusive use.

Another possibility is that any Jedi who had found yellow crystals as Padawans would go on to become Jedi Temple Guards themselves.

Introduced in the ongoing book series The High Republic, Loden Greatstorm was a Twi’lek Jedi Master about 200 years before the Clone Wars.

According to the official Star Wars databank he was one of the Jedi’s best teachers. It’s said that he saw every moment as a potential learning experience, to better himself as well as his Padawans.

Even though Loden became a Jedi over two centuries before Obi-Wan or Anakin, his introduction to canon was very recent. His first appearance was in the canon novel “Light of the Jedi” by Charles Soule, which was first published in 2021.

Star Wars: The High Republic #4 Reveals the History of the Drengir & their Partnership with the Sith

The connected comic book series of The High Republic introduced yet another Jedi of that era with a yellow lightsaber.

Estala Maru was a Kessurian Jedi Master known as a very skilled multi-tasker. This skill made him such an efficient administrator when he was in charge of operations on a space station known as the Starlight Beacon.

But his skills were not only in administration. In the fourth issue of The High Republic comic series: Song of the Drengir, he also used his yellow lightsaber to fight off a Drengir attack on the station.

In the Legends continuity, there were three distinct branches of the Jedi, each with a corresponding color of a lightsaber blade.

Even though these are no longer considered Canon in the Star Wars universe, they may provide clues on the meaning of lightsaber colors.

Jedi Guardians focused their skills and force powers on combat, and were the primary warriors of the Jedi. They believed martial skill was key to their main role: to uphold the laws of the Republic and defend the weak.

They would usually fight with blue-tinted lightsabers, which they saw as a symbol of solidarity among the class. In every way, the best example of a Jedi Guardian was Anakin Skywalker.

Jedi Consulars were well known for their skills in diplomacy and scholarship. Their focus was on deepening their connection to the force itself, and would do their best to draw their lightsabers only as a last resort.

When they did draw their lightsabers, it would almost always be green. Master Yoda was widely known as the most famous Jedi Consular during the time before the Clone Wars.

Jedi Sentinels saw themselves as pragmatists who balanced the strengths of the other two branches. They focused more on the life of the common people, often valuing their knowledge more than the ceremonial rules of the Jedi.

Because of this sensibility, the Sentinels made fantastic investigators, trackers, and spies. They also made up the ranks of the Jedi Temple Guards.

Like the Consulars, they would rarely draw their blades – but when they did it was usually yellow. In the Legends continuity, Kyle Katarn was the prime example of the Jedi Sentinel and what the role stood for.

So why does Rey have a yellow lightsaber?

Only the force knows the exact reason for the color of Rey’s lightsaber. But given what we know from both Legends and Canon continuities, it makes perfect sense for her character.

In canon, yellow lightsabers belonged to guards, teachers, and multi-tasking administrators. In Legends, they were used by pragmatists, who balanced the needs of combat and diplomacy with the knowledge of common people.

From a certain point of view, Rey’s lightsaber signifies all these.

To defeat Palpatine once and for all she took on the strength of all the Jedi who came before her. So like the Jedi Sentinels, her yellow lightsaber may represent her balance of all the other schools of thought that came before.

She comes from a common background, and stands as the last guard of the legacy of the Jedi. She’s also the first of a new kind of Jedi, and may be looking ahead to teaching a new generation of Jedi.

When Does Ahsoka Get Her Second Lightsaber?

How Do You Spin A Lightsaber Properly And Safely?