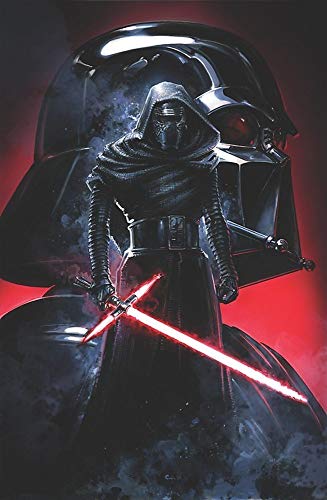 Kylo Ren, even before he fell to the Dark Side of the Force, was one of the most powerful Force users to ever exist. The raw talent in his bloodline, combined with his training, meant that his reputation preceded him wherever he went.

Why are Lightsaber forms important?

But his strength and connection to the Dark Side of the Force was not the only reason Ren was feared throughout the Galaxy. Even inside the Order of the Knights of Ren, Kylo was respected as a swordsman and for his skill with the lightsaber.

But as we know, skill with a lightsaber is not something that you can inherit. Lightsaber combat is an old and ancient art, with pre-established forms and techniques that allow you to prioritize certain aspects of combat to your advantage.

This implies that every lightsaber user had to learn at least one of the seven lightsaber forms throughout their training. But this was not the case with Jedi after the fall of the Galactic Republic and the Jedi Order.

Most Jedi (and we are talking about Luke Skywalker here) would learn an amalgamation of many different forms and develop their own. These teachings would carry on down into the future Jedi until Luke would discover the Old Jedi Texts on Ahch-To.

But before we can analyze what combat form Kylo Ren was using, we need to look into his time as a Padawan and his teachers to see what forms he could have potentially learned.

What Form did Kylo Ren learn as a Padawan?

As a Padawan, before he fell to the Dark Side of the Force, Kylo Ren was known as Ben Solo and was a Padawan in Luke Skywalker’s new Jedi Academy. It was here that he learned the initial teachings of the Force and the basics of Lightsaber combat.

It was also here that Ben Solo would construct his first lightsaber and eventually use it to destroy the Jedi Academy after Luke Skywalker’s betrayal. But, sticking to the point, Ben’s initial training with Lightsabers was under Luke’s tutelage.

This meant that Luke’s use of the Lightsaber would heavily inspire his combat form. And as we know from the Original Trilogy, Luke was but a learner when he fought Vader and defeated him.

Luke’s rough and improvised form was heavily inspired by Form V, Djem-So, and incorporated elements from both Soresu and Vapaad. This was because, like his father before him, Luke used the Force to strengthen himself throughout a battle.

On the other hand, Ben Solo took after his grandfather Darth Vader and let his combat style  become heavily reliant on heavy blows that would stagger an opponent. This used his height and build to his advantage.

These movements only became more prominent in his time as Kylo Ren and the time that he wielded his iconic crossguard Lightsaber.

So, while Ben Solo was taught variations of Djem-So and Juyo – the generalized version of Vapaad, Kylo Ren went beyond these teachings under the tutelage of Supreme Leader Snoke. His primary movements became reflective of Djem-So entirely.

What form did Kylo Ren fight with?

In his time as Kylo Ren, and later after his return to the Light Side of the Force, Kylo Ren never seemed to use one primary form in any of his lightsaber duels.

During Star Wars Episode VII: The Force Awakens, we could see him using his raw strength to try and overpower Rey. This strategy, along with the consistently heavy attacks that he was using were reflective of Form V.

This specific variation of Djem-So was used by Darth Vader during his duels with Luke on both Cloud City and inside the Death Star. It focused on heavy attacks and driving the opponent back while maintaining the advantage you have over them.

This philosophy is reflected heavily in Kylo’s use of the lightsaber against both Finn and Rey in the snow-covered forest on Ilum during their duel.

But just because his movements were heavily influenced by Djem-So does not mean that it was the only form he knew how to utilize. His mastery of the lightsaber would show in both Episode VIII: The Last Jedi and in Episode IX: The Rise Of Skywalker.

In Episode VIII: The Last Jedi, Ren was seen to show movements that were mimicked almost entirely from Form IV, Niman. This form was heavily reliant on the combatant’s ability with the Force and the ability to pull and push enemies into position.

This was showcased in the fight between Rey, Ren, and the Imperial Guards after the duo defeated Snoke. Ren, or maybe he was Ben Solo in those moments, was seen to be positioning whatever guard he was fighting into areas that would be easier to attack or defend from.

But his lack of mastery and experience with Niman was shown because he was almost killed twice during that fight and would have died had Rey not been around to distract the guards and allow him to escape.

The second form that Ren, or more accurately Ben Solo, showcased other than Djem-So was a variation of the long sweeping movements used in Juyo. This was seen in the fight between Ben Solo and the Knights of Ren in Episode IX.

Ben was also an expert in fending off multiple opponents at once, which was again an aspect taken directly from Anakin Skywalker’s variation of Djem-So.

Another aspect from Form V’s Shien that Ren showcased was the ability to deflect blaster fire with extreme skill and agility. This too was taken from Anakin/Vader’s variation of Form V.

So, our final say on the matter must be that Ren was a heavy user of Form V, and more specifically of Form V’s offensive half, Djem-So.

But we have seen that Ren was capable of utilizing strokes and movements from other Forms too, which meant that he had an in-depth knowledge of all of them and could adjust his style depending on the situation.

So, after our in-depth analysis of the way Kylo Ren uses his lightsaber in combat, we can finally tell you what form he uses.

We can see that Ren uses a hybrid of Form V, which utilized both Djem-So and Shien, Form VII, Juyo, and Form VI, Niman. This allowed for him to be unpredictable in combat, which suited both his personality and his fighting style.

Where do Red Lightsaber Crystals Come From?

The Most Aggressive Lightsaber Forms