If you’re a diehard Star Wars fan or a complete newbie to the franchise, there’s a high chance you’ve heard of Lord Vader.

Whether it’s because of his strained breathing, intimidating armor, or famously misquoted line, “No, I am your father,” Darth Vader’s allure stretches far and wide.

More often than not, watching Darth Vader’s impressive feats sparked a wave of intrigue within the hearts of fans everywhere.

In particular, many have wondered why the once great Jedi later became the notorious Darth Vader.

So without further ado, keep reading as we do a deep dive into Anakin Skywalker’s life.

Born to Shmi Skywalker, Anakin Skywalker and his mother resided on the desert-ridden planet of Tatooine.

Anakin’s conception remains a mystery as the identity of his father has not been disclosed. However, it is believed that he is the result of a midi-chlorian conception, which makes a lot of sense, but more on that later. 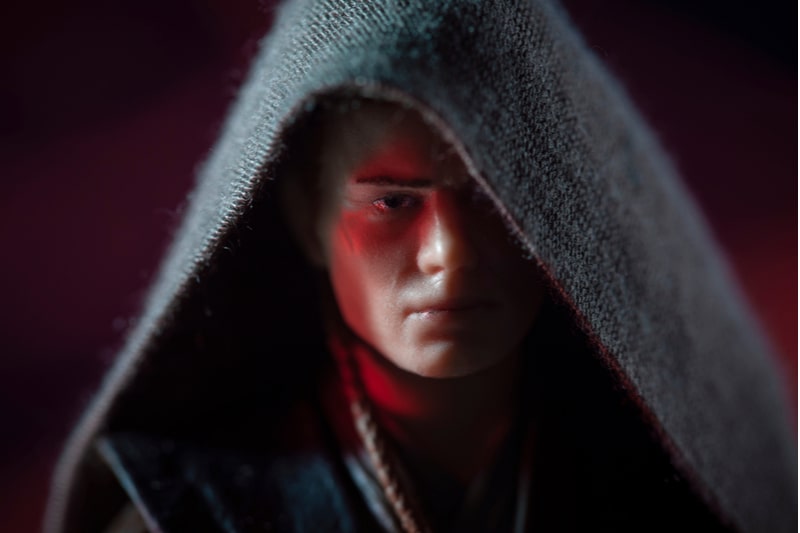 Furthermore, there has been heavy speculation that Emperor Sheev Palpatine may have been Anakin’s father, but this has not been confirmed by Lucasarts or Disney.

Anakin and Shmi did not have an easy life. They were slaves to Gardulla the Hutt until she wagered them to Toydarian, Watto when Anakin was only three. Gardulla ultimately lost the bet, and young Anakin was sent to work tirelessly in his new master’s junkshop.

Even at a tender age, it was evident that Anakin was a special child. He was already showing signs of being an exceptional pilot.

This droid was created with his mother in mind and could withstand the dry heat and sand of Tatooine. Whenever young Anakin could find the parts, he would use his fleeting spare time to work on improving C-3P0.

Young Anakin worked his fingers to the bone in Watto’s shop. One day, while throwing out some scraps, he found a power cell that was just the part he needed to upgrade his pod for an upcoming race.

Before the race, a gang (which included a Devaronian), launched an attack on the streets of Tatooine. While it is not clear why the attack happened, the gang ended up taking the generator from the town’s medical center.

This would have been a devastating loss for the community if it weren’t for Anakin. You see, Anakin worked in a junk shop where he spent his days fixing broken things. Armed with that knowledge, Anakin assessed the damage to the generator.

It was then that he noticed the generator could be repaired with the same power cell he found earlier (and was going to use in modifying his podracer).

Thus, Anakin selflessly sacrificed enhancing his pod to save the medical center. Later, when the race came around, Anakin lost because he didn’t have the power cell, but he knew he made the right choice. This just goes to show how kind-hearted the young man was.

As his life progressed on Tatooine, Anakin and his mother grew closer, spending as much time together as they could despite their circumstances.

At the age of nine, Anakin was discovered to have the highest midi-chlorian count (20,000 per cell) in galactic history.

With that, he was recruited into the Jedi Order as a Padawan. Wanting a better life for himself and his mother, Anakin bid her goodbye and left Tatooine.

All the while holding firmly to the attachment he had formed to Shmi.

Among the other Padawans, Anakin was on the older end of the spectrum, but he didn’t let an irrelevant thing like age hold him back.

Anakin was determined to be the best Jedi there was. Thus, he would train day in and day out to make that happen.

He was so dedicated, in fact, that he completed his Jedi training in a mere ten years and became a Jedi Knight at the age of nineteen. This is especially impressive given that most Padawans take twice as long to complete their training.

Anakin trained under the mentorship of Jedi Master Obi-Wan Kenobi and was on the fast track to becoming the all-powerful Jedi he sought to be. 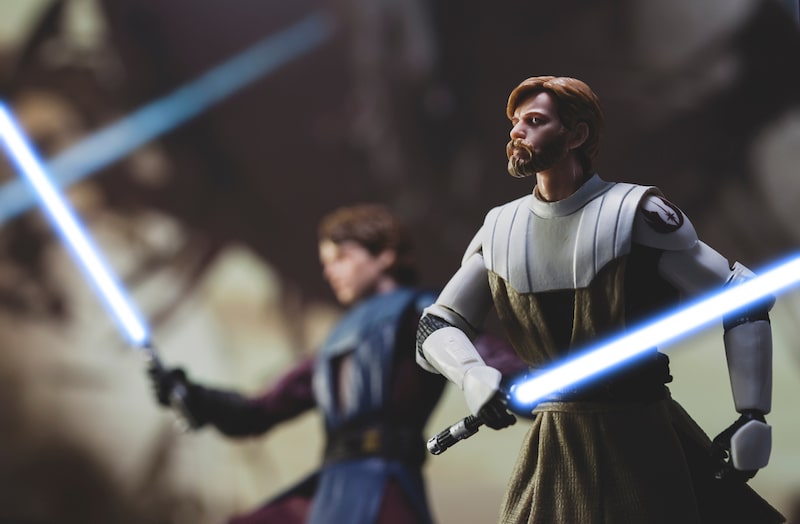 Furthermore, Anakin’s ability to hold his own against any foe was impressive, but not all that surprising considering how naturally skilled he was.

The young Jedi’s reputation preceded him, which allowed him to fight against some of the more notorious names in the galaxy.

For instance, Anakin faced off against the infamous Count Dooku, who was ultimately responsible for severing Anakin’s arm.

Still, Anakin continued to do great things and was even known throughout the galaxy as the “Chosen One.” which garnered the attention of the evil Emperor, Sheev Palpatine (Darth Sidious).

Emperor Palpatine saw Anakin as the answer to all his prayers. He knew the young Jedi would be the one to drive the Sith’s agenda for ultimate power to fruition.

All Palpatine had to do was wait for an opening and then pounce. Luckily, Anakin made this easy for him.

He had developed a bit of an ego, which is understandable considering where he came from and all the praise he was now getting. To stroke his ego even more, Anakin was the first (and only known) Jedi Knight to sit on the Jedi High Council when he represented the Emperor.

This led to him feeling entitled to things like a promotion to Jedi Master. Unfortunately for Anakin, Mace Windu, the person responsible for this promotion, greatly mistrusted him and left him as a Knight.

This mistrust was somewhat justified, as a few of the Jedi Masters could sense the underlying darkness within Anakin. Moreover, Anakin broke the Jedi Code by having emotional attachments.

The first was his emotional bond with his mother that he never let go of, and the second came about in his secret marriage to Padmé Amidala.

Why Did Anakin Become Darth Vader?

As we established, Anakin was a rebellious Jedi who did not adhere to all the rules stipulated. Thus, many believed that the rejection by Windu was what pushed Anakin into the waiting arms of the dark side.

This isn’t exactly true. Anakin was an emotional person and arguably the most important thing to him was his loved ones.

When his mother was brutally tortured and left for dead by the Tusken Raiders, Anakin’s world came crashing down around him.

He rushed back to Tatooine, where the only thing left for him to do was hold Shmi as she took her last breath.

Heartbroken and feeling guilty because he could not save her, Anakin felt a rage like he had never experienced before. He vowed to become the most powerful Force user in the galaxy to avoid a repeat of this.

Behind the scenes, Emperor Palpatine was manipulating every scenario to help Anakin see the dark side was the right place for him.

He even allowed Mace Windu to get the upper hand on him so the Jedi would be seen as the evil ones in Anakin’s eyes.

WHY Did Palpatine Lose To Mace Windu in Revenge of the Sith? Star Wars Explained

Later on, Anakin dreamt that his wife, Padmé, would die during childbirth. Panicked, Anakin was willing to do whatever it would take to prevent this premonition from being fulfilled.

This desperation to save Padmé, coupled with his newfound hatred for the Jedi Order (and the Galactic Republic), led Anakin to join the dark side.

However, despite his best efforts, Padmé still passed away after giving birth to twins, Luke and Leia Skywalker.

The cunning Palpatine convinced the former Jedi that he murdered his wife in a fit of rage. Upon hearing this, the Sith was overcome with grief, guilt, seething rage, self-loathing, and crippling depression.

All that was left for him to do was sink further into the darkness, becoming the Dark Lord we know and love, Darth Vader.

Once he fully embraced the darkness, Darth Vader was an unstoppable force.

He was so blinded by anger that he was willing to kill anyone and everyone before him. Even former friends, such as Obi-Wan Kenobi, who he ended up dueling on Mustafar. Granted, this fight ended with Vader needing full-time life support.

While bound to life support (which was the result of his severe injuries), Lord Vader slaughtered hundreds of people. Especially the Jedi during the massacre of Order 66.

Needless to say, Darth Vader was a powerhouse for the dark side. Everything from his menacing armor to his eerily calm demeanor just before a kill sent chills of fear down the spines of those in his presence.

Still, the Sith Lord had a major weakness and that was his family.

After his son, Luke, destroyed the Death Star, Vader hired bounty hunter Boba Fett to find him. He didn’t know this was his child; he just wanted to find the perpetrator and annihilate them.

When Fett returned with the name “Skywalker,” Vader began to put two and two together.

Finding out he had a child sent Lord Vader into a breakdown, where he broke a ship’s window in anger. Once he calmed down, Vader wanted to grow close to his son by bringing him to the dark side.

To do so, he tried carbon freezing Luke. What ensued was a battle where Vader, unfortunately, had to cut off his son’s hand to disarm him. Even so, Darth Vader tried to convert Luke every time they encountered each other.

Luke, holding firm to the light side, fought off these advances and faced off against his father for the last time. During this battle, the Emperor was about to kill Luke. To protect his son, Vader threw his master down a reactor shaft.

This act of love for his son redeemed the Sith and allowed him to fulfill his destiny as the “Chosen One.”

Darth Vader is one of the most interesting individuals in the galaxy. What’s more, seeing him go from a powerful Jedi to the Sith Lord, Darth Vader, is a pleasure to watch.

As a Jedi, he contested the (somewhat ludicrous) rules of the Jedi Code and held firm to his roots. Even so, Anakin’s ultimate undoing was his naivete and lack of composure when dealing with loss.

This led to him making decisions that would ultimately turn him into the bone-chillingly ruthless, cold-hearted, Sith Lord we know today.

Still, even in this state, his family was the most important thing to him, and he cared for them in his own way.

In the end, Darth Vader selflessly attacked the Emperor to protect his son. With that, Vader left the galaxy just as he came into it, as Anakin Skywalker.