Bone broth loving, extraordinarily adorable, miniature Yoda was arguably one of the best additions to the Star Wars franchise.

Grogu, also called The Child and Baby Yoda, was born Force-sensitive and was raised in the Jedi Temple alongside his fellow Jedi Initiates.

Eventually, he even became a Mandalorian Foundling.

Belonging to the same unknown species as Jedi Grand Master Yoda, there’s no wonder Grogu is often referred to as Baby Yoda.

This pint-sized ball of heart-melting cuteness was more than what meets the eye. He was rather powerful for his rank and age.

It was shown that Baby Yoda had an incredible grasp on how to use the Force with little to no training. Needless to say, Baby Yoda was quickly starting to draw attention to his skills.

Although only an Initiate, Baby Yoda was a highly sought-after commodity. So much so that there was a bounty put on his head by the Galactic Empire.

But why was it so important to get Baby Yoda? This is an important question so let’s get right into the answer.

Why Does The Empire Want Baby Yoda?

Baby Yoda was wanted by many different groups, and for good reason.

Since midi-chlorians reside in the blood, the Empire believed that Baby Yoda’s blood was the key. The key to what exactly? Well, the key to resurrection.

As crazy as it may seem, it is speculated in the Star Wars communities that Moff Gideon used Baby Yoda’s blood to aid the Sith Eternal in bringing Darth Sidious back from the dead.

Darth Sidious, also known as Palpatine, met his demise at the end of Star Wars: Return Of The Jedi.

Of course, the brief absence of his evil did not sit well with the Sith, so they did whatever they could to bring him back. This included the use of Grogu’s blood.

Why Did The Imperials Want Baby Yoda?

Even though they are essentially the Empire, just a subset of the overall body, the Imperials had another reason for wanting Baby Yoda.

While it’s understandable that they too would have wanted the return of the Emperor, Darth Sidious, they were also interested in building an army.

Yes, they could have simply done what the Galactic Republic did and created clones, however, there was one problem with that: the Force-sensitivity of the original could not be transferred to the Clones.

You read that correctly.

Dr. Pershing revealed why the Imperials wanted Baby Yoda’s blood. The plan was to inject his blood into some already-prepared host bodies to transfer his Force-sensitivity.

Pershing was able to extract a bit of Grogu’s blood before he was saved and carried out of the experiment. Luckily for the entire galaxy, the foreign blood was rejected by the bodies.

How Was Baby Yoda Saved?

Fortunately, Din had a change of heart and decided to rescue him from the Imperials. He decided to hide him, hoping for the whole chase to blow over.

Din Djarin felt so strongly for Baby Yoda that he chose to return to Nevarro to get rid of the Imperials pursuing them, just so he could be sure that Baby Yoda would be safe.

This is the point at which Baby Yoda became a Mandalorian Foundling, under Din Djarin’s newly formed clan. From there, Din was determined to return Baby Yoda to his Jedi family.

After a long, tumultuous journey across the galaxy, Din was able to track down Luke Skywalker, who agreed to look after and train Baby Yoda.

Why Was Baby Yoda So Special?

As we can see, Baby Yoda was special. So special, in fact, that people were fighting over him and willing to kidnap him just to get a drop of his blood.

But what set him apart from any other Force-sensitive?

Baby Yoda may have inherited the skills and powers of other Force-sensitive beings that came before him. This made him the first and only Force-sensitive creature to ever do that.

Naturally, when the dark side caught wind of this, their scientists were eager to experiment on Baby Yoda to see if they could somehow harness this ability.

This could have been something native to his species. Still, they did not care about the specifics and were ready to do whatever it took to get their hands on Baby Yoda.

Is Baby Yoda The Same As Yoda? 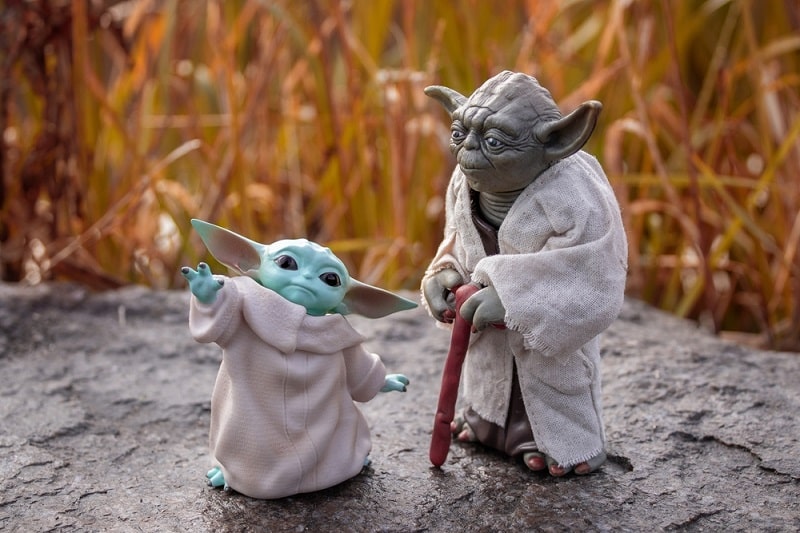 The skills Grogu possessed were reminiscent of another character that looked exactly like him, Yoda. Hence the nickname, Baby Yoda.

The similarities in skillset, understanding of the Force, and the unmistakable resemblance prompted a lot of confusion within the Star Wars fandom.

Many fans wondered whether Baby Yoda was the same as Grand Master Yoda. So to clear up this confusion, no, he was not.

Baby Yoda was not Yoda in a younger state. Also, Baby Yoda is not Yoda’s child.

The two characters are completely different and share no DNA whatsoever. The reason they have so many similarities is because of their shared species.

Baby Yoda was one of the most hunted characters in Star Wars. From the minute his abilities were revealed it seemed as though the dark side’s Forces would stop at nothing to acquire him.

This is because the Empire believed that Baby Yoda’s cells would be the answer to the transferable Force-sensitivity they were always looking for.

This meant that The Child’s life was always in some form of danger.

Luckily for him, the same bounty hunter who was responsible for handing him over to the Imperials decided to protect him until he was safely back home with his Jedi comrades.