Darth Vader is one of those characters who appear impenetrable. It appears as though Lord Vader can hold his own against any opponent he is pitted against.

He fought some of the greatest names in Star Wars, such as Obi-Wan Kenobi and his own son, Luke Skywalker. Seeing how epic these battles have been prompted fans to pit the Sith Lord against other characters.

In this article, we will be comparing Darth Vader to his grandson, Kylo Ren (formerly known as Ben Solo).

As Kylo Ren had all-powerful Skywalker blood flowing through his veins, it’s only natural for fans to wonder if he could defeat the infamous Dark Lord.

So without further ado, let’s get right into this topic. 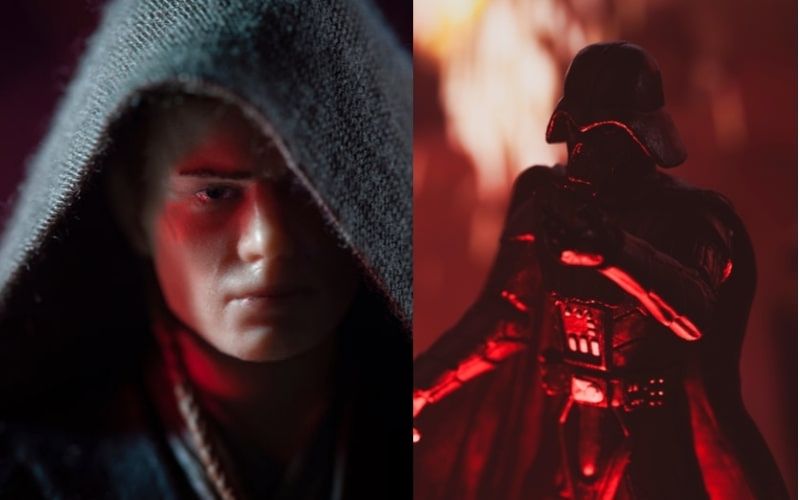 Darth Vader’s career truly took off when he was still the Jedi Anakin Skywalker.

Born on Tattoine to Shmi Skywalker as a slave (and because of his dire upbringing), Anakin longed for one thing: power.

To him, this power was the way for him to pull himself and his mother out of the poverty they lived in.

Luckily, young Anakin had the highest midi-chlorian count in galactic history: 20,000. This led to him being dubbed the “Chosen One” and joining the Jedi Order as a Padawan.

At the age of nine, Anakin was a bit old to be a Padawan, but he compensated for this with his raw talent in swordsmanship and the Force.

Thus, Anakin graduated to a Jedi Knight in an astounding ten years, when the Order’s standard was roughly twice that amount of time.

As a knight, Anakin continued to blossom. He garnered the respect of all those he came across, giving him a reputation for being one of the strongest Jedi Knights of all time. 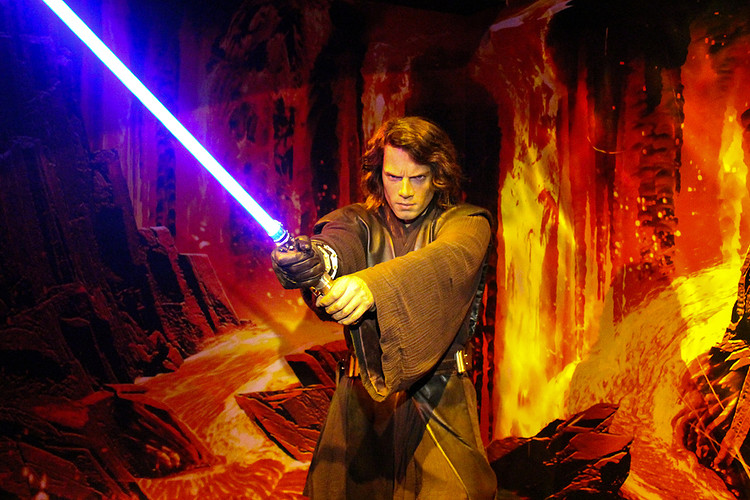 Of course, this also got Anakin unwanted attention, but more on that later.

All this attention understandably stroked Anakin’s ego. It seemed as though he felt entitled to certain things, such as a promotion to Jedi Master.

What the Jedi did not account for was the fact that he was not trusted by the man who could promote him, Mace Windu.

Mace did not trust Anakin because he felt like there was underlying darkness within Anakin Skywalker. What’s more, Anakin rebelled by turning a blind eye to specific rules in the Jedi Code.

Anakin, in particular, had formed emotional attachments, which were strictly forbidden. The Jedi believed that attachments were a breeding ground for negative emotions, which was a slippery slope to the dark side.

Even so, Anakin wholeheartedly loved his mother and formed friendships with Obi-Wan Kenobi and Ahsoka Tano. Additionally, the Jedi secretly got married to Senator Padmé Amidala.

While to us, this may not seem like a big deal, to the Jedi, this was somewhat of a slap in the face.

Of course, Anakin did exactly as Windu expected of him and sank deeply into the dark side. Anakin’s intentions were good, as he did this because he feared losing his loved ones.

He already had to hold his mother in his arms as she took her last breath, and now Anakin had a vision of his wife dying during childbirth. Because of this, Anakin was willing to do whatever it took to protect the love of his life.

Unfortunately, this made him the perfect prey for Emperor Palpatine, who manipulated Anakin into thinking the dark side was the only way to do that.

That was when gullible, emotionally distraught, rage-filled Anakin Skywalker transformed into his new role as Sith Lord, Darth Vader.

Darth Vader was one of the most powerful Sith Lords the Empire had. He had many great attributes, the first of which was his unquestionable skillset.

Darth Vader, as we briefly mentioned, has always been quite gifted. Not only did he master the art of lightsaber combat, but he also became an expert in force techniques.

Naturally, when Anakin became Lord Vader, these skills only intensified, especially since he was no longer bound by the laws of the light side.

Free of the restraints of being a Jedi, Darth Vader could fully embrace the Force in all its glory.

This is seen when he would ruthlessly use powers, such as Force Choke or Force Kill, to annihilate his victims on a whim. Of course, these were mainly used when Vader wasn’t craving the close-quarters combat of using his lightsaber. 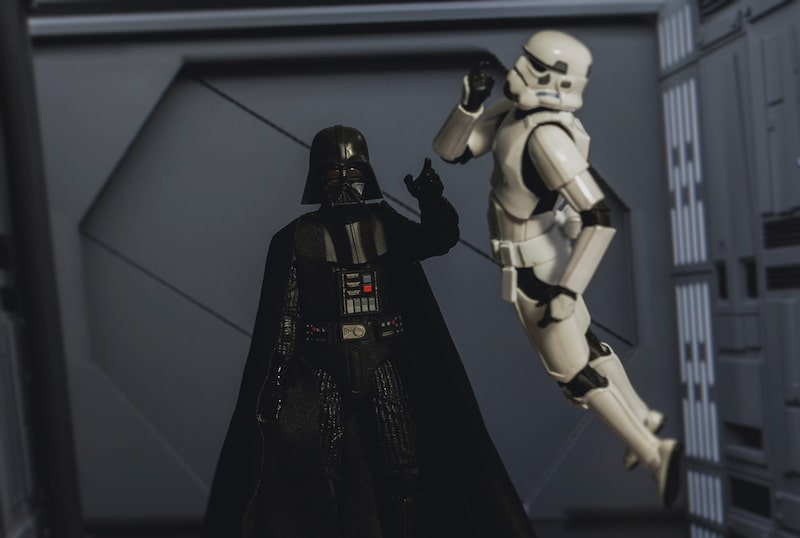 Furthermore, the Sith Lord was insanely resilient. Darth Vader sustained more injuries than any regular human would have survived. Yet, he maneuvers around as if nothing had happened.

Lord Vader lost all his limbs, suffered third-degree burns, had mangled lungs, and so many more wounds that he was dependent on a life support system.

Nevertheless, the Sith Lord still manages to be the cold-hearted, ruthlessly-outstanding villain we know and love.

Despite how unquestionably awesome Darth Vader is, he isn’t without fault.

The most major of his pitfalls is, ironically, his life support suit. Although without it, the Sith Lord would simply cease to exist, it wasn’t a walk in the park for him either. 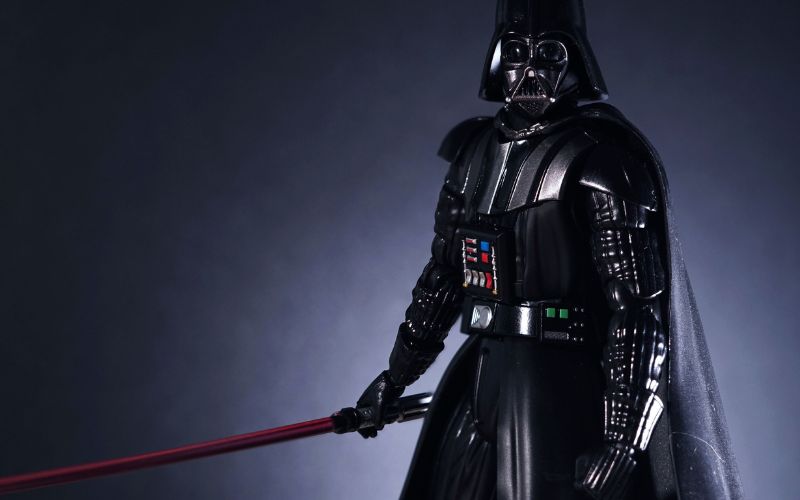 This suit was purposefully created by the Emperor to be painful and uncomfortable for two reasons.

The first is that the pain and discomfort of the suit meant that it would need consistent maintenance. Therefore, he would be dependent on the Empire and less likely to revolt.

Moreover, the constant pain, coupled with the lack of sleep and relaxation meant that Darth Vader would frequently be on edge.

Consequently, this irritability would translate into more rage and hatred, pushing Darth Vader further to the dark side.

In addition to that, the entire suit ran on electricity, which meant Darth Vader could not use Force Lightning (or he chose not to rather).

Because that technique requires a surplus of electrical energy, if Vader used it, he ran the risk of short-circuiting his suit. This would leave him with severe injuries or worse, end his life.

On a deeper level, Darth Vader was incredibly gullible, which made him an easy target for predators like Palpatine.

You see, all of Darth Vader’s goals revolved around his need to protect those he cared about, which proved he had a good heart. Hence, when the Emperor presented him with a way to do exactly that, Vader jumped at the chance without giving it a second thought. 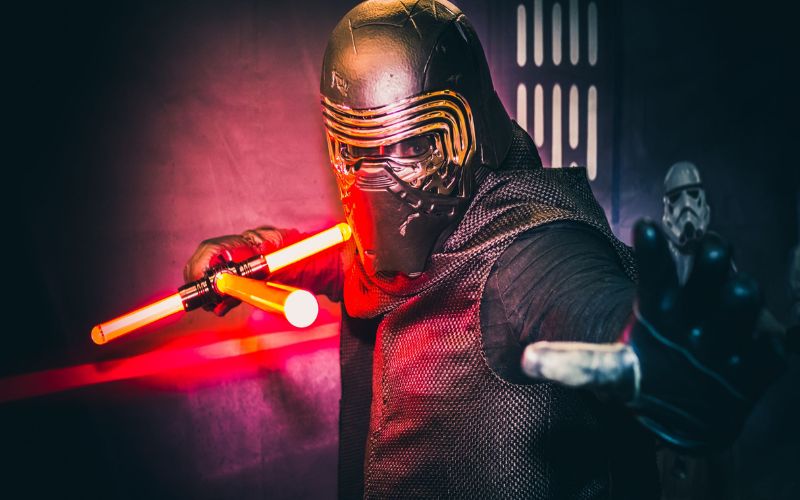 Similar to Darth Vader, Kylo Ren began his life on the light side, then turned to darkness.

Ben Solo, was born to Han Solo and Princess Leia Organa and had Skywalker blood coursing through his veins. Naturally, as a Skywalker at heart, Solo had the privilege of being trained by his legendary uncle, Luke Skywalker.

The young Jedi continued to thrive in his training, becoming stronger with each passing day. That was until 28 ABY (After the Battle of Yavin) when he had a major falling out with Luke Skywalker.

This led Solo to rebel against the Jedi (and the entire Republic at large).

Kylo Ren's Turn to the Dark Side EXPLAINED - Star Wars: The Force Awakens

It was then that he destroyed Luke’s new training temple, murdered many of his former comrades, and joined Supreme Leader Snoke on the dark side.

Solo eventually replaced the leader of the Knights of Ren and went off in a rage-fueled rampage, adopting the name Kylo Ren.

Not surprisingly, the newly initiated Kylo Ren was starstruck by his grandfather, Darth Vader. Thus, his main focus was demolishing all Jedi and amassing ultimate power over the galaxy.

He was so driven to do this, in fact, that he killed his father and master to achieve this goal. 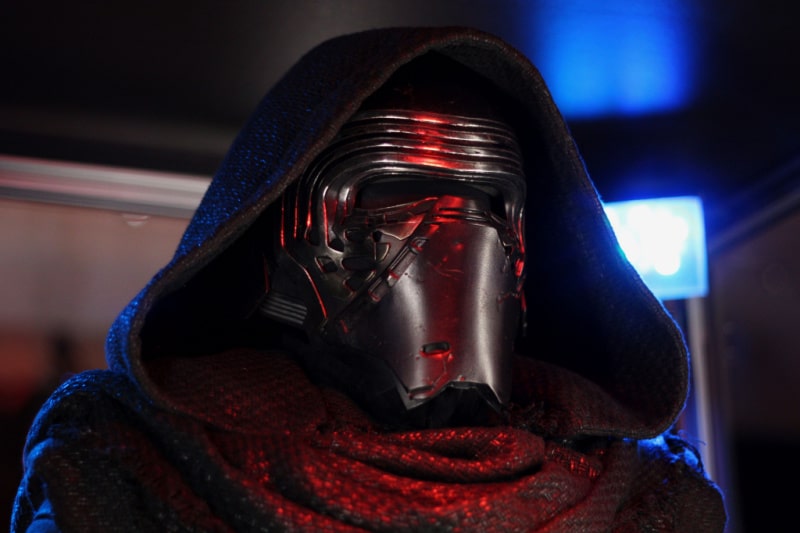 Kylo Ren possessed extensive knowledge of both sides of the Force.

Ren was so well versed in the Force that he could use virtually any force technique he wanted. He developed the ability to read minds and even freeze people without much effort.

As a result, Kylo Ren was a powerhouse. He was easily one of the most talented Jedi in the academy, and there’s no doubt he carried this passion with him to the dark side.

What’s more, Kylo Ren has the notorious Skywalker blood flowing within him. As we have seen from the likes of Darth Vader and Luke Skywalker, there is something in their lineage that gives them a natural acclimation to the Force.

Anakin (Darth Vader) was known as the “Chosen One” because of his unmistakable prowess, and Luke wasn’t lagging too far behind in terms of talent. So it’s natural that Ren would have inherited this ability.

Many fans thought Kylo Ren was weak despite his natural affinity for the Force.

In theory, this is because he personified the conflict the light and dark sides of the Force can have on a person. This made Ren extremely unstable in the force, which made him dangerous.

Because he was so dangerous, it seemed fitting that Ren would eventually become a part of the dark side. After all, the lure of the dark side is its danger, freedom to embrace rage and recklessness.

Where Kylo Ren’s weakness comes in is that he was not fully integrated into the darkness. He had internal turmoil that called a part of him back to the light side. 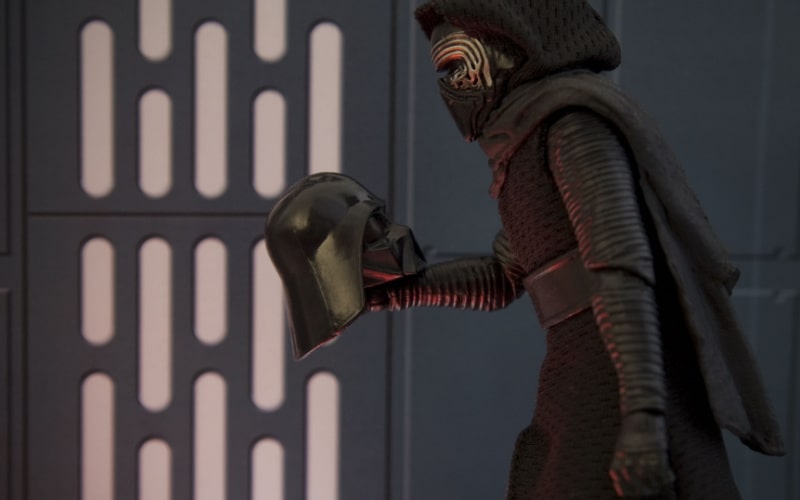 This is made evident when Ren sits with Darth Vader’s mask and says, “Forgive me. I feel it again. The pull to the light.”

While many have been seduced by the dark side (which is why the Jedi have such strict rules), Kylo was being tempted by the light side of the Force.

Therefore, as Ren was being pulled by both sides of the Force, it may be possible that he held himself back due to his internal conflict.

WHY KYLO REN CAN'T USE A LIGHTSABER - STAR WARS EXPLAINED

So bad, in fact, that he lost a battle to a stormtrooper and some Jedi who weren’t nearly as powerful as he was with the Force.

Right off the bat, we can say that Darth Vader would win this battle.

Although Kylo Ren has done some impressive feats, he can not hold a candle to the Dark Lord. Darth Vader is truly a force to be reckoned with.

Lord Vader was a master of both the Force and general combat regardless of his extensive, life-threatening injuries.

Now, Kylo Ren had the potential to reach Darth Vader’s level of vigor, but he was torn between the light and dark sides of the Force.

On the other hand, the Sith Lord did not have such an issue, as he fully embraced the darkness and fully relinquished his light side affiliation.

What’s more, Darth Vader is outstanding at lightsaber combat. Ever since his days as a Jedi, Lord Vader was one of the most talented swordsmen the galaxy had seen, whereas Kylo Ren had struggled in this area.

This means that Lord Vader would clearly have the upper hand.

Furthermore, the Sith Lord could simply use one of his more extreme Force Techniques to annihilate Kylo Ren.

Darth Vader is without question one of, if not the most powerful Force user in the galaxy. Vader is so strong, in fact, that most of his opponents suffer a severe beating when going up against him.

This would hold true for Kylo Ren.

While he was certainly powerful in the Force, Ren was conflicted. He was wavering between the light and dark side. Because of this internal turmoil, Kylo Ren had an untamed grasp of both sides of the Force.

As a result, he most likely has a naive approach to using the Force, whereas Vader is more experienced.

As a consequence, if the pair were to battle, it would be an easy win for Darth Vader, but a fight that shouldn’t be missed nonetheless.