Darth Vader is one of the most intimidating villains in Star Wars, but his own tendency for evil seems to pale in comparison to Emperor Palpatine.

Also known as Darth Sidious, the Emperor was the mastermind behind such events as Order 66 and the overthrow of the Galactic Republic. It was Sidious who groomed Anakin Skywalker from the beginning and led to him becoming Darth Vader.

This has led fans to wonder: why was Palpatine so interested in Anakin? Is it possible they had a family connection? Was Palpatine Darth Vader’s dad?

Darth Vader did not have a biological father, and Palpatine didn’t have a natural-born son; that said, the Emperor did produce several clones of himself, one of which survived to have a child of his own.

According to Star Wars Episode I: The Phantom Menace, Anakin Skywalker (who later became Darth Vader) had no father; he was conceived through the Force. However, a popular fan theory suggests that Palpatine was responsible for this conception. 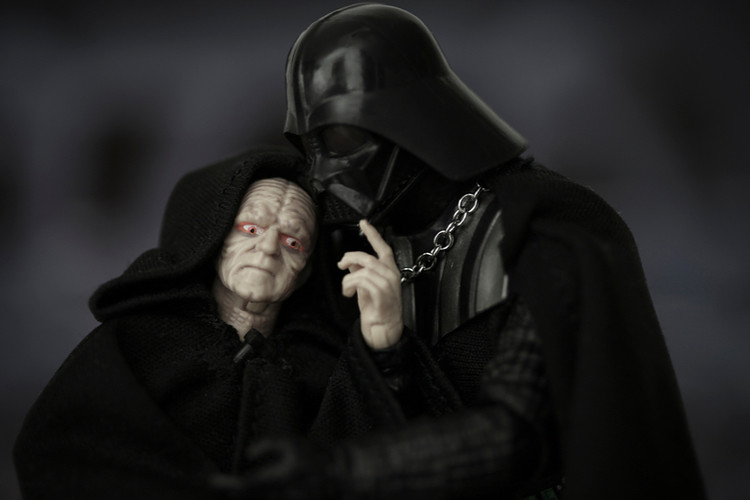 This theory was apparently given weight thanks to a Darth Vader comic that showed Palpatine surrounding Anakin’s mother, Shmi, while she was pregnant.

However, LucasFilm has since made it clear that the comic was misunderstood and Palpatine was not Anakin’s father.

So, the official canon answer to the question is that Palpatine was not Vader’s dad. They had different family trees, came from different planets, and had entirely different backgrounds.

Sheev Palpatine was born into a noble family and was from the planet Naboo. Anakin Skywalker, who later became Darth Vader, began his life as a slave on the Outer Rim planet of Tatooine.

Palpatine became interested in Anakin when he began training with the Jedi. Anakin had the highest midi-chlorian count of anyone in the universe, which gave him the potential to become the most powerful Jedi ever.

There is some thought that Palpatine groomed young Anakin over a period of years, exploiting his weaknesses and emotions to pull him to the dark side.

After 13 years, he finally succeeded, as the talented young Jedi embraced the dark side and became Darth Vader.

At this point, Palpatine was the Sith master, and Vader was his apprentice. They were not biologically related.

As mentioned above, Sheev Palpatine came from a noble family in the upper class of Naboo.

A young Palpatine made connections and learned the ways of politics and power. He climbed the ranks to become a senator not just of Naboo but of 36 planets, eventually rising to Supreme Chancellor of the Galactic Republic.

Palpatine was incredibly cunning. He secretly engineered the Clone Wars and various other events to gain more and more power over time.

No one knew of his secret identity as Darth Sidious. He destroyed the Jedi and overthrew the Republic, changing it to the Galactic Empire. 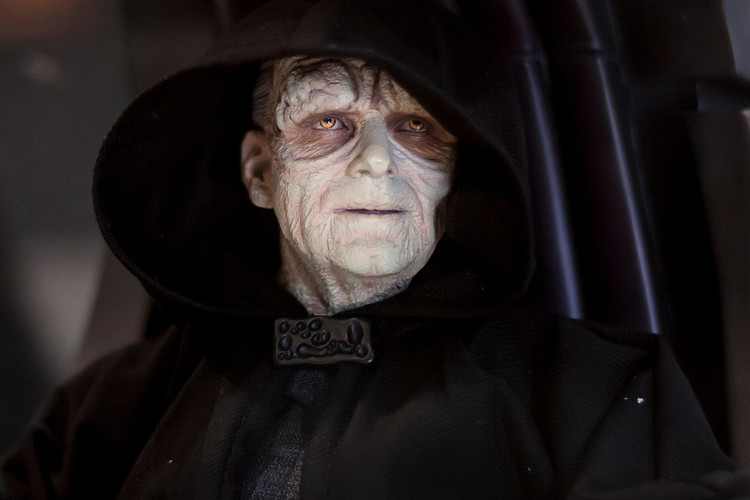 Over the next 23 years, tyranny reigned supreme in the galaxy. Palpatine’s name was largely forgotten and he became known simply as the Emperor.

During this time, he conducted various Force-enhanced cloning experiments using his DNA, determined to find a way to become immortal.

He hoped to be able to transfer his consciousness to one of these cloned bodies at the time of his death, but the experiments were almost a complete failure.

Only one of the clones survived, a genetic “son” known as “The Abomination.”

The boy had no Force powers and was rejected by Palpatine. As a result, he rejected his father and the ways of the Sith.

The boy grew to manhood and lived a normal, ordinary life, eventually taking on the name Dathan.

He married a woman named Miramir and, in 15 ABY, they had a baby who they named Rey. Being the daughter of a clone of Palpatine, Rey inherited great Force sensitivity and power.

Her parents tried to hide from Palpatine, but he eventually found them. They were able to hide Rey, keeping her out of his hands, though this act of defiance cost them both their lives.

Not knowing what had happened to her parents, Rey stayed on Jakku, dreaming they would return one day.

This is all that is known of Palpatine’s family tree. Palpatine “fathered” Dathan through experiments that merged science and dark Force powers; Dathan, in turn fathered Rey, Palpatine’s granddaughter.

It’s worth noting that during his cloning experiments, Palpatine also produced Snoke, a sort of clone-cyborg creature that shared some of his DNA.

Snoke was not as closely related to Palpatine as Dathan was, and Palpatine used him as nothing more than a puppet.

Despite his death during the battle of the second Death Star, Palpatine’s consciousness lived on in inferior clone bodies kept alive through life support and the dark side.

Palpatine kept an eye on Rey through the Force, planning to someday use her body as the host of his consciousness. However, she began training as a Jedi and became involved with the Resistance. 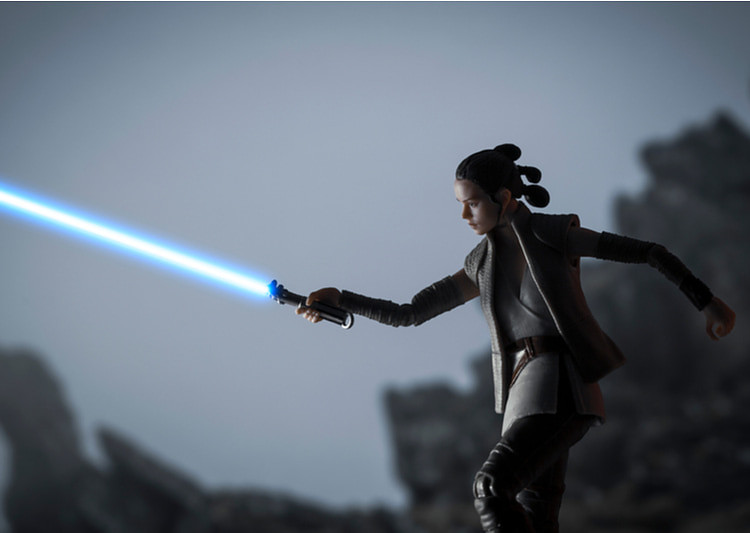 Meanwhile Kylo Ren, Darth Vader’s grandson, repeatedly attempted to pull Rey to the dark side. He eventually discovered Palpatine and Rey’s relation to him, as well as the fact that he himself was bound to her through Force dyad.

Ren told Rey about her connection to Palpatine and the fate of her parents, at last solving a mystery that had haunted her for years. But, as her strength in the Force grew, so did her recognition of the darkness within her–a darkness she feared giving into.

Ren kept the knowledge of the dyad bond from Palpatine, planning to work together with Rey to defeat him once he succeeded in pulling her to the dark side.

Things didn’t go quite as Ren planned; Rey eventually redeemed Ren back to the light side.

Reclaiming his previous identity as Ben Solo, he joined with Rey and the two of them confronted Palpatine as Jedi.

During this confrontation, Palpatine discovered their Force dyad bond and used it against them; he drained most of their combined life force to heal his own body and become excessively powerful.

Near death, Rey called on all past Jedi to assist her in defeating her grandfather. Their combined strength and Force powers allowed her to destroy him for good, but at the cost of her own life.

Ben Solo transferred the last of his own life force to her body, sacrificing himself to bring her back to life.

In the end, Rey not only defeated Palpatine and the darkness within herself, but she forsook the Palpatine name altogether. Instead, she took on the name Rey Skywalker.

Who is Darth Vader’s Father?

When Jedi Master Qui-Gon Jinn discovered the young Anakin Skywalker living as a slave on Tatooine, he spoke with the boy’s mother to learn more about him. He inquired about Anakin’s father.

“There was no father,” Shmi Skywalker said. “I carried him, I gave birth, I raised him. I can’t explain what happened.”

Given this explanation, it seems likely that Anakin was conceived by the Force, which makes sense given his impressive Force sensitivity.

Since he had no biological father, Anakin looked to his Jedi master, Obi-Wan Kenobi, as a father figure–at least, until Palpatine seduced him to the dark side and he rejected all the Jedi, including his former master.

Palpatine was not Darth Vader’s father; in fact, Vader didn’t even have a father, as he was apparently conceived by the Force.

Palpatine created a son-like clone of himself named Dathan, who in turn fathered Rey, Palpatine’s granddaughter who eventually embraced the light side and destroyed his evil consciousness forever.