When we think of Darth Vader, we may envision him approaching in a fearsome manner, or stalking after his opponent with his red lightsaber.

In the beginning of Star Wars Episode IV: A New Hope, for example, Vader marches into the Rebel spaceship with his lightsaber ready on his side. Later in the movie, he draws his lightsaber to confront Obi-Wan Kenobi in their pivotal duel.

Vader’s presence is very memorable. But you may not remember what hand he uses to fight with his lightsaber. Is Darth Vader right- or left-handed?

Based on his lightsaber fighting, Vader is right-handed. However, he is ambidextrous and uses both hands in battle.

Which Hand Does Vader Hold His Lightsaber With?

In the Star Wars movies, Darth Vader walks toward his opponents with his lightsaber on his left hip. He carries it on his left side so that he can easily reach across his waist to retrieve it.

The left hip side position is how most Jedi carry their lightsabers. Like the Jedi, Vader seeks an easy way to draw his lightsaber. And, like most Jedi, he is right-handed.

In the Star Wars movies, Darth Vader usually holds his lightsaber with his right hand.

Also, when Vader fights Luke in Return of the Jedi, Vader loses his right hand. Luke corners Vader and cuts off his mechanical hand before Luke stops fighting and asks Vader to join the Light Side of the Force.

In the Star Wars comics, Vader also uses his right hand. Darth Sidious fights this way as well. However, Sidious is ambidextrous. Perhaps Vader is too? 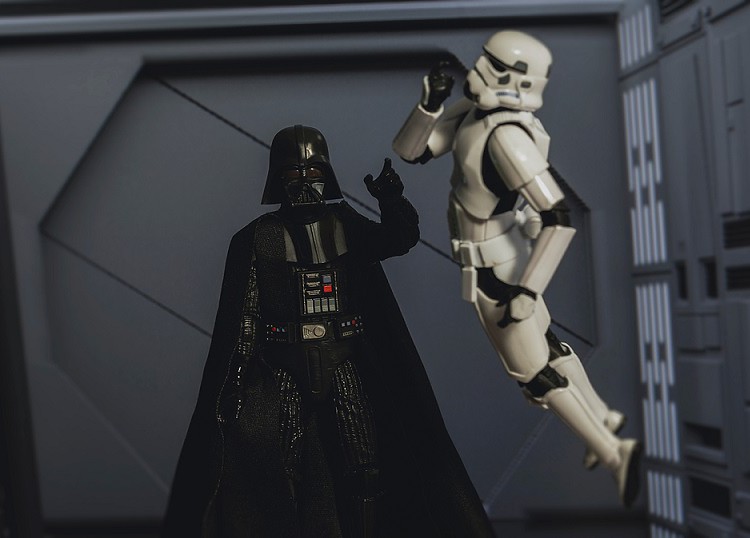 Thus, Darth Vader is ambidextrous. He uses his left hand frequently and appears to have equal abilities with both hands.

He does prioritize his right for lightsaber fighting, but he could use his left. For example, Vader used two hands in his lightsaber fight with Ahsoka Tano during the early years of the Empire.

Which Star Wars Characters Are Left-Handed?

Most of the Star Wars characters who are left-handed are Jedi. Yet, they are better described as ambidextrous.

A majority of the Sith species are left-handed. Being left-handed appears to be part of their original culture. The Sith Darth Maul is one character who carried forward this tendency and fought with his left hand.

Anakin Skywalker is ambidextrous. For example, he uses two lightsabers when he first battles Count Dooku in Attack of the Clones. He loses the fight and his right arm, and then needs to have a mechno-arm replacement.

This ability to use two lightsabers in combat is referred to as Jar’Kai. The Force-sensitive Padawan Ahsoka Tano practiced this method of fighting. So did Asajj Ventress, a dangerous assassin who worked for the Sith.

Jedi Anoon Bondara was a skilled lightsaber fighter. He used both right and left hands when fighting. Bondara became so skilled with his lightsaber that he was considered to be the best practitioner of the weapon in the Jedi Order.

Even the Grand Inquisitor fights well with his right and left hands. An ambidextrous quality runs through many characters in Star Wars.

Vader and the Jedi are Ambidextrous

Darth Vader uses his lightsaber with his right hand, but he is ambidextrous. The same can be said for most Jedi. Vader and many Jedi are not really right or left-handed.

Most Jedi use both hands, but tend to give preference to their right hand when fighting with a lightsaber.