The famous bounty hunter Boba Fett has many distinguishing characteristics. His jetpack, T-shaped visor, and menacing presence are just some of the things that make him stand out.

So too does the distinctive dent in his helmet. Ever since The Empire Strikes Back, that dent has helped define Boba as a hardened bounty hunter.

How did Boba Fett get the dent in his helmet? Boba appears to have gotten the dent from a duel, and it may have persisted because of the type of metal in his helmet. 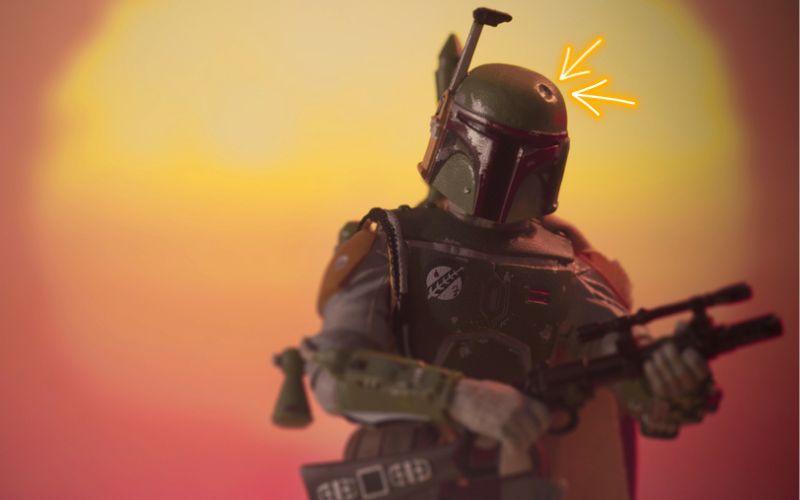 Boba Fett rose to fame while working for Jabba the Hutt and the Empire. As the top bounty hunter in Star Wars, he could have earned the dent in his helmet from his missions, including tracking down Han Solo.

Yet, the main explanation for how Boba Fett got the dent in his helmet comes from an episode of Star Wars: The Clone Wars.

Actually, it was an unaired episode where Boba faces off with fellow bounty hunter Cad Bane. This showdown ended with both Boba and Bane landing blaster shots, one denting Boba’s helmet.

This scene was from an unfinished story reel revealed at the Star Wars Celebration in 2017. Dramatically, Boba and Bane drew their guns simultaneously and shot.

Boba’s helmet is cast to the ground with a visible, smoking, fiery dent.

Cad Bane was presumed to be dead, but he returned, first in The Bad Batch and later in The Book of Boba Fett.

The series also reflects how Cad Bane served as a mentor to Boba until conflict arose between the two of them, which led to the blaster duel.

This story includes Bane having a rivalry with Boba’s father Jango Fett, how Bane trained Boba as a bounty hunter, and then forced a showdown to prove who was the best fighter.

How Boba Fett Dented His Helmet

This is a rich and interesting storyline that includes Boba coming off as a hero-of-sorts in the duel.

Yet, since this episode never aired, we may not consider this story about how Boba got his dent to be officially part of the Star Wars saga.

How was Boba Fett’s Dent Made?

The 2021 Disney+ documentary Under the Helmet: The Legacy of Boba Fett depicts the process of creating Boba’s armor and helmet.

The art director, Joe Johnston, explains how he aimed to give Boba’s helmet a battle-scarred look. Johnston molded the plastic of the helmet with a heat gun to allow for the dent.

Some sources indicate, though, that the dent was a mistake. The dent may have originated as a bubble in the helmet as it was molded that popped and left an indentation. George Lucas reportedly liked how the dent looked and kept it.

The above article also argues that because of The Mandalorian show, the dent does not make sense any longer. Boba’s helmet is supposed to be made from Beskar steel, and Bane’s shot would not have dented it.

Hence, the design of the dent may have been planned or an accident. The dent coming from Bane’s blaster may also not coincide with recent Star Wars shows.

The Mandalorian, Boba Fett, and Beskar 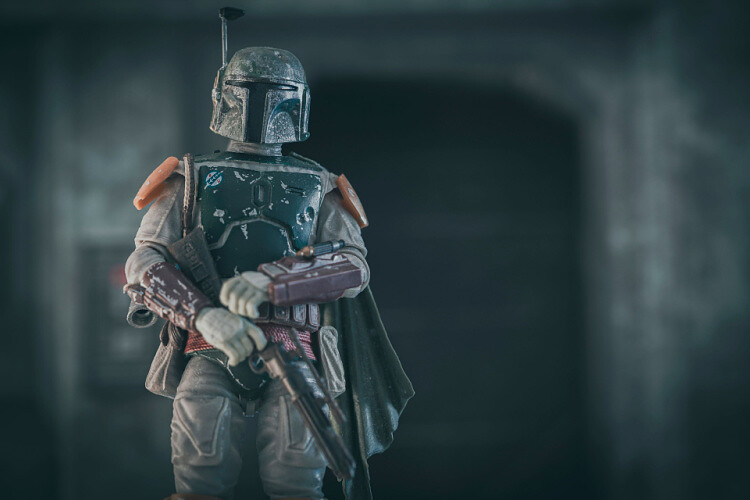 In season 2 of The Mandalorian, Boba Fett’s armor looked much better than in the past. It looked cleaner with a new coat of paint, but it still had that conspicuous dent.

Given that his armor is Beskar, why did the dent remain?

It may be that he did not melt the helmet down to reshape the dent, the way the Armorer did in this series. Or, Boba may have liked the dent and wanted to keep it.

The Mandalorian does not directly address how the dent got there, to begin with, or why it is still there.

To get a better answer to both questions, we need to refer to what type of armor Boba has.

Although The Mandalorian confirmed that Boba’s armor is Beskar, he may have also drawn on other materials, such as Durasteel, for it and his helmet.

Some sources point to Boba using Durasteel for at least portions of his armor before The Mandalorian update.

It is quite possible then that Boba had a partial Durasteel helmet when Cad Bane landed his blaster shot. That would also help explain why the dent is still there in The Mandalorian.

As some Star Wars fans have indicated, the amount of Beskar in armor could reflect the available supply of this metal, along with the status of the user.

Boba circulated throughout the galaxy as a bounty hunter for decades. He probably had to adjust and rebuild his armor from time to time.

He may not always have had access to Beskar and used some Durasteel instead, at least for his helmet.

Boba and The Book of Boba Fett

Boba and Cad Bane do another western-style duel in the season finale of The Book of Boba Fett. In the dusty streets of Mos Espa, Boba wins this time.

The fight is again close, and it looks like Boba will lose since Bane was quicker and blasted him to the ground. Yet, Boba uses his Tusken Raider staff to sweep out Bane’s legs and kill him.

By drawing these two characters back together, the show draws out central Star Wars themes: apprentice facing master (again) and heroes prevailing (now that Boba is a hero).

Boba Fett got his dent from Cad Bane and then he managed to kill him. The dent will serve as a reminder of Bane, though. And, you never know, Bane could return yet again.