Like other science fiction movies, Star Wars is based on both fantasy and reality. The blaster weapons used in the films are case in point. They blend fiction with physics.

How Do Star Wars Blasters Work? They are based on channeling particle-based energy in a similar way that laser weapons do. However, blasters actually convert plasma into bolts of energy.

How Do Blasters Work? 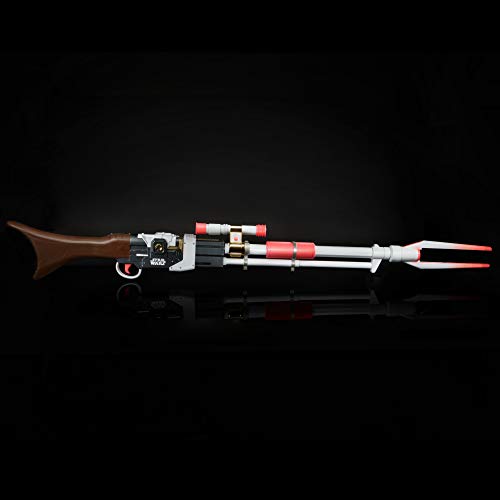 Star Wars blasters encompass a range of weapons that fire bolts of plasma. In essence, blasters work by converting energy-rich gas into bolts of particle energy aimed at an opponent.

Blasters shoot out what are variously referred to as bolts, projectiles, or blobs of plasma. These blobs could be comparable to throwing a lightsaber in chunks since they are both plasma based.

To reload a blaster, you usually need to replace the gas canister and power pack. The gas canister, or cartridge, provides about five hundred shots, while the power pack supplies enough energy for about one hundred bolts of plasma before reloading.

Blasters kind of work like laser beams but are not really lasers. In our world, you can only see lasers because the light coming from them hits dust, gas, or other vapors in the air.

Star Wars blasters bolts, on the other hand, are very visible and can be seen moving through air, even in the vacuum of space, where lasers would actually be invisible.

Likewise, laser light would have to travel at, or near, the speed of light. We would not be able to see the blaster light then, but of course we do in the movies. So, it appears that Star Wars blasters could only be plasma based.

From a physics perspective, there could potentially be two kinds of blasters in Star Wars: plasma and laser weapons. The movies do not specify, but it seems very likely that heroes and villains alike use plasma blasters.

In our world, plasma is the fourth state of matter. It behaves like a gas, but is electrically conductive and produces magnetic fields and electric currents. It flares out from stars and is used in some lights and televisions.

The Star Wars universe likewise defines plasma as “a state of matter with unique electromagnetic properties”, but associates plasma with the planet Naboo where it was mined.

Further, plasma blasters use Tibanna Gas, a substance that is located in Cloud City. This gas is compressed in the chamber of the weapon, becomes energized, and is then shot outward in the form of a plasma bolt.

Because this type of weapon is affected by electrical fields, plasma blasters tend to be less accurate. Hence, stormtroopers who notoriously miss their targets are using this type of blaster.

Laser weapons, on the other hand, work in the way that laser beams do in our world. When electrons in gasses absorb energy from an electrical current, they bounce around inside an atom. This electron activity increases the temperature of the light being emitted.

So, laser blasters could channel this energy into a form of a beam that is shot at an opponent. However, it seems that laser blasters would not actually work since the bolt fired would be too slow.

Also, the bolt would need to be a steady beam, which we do not see in the movies. We see discrete chunks of plasma-like energy shot from blasters.

The Range and Variety of Star Wars Blasters

Star Wars movies reflect a range of blaster weapons. These include pistols, rifles, and cannons.

Some weapons operate a little differently. Chewbacca, for example, uses a unique Bowcaster weapon that shoots metal projectiles surrounded by energy in a very similar way to blaster bolts.

Some weapons also are more powerful. The disruptor weapon used by Boba Fett is powerful enough to disintegrate a human.

There are also a range of colors to blaster bolts, or blobs of plasma. The colors derive from the type of gas used in the blaster.

The most common color is red, which is made from a relatively cheaper gas. The Rebels, Empire, and First Order all use red blaster bolts. The Galactic Republic and Resistance use blue, presumably also more affordable.

In contrast, Naboo Security Forces and the Starfighter Corps use the color green, reflecting a more powerful and expensive type of gas.

Nonetheless, any color of blaster bolt tends to function about the same. And, all blaster bolts can be absorbed or deflected by a variety of means.

The Ways of the Blaster

Star Wars blasters operate by converting plasma into bolts of energy and borrow from real-life science. Yet, they are science fiction in that we could not currently produce such weapons.

Since blasters are based on physics, though, It seems possible that they could be created on Earth in the future.