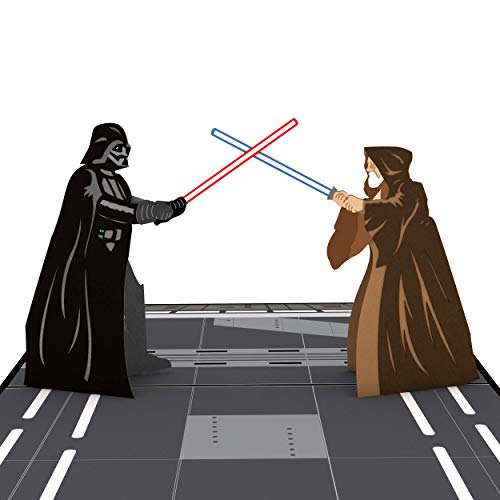 When a Jedi battles a Sith and wins, the Sith’s weapon is usually confiscated by the Jedi Order and destroyed, to prevent it from tempting anyone else to the dark side.

But what happens when the Sith wins? What does a Sith do with a Jedi’s lightsaber?

In the case of Vader battling Obi-Wan, it’s possible that Darth Vader kept the weapon, either for sentimental reasons or as a trophy. Although, the most likely scenario is that it was destroyed in the Death Star explosion. The answer is unclear, but hints throughout the storyline can help us guess its fate.

Why did Obi-Wan duel Darth Vader?

Obi-Wan, Luke, Han, and Chewbacca ended up on the Death Star by complete accident, as they initially mistook it for a moon and ended up caught in the tractor beam.

At some point during their plot to shut down the tractor beam and rescue the princess, Obi-Wan senses Vader’s presence aboard the Death Star.

Once he senses Darth Vader’s presence, he knows that there is no way that he would be able to escape the Death Star without facing Vader.

So, once Obi-Wan completes his part of the mission to disable the tractor beam, he confronts his former apprentice one last time.

Why did Obi-Wan give up the duel?

While Darth Vader prevails in the lightsaber duel, it is only because Obi-Wan Kenobi gave up. He purposely held his lightsaber up and out of the way, letting Darth Vader strike him down. But instead of a body hitting the floor, he leaves behind nothing but a robe and a lightsaber.

And in later scenes, Luke first hears Obi-Wan’s voice and then sees his apparition. This means that Obi-Wan did not simply die; he chose to become one with the force.

In fact, at one point during their duel, Obi-Wan tells Vader that “if you strike me down, I shall become more powerful than you could ever imagine.”

This leads us to believe that Obi-Wan perhaps intended to lose this lightsaber duel from the very beginning. But why?

Certainly, he could have done a better job guiding and teaching young Luke Skywalker if he remained alive instead of becoming a force ghost?

But would Luke have escaped without Ben’s sacrifice?

By engaging Darth Vader in combat, Obi-Wan gives Luke and the other’s time to evade the stormtroopers and make it back to the Millenium Falcon.

And, when the blast door unexpectedly opens, their duel draws the stormtroopers who were guarding the Falcon away from their post.

Obi-Wan (Ben) Kenobi’s ultimate sacrifice prompts the others to flee and keeps Vader distracted for a time with the whole “why is there not a body” bit.

What happened after the duel?

Luke, Leia, Han, and Chewbacca successfully flee and find their way to the rebel base along with the building plans for Death Star.

By studying the plans, they can find a weakness in the design, and they set out on a mission to destroy the Death Star.

It is during this mission that Darth Vader senses the force in Luke for the first time. But why didn’t he sense Luke when he was actually aboard the Death Star? Perhaps because Obi-Wan was using his own force-presence to shield Luke.

Using the force and Obi-Wan’s guidance, Luke can successfully take down the Death Star, with the resulting explosion sending Darth Vader in his one-man fighter spiraling out into space.

What did Vader do with Obi-Wan’s lightsaber?

Whether or not we give credit to Darth Vader for actually defeating Obi-Wan, Vader was the only one to leave the duel alive.

Vader is definitely mystified by Kenobi’s disappearance and would have likely studied Obi-Wan’s empty robe and lightsaber for some time trying to decipher the meaning of it all.

But, what ultimately happened to Obi-Wan’s lightsaber?

Star Wars canon isn’t clear on this, but in looking at the events that took place in A New Hope and the following movies, we can come up with some strong possibilities.

Darth Vader wasn’t on the Death Star by chance, it was on his orders that the superweapon navigated to and destroyed Alderaan. This means he was on this ship for some time.

Considering this, he likely had his own quarters on board, someplace he would have kept his spare black capes and such. It is likely that he took Obi-Wan’s lightsaber there and kept a close eye on it.

Or maybe Darth Vader didn’t care at all and sent the lightsaber and robe down the trash chute or handed it over to the troopers to store in whatever amounted to an onboard armory or area for contraband/everything else the imperials confiscated.

Unfortunately, if the lightsaber remained onboard the Death Star, then it was doomed. When Luke blows it up, everything on board turns to tiny pieces of shrapnel, and it is highly doubtful that any part of Obi-Wan’s lightsaber would have survived.

Possibility 2 – Vader took it as a trophy

What if the lightsaber and robe were not on the Death Star when it was destroyed?

If Vader had decided to take the weapon as a trophy, he could have kept it on his person. Meaning that it would have escaped the explosion as Darth Vader did.

It is also possible that Vader sent the lightsaber to Fortress Vader, the residence he built on Mustafar that was featured in Rogue One.

Or perhaps Vader sent Obi-Wan’s lightsaber to his new master as further proof of his skills.

Keeping the lightsaber of a well-regarded Jedi hanging on the wall like a trophy seems like something the Emperor, who built his palace on top of the ruins of the Jedi temple, would have done.

According to Legends, the stuff that was deemed non-canon with the release of The Force Awakens, Vader did indeed hold onto Obi-Wan’s lightsaber as a trophy. And kept it at a facility on Vjun.

Many years after Vader’s death, the lightsaber, along with several other Jedi artifacts, was  discovered by Luke’s students.

After an ensuing battle with some non-Sith wielders of dark side powers, the students claimed the items and turned them over to Luke and the Jedi Praxeum.

Unfortunately, with the release of the Force Awakens, the timeline and characters in this story no longer work.

But perhaps Obi-Wan’s lightsaber will be rediscovered by future acolytes of Rey?

If not for the need to protect Luke, Obi-Wan likely would have been buried with his lightsaber after dying from old age. But that is not the way the story goes.

Instead, Obi-Wan sacrificed himself, leaving his precious lightsaber in the hands of his former apprentice, Anakin Skywalker/Darth Vader.

But the question remains, what did Vader do with Obi-Wan’s weapon. Did he keep it? Did he throw it in the trash? Was it destroyed with the Death Star?

We can only make guesses.

Perhaps Obi-Wan’s lightsaber will resurface someday, to be wielded by the next generation of Jedi.

What did Anakin do with Dooku’s lightsaber

How to Fight With a Double-Bladed Lightsaber? (in Real Life)