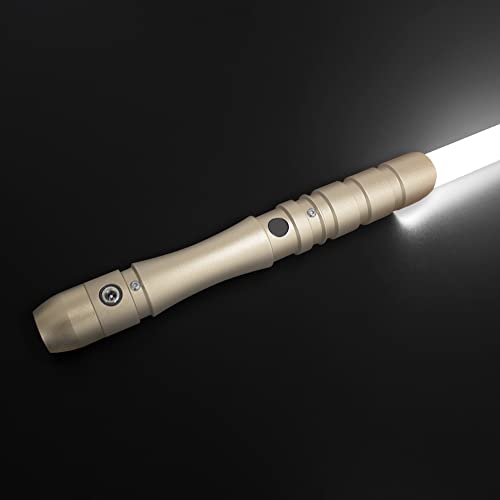 Throughout all of Star Wars and the lore that the Galaxy Far, Far Away has given us, one of the most intriguing topics is the debate and mystery surrounding lightsabers.

This iconic weapon in pop culture has left fans amazed since its debut back in 1979, and to this day it still has us wondering exactly how it functions.

And this is not without a solid cause. Even inside the Star Wars Universe, the workings and origins of lightsabers remain shrouded in mystery.

On top of that, it is no help that, over the past four decades, we have had a multitude of different examples and explanations about how a lightsaber is built, how it functions, and who can use one.

Our confusion ends up multiplied by the fact that most of these explanations have been either retconned or disproved.

But, throughout the years, there has been a consistent explanation for one singular aspect of lightsabers.

As the title of this article has given away, we are talking about white lightsabers.

Everything from its meaning, to how it was created, has remained the same since they were first introduced. But that information has been spread out over the past decade, and over many different pieces of content.

Alas, this article will be the only place you need to go to find out everything you need to know about white lightsabers.

When Was the White Lightsaber First introduced?

Technically, there are only two white lightsabers that exist in the Star Wars Universe.

And, while both belong to the Grey Jedi known as Ahsoka Tano, her unique lightsabers did not serve as the introduction of white-bladed lightsabers in the Star Wars Universe.

The first white lightsaber to ever be seen on a screen was in the TV show, Star Wars: The Clone Wars.

The second season of the show featured a three-episode arc where the Padawan Ahsoka Tano lost her lightsaber and spent almost two episodes with Jedi Master Tera Sinube while looking for her weapon.

This storyline eventually ended with Ahsoka finding her lightsaber in the possession of a bounty hunter, and then chasing the hunter through the lower levels of Coruscant. Just as the hunter was about to escape, her path was intercepted by Sinube.

The Jedi Master then unsheathed his lightsaber cane, which had seemed like a normal cane until this point. The weapon featured a white blade and caused quite a scene in the Star Wars Fandom.

At this point, the creators did not have an answer for why the lightsaber was white and what it represented, so the blade was recolored to a very faint blue.

The shade could easily be mistaken as white and was not talked of ever again.

That was until we were re-introduced to Ahsoka in the TV show Star Wars: Rebels. The former Padawan of Anakin Skywalker had acquired two new lightsabers, reminiscent of the weapons she carried throughout The Clone Wars.

The only change to these weapons was the color of the blades.

Ahsoka’s new lightsabers emitted a pure white blade, which served to highlight how she affiliated herself with neither Jedi nor Sith, and how her path was entirely her own.

How Is a White Lightsaber Made?

A white lightsaber is made the same way as any other lightsaber in the Star Wars Universe. A kyber crystal is used to power the lightsaber and focus the Force into the blade. The white blades have no special properties that set them apart from a normal lightsaber.

Then what exactly is it that makes a white lightsaber so rare and special in the Star Wars Universe?

While the lightsaber itself is not that complicated to construct, the color of the blade is the real source of complexity. This stems from the fact that, while a blue, green, or even a purple lightsaber crystal can be found naturally, a white crystal cannot.

This means that throughout the lifespan of the Galaxy, and in the history of both the Jedi and the Sith, a kyber crystal that emits a white blade has never been found naturally.

When a Jedi is killed and his kyber crystal is taken by a Dark Side user, or when a kyber crystal is found naturally by a Sith, the finder usually intends to make a lightsaber of their own.

To do this, the user uses the Dark Side of the Force to bend the crystal to their will and make it “bleed”.

This process causes the lightsaber to emit a red blade instead of the normal light side colors. The formation of a white lightsaber crystal is the exact opposite of this process.

A light side user will end up finding a red lightsaber crystal and will then use the Force to heal the kyber crystal. This in turn causes the crystal to stop “bleeding” and purifies the crystal.

The now-purified crystal ends up emitting a white blade to show that it has been healed.

Ahsoka Reveals How She Turned Her Red Lightsabers to White [CANON]

What Does a White Lightsaber Mean?

A white lightsaber usually represents a balance between the Light Side and the Dark Side of the Force.

The people who follow this path are usually referred to as the Grey Jedi. They believe that the Force is one whole entity and is not divided between the Light and the Dark.

This leads to what the white lightsaber represents.

The lightsaber, much in the way that it is made, signifies that its wielder has experienced both the Light Side and the Dark Side of the Force, but chooses to associate themselves with neither.

A blade of this color is so incredibly rare throughout the history of the Galaxy that it has had only one recorded user. This user is none other than the former Padawan of Darth Vader, Ahsoka Tano.

Throughout the Skywalker Saga, Ahsoka is believed to be the only Grey Jedi operating in the Galaxy. This was a mantle that she took on after she departed from the Jedi Order and after the end of the Clone Wars.

Her allegiance to neither side of the Force was made obvious by the white lightsabers that she chose to wield after the fall of the Republic and at the start of the Rebellion.

This choice was further emphasized during the finale of the TV show Star Wars: Rebels.

It was here that when, during her confrontation with her former Master on the Sith world of Malachor, she stated “I am no Jedi.” after being told that revenge was not the Jedi way.

Her path of non-allegiance with the Jedi Order and clear disinterest in abiding by the ethics and morals of the Jedi was made even more obvious after Dave Filoni’s statement.

As the producer for Star Wars: The Clone Wars, he told us that the lightsaber showed how Ahsoka still used the light side of the Force but did not follow the Jedi Code anymore.

Are There Any Other White Lightsaber Users?

While, hypothetically, certain Force Users can use both the Light and Dark Sides of the Force, they would end up using a certain color of the blade.

Blades were usually either red for Dark Side users, and either blue, green, or purple for users of the Light Side.

White lightsabers were exclusive to those who aligned themselves with neither the ideology of the Jedi nor the Sith.

One of the closest examples that we see of this was Mace Windu, who used the Dark Side to augment his abilities, yet still used a purple lightsaber.

So, at least in the New Canon, there are no other white lightsaber users other than Ahsoka Tano. Although in the Legends Canon, Garen Malek from The Force Unleashed video game could be made to use as a white lightsaber.

To finish up, we can safely say that the white lightsaber is undoubtedly the rarest color of lightsaber to ever exist.

This is proven by how Ahsoka Tano has been the only recorded user of this blade color in the entire history of the Galaxy.

The rarity stems not only from how the blades are extremely difficult to create, but also how they are only used by people who follow a very specific set of beliefs and ethics. All of which makes the Grey Jedi just as rare as their white lightsabers.

What Does a Yellow Lightsaber Mean?

Can Lightsaber Blades Be Curved?