May 4 Be With You is reader-supported. When you buy through links on our site, we may earn an affiliate commission. Read more.

Not for heavy dueling. Lights in the blade can be damaged when hit hard.

An affordable option for collectors looking for an authentic-looking lightsaber replica. Good solid weight and feel, but not very durable.

The Darth Vader Black Series Lightsaber is an adult collectible with many fine features. Its solid metal hilt and quality lights and sounds make it different from toys made for children. Although it is not the most authentic replica in the market, it is much more affordable than other collectibles.

Darth Vader is the first red-bladed villain to appear in the Star Wars movies. With his shadowy dark suit, his sinister mask, and his crimson-glowing blade, he awed fans the moment he appeared onscreen.

Later, fans were treated to Darth Vader’s tragic backstory. His image changed from a purely evil antagonist to a conflicted, grieved, and angry Jedi who chose the Dark Side mainly because of love and fear.

Since Darth Vader has a large number of fans, it is no surprise that toy companies release a steady stream of toys and replicas of his crimson lightsaber for sale. One of these is Hasbro’s Darth Vader Black Series Lightsaber.

Who Is the Product For?

The Darth Vader Black Series Lightsaber is an excellent choice for collectors who have started their own display of Star Wars merchandise. It promises authenticity for fans who want to know what it is like to have a real lightsaber in their hands.

This collectible is beautiful, made carefully to match real movie lightsabers. It features careful details on the hilt, a stunning red blade, and high-quality lights and sounds. It goes perfectly on a display table or shelf with other replicas and collectibles.

However, this lightsaber is not recommended for younger children. It is labeled ‘adult collectible,’ meaning that it is more for display and less for real combat. Hitting it against hard surfaces can result in some of the lights within the blade losing their function.

This collectible comes in a long box decorated with Darth Vader’s sinister image. The box is attractive in itself and can be displayed as a mint collectible if it arrives in good condition.

Inside the box is the lightsaber itself along with a set of instructions and a display stand. The saber is wrapped carefully in plastic and supported with styrofoam.

The Darth Vader Black Series Lightsaber has a beautiful hilt made out of real metal. This gives it solid weight and makes it stand out differently from toy lightsabers. The aesthetics on the hilt are carefully-done to resemble real movie lightsabers.

The blade of this lightsaber lights up with a brilliant red light. It spreads evenly from hilt to tip, which is one of its good features. The blade cannot be removed or interchanged with other removable blades.

The lightsaber produces authentic movie sounds when its blade is hit. The high quality of the sound takes users into the Galactic Empire and Darth Vader’s epic battles.

Because this collectible comes with its own display stand, it is easy to set up and show off with other Star Wars merchandise. Those who want mint collections can also display it inside its box.

The downside to this lightsaber is the textured black plastic at the hilt. The plastic is soft and robs the metal part of a little of its authenticity. Compared with other collectibles, it is more of an expensive high-quality toy than a replica.

However, the Darth Vader Black Series Lightsaber is more affordable than other collectibles. Those who want an attractive collectible without going beyond the budget can select this as a good choice that gives satisfying value for money.

On opening the box of your Darth Vader Black Series Lightsaber, carefully remove the collectible from its styrofoam support. Remove the saber from its plastic wrapping to set it up for use.

There is a removable part at the bottom of the hilt for the batteries. This lightsaber requires 3 AA batteries  that fit nicely within their sockets.

When the batteries are in and the hilt put back together, push the button at the top of the hilt to activate the lightsaber. A bright red glow will be emitted throughout the blade. Hitting the saber’s blade against other objects produces cool battle sound effects.

For those who are concerned about the textured plastic on the hilt, a nice alternative is the Star Wars Signature Series Force FX Lightsaber. This lightsaber features a more authentic metal hilt and more careful details. 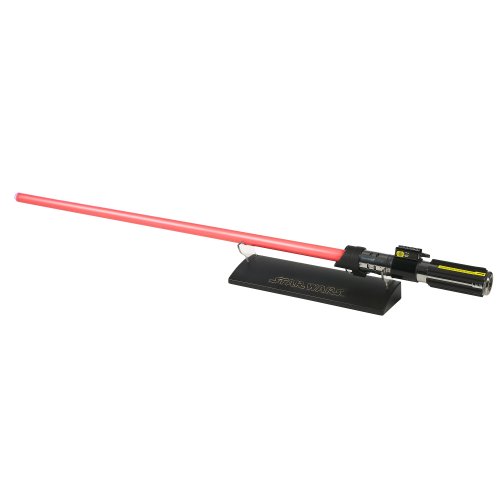 Darth Vader’s Star Wars Signature Series lightsaber is considered an official replica. It is more expensive than the Black Series Lightsaber, and it is only for those serious about collecting Star Wars replicas.

This replica comes with interesting features. The lights can be powered up or down for realistic effects. There are four different sound effects that change when detected by the motion sensors.

Those who are collecting Star Wars collectibles on a budget will love what the Black Series has to offer. More affordable than other replicas, the Black Series gives great value for money. It features heavy metal hilts, high-quality lights and sounds, and attractive aesthetics.