The meaning of lightsaber colors is a concept that’s found across all Star Wars media.

The most common colors seen are green, blue, and red. But the colors and meanings go much deeper than those.

One of the rarest lightsaber colors found is cyan, a combination of green and blue.

Where is this color found? And does the color combination extend to the meaning?

Here we’ll look at cyan lightsabers throughout Star Wars, and what they mean.

Is Cyan a Canon Lightsaber Color?

To find this color, we must know what media it exists in. The two sides of Star Wars content are Canon and Legends.

Like many things in Star Wars, Legends contains much more content outside of Canon’s restrictions. This extends to cyan lightsabers, too.

Despite the restrictions of Canon, cyan lightsabers do exist within it! They’re still a rare occurrence, though.

In Canon there is one case where a cyan lightsaber can be found: in the game Star Wars Jedi: Fallen Order.

In Fallen Order, the player controls Cal Kestis. During the game, new kyber crystals can be collected by completing puzzles on the planet Ilum.

The crystals you can collect from Ilum come in five colors: yellow, indigo, purple, magenta, and cyan.

You can use a lightsaber crafting station to switch out your kyber crystal. Using the cyan crystal will give you a cyan blade.

Because Fallen Order was produced by Electronic Arts, the game is canon. This makes Cal Kestis’ lightsaber the only canon occurrence of a cyan blade.

The universe of Legends is much broader than Canon and has fewer limitations.

The first appearance of cyan lightsabers in Legends was in the 2003 MMO, Star Wars: Galaxies. Using the “Sunrider’s Destiny” kyber crystal gives the player a cyan lightsaber blade.

Originally, the special kyber crystal was obtainable through a mission.

During a game overhaul called “New Game Enhancement” (NGE), this mission was removed. The mission’s removal made the kyber crystal highly sought by in-game collectors.

After another update, Sunrider’s Destiny became available as a rare drop from defeating enemies.

Knights of the Old Republic II: The Sith Lords

In the 2004 game Knights of the Old Republic II: The Sith Lords, lightsabers can be customized with different kyber crystal colors.

The game contains a wide range of kyber crystal colors, including cyan.

There are a handful of merchants and characters throughout the game that have the crystal. If they have the crystal, they may sell it to you or trade it for completed tasks.

There are two main ways to obtain a color crystal in the game.

The easiest method is to find a vendor who is selling color crystals. It’s not guaranteed that they’ll be carrying a cyan crystal, though.

To ensure you get a cyan crystal, the best way is through the Artificer skill.

While she was in training, Meetra defied orders from the Jedi Council and aided the Republic during the Mandalorian Wars. The Jedi Council cast her out for this act, giving her the title “Jedi Exile”.

Meetra is one of the only characters to be directly described as having a cyan lightsaber.

This description comes from the Star Wars Game KotOR II: The Sith Lords.

The blade is displayed during a confrontation between Meetra and Atris, a Jedi Master.

Atris recounts the events that caused Meetra’s banishment. Atris kept Meetra’s lightsaber after it was taken from Meetra when she was exiled.

Atris ignited the lightsaber, showing it’s cyan color, and says that she kept it to remind her of Meetra’s actions.

What Does a Cyan Lightsaber Mean?

Lightsaber blade colors have different meanings depending on what source you consult. The meanings exist within Canon, but they’re much stronger in Legends.

There is currently no written description of what a cyan lightsaber means in Canon or Legends.

By using what is known about other colors, we can speculate what cyan might mean.

Combination of Green and Blue 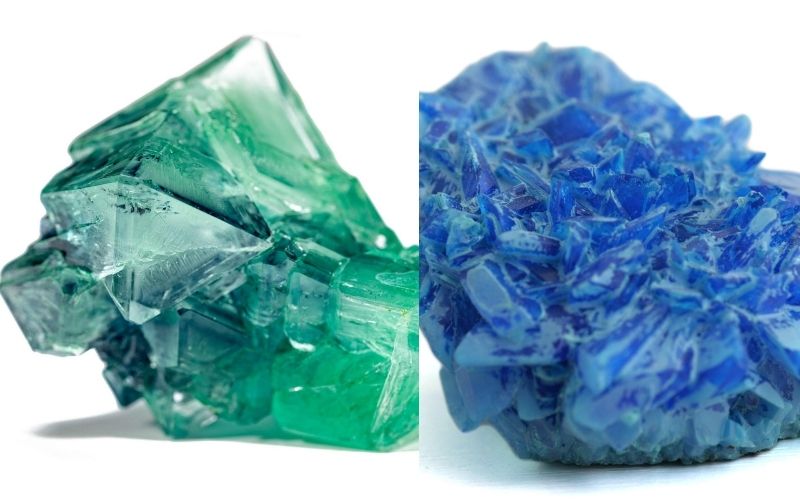 Blue lightsabers were held by Jedi who were brave and resilient in character. This color is very common because those traits are held universally by Jedi.

The combination of these two meanings would be a Jedi who was strong with the force and in spirit.

With this definition, the wielder of a cyan lightsaber would be a strong fighter and a formidable foe.

Purpose in the Jedi Order

During the existence of the Jedi Order, the color of a lightsaber often represented a Jedi’s function or rank.

Jedi Knights held green Lightsabers fighters who were crucial to the numerous battles in the galaxy.

Blue lightsabers belonged to a specialized branch of Jedi called Jedi Guardians. Their training focused on combat which was used to protect the Jedi Order.

There is no official description of what a cyan lightsaber represents, but a guess can be made from the combination of green and blue.

If the combination is true, a cyan lightsaber would represent an extremely strong fighter  dedicated to protecting and strengthening the Jedi Order.

Reflection of the Wielder

In Canon, the color of a lightsaber is representative of the force-user’s soul. Kyber crystals initially have no color; they gain it by being attuned with a force-user.

The meaning of a cyan lightsaber could be from the combination of green and blue, or  the color’s general meaning.

A combination would mean that cyan blades represent a user who is calm, collected, and strong.

If the meaning isn’t a combination, cyan’s meaning is similar yet slightly different.

On its own, cyan represents the feelings of calmness, ocean water, and peace. This could represent someone who is careful but has the capacity for change when needed.

Is Luke’s Lightsaber Blue or Cyan?

Without any comparison, Luke’s lightsaber in A New Hope appears to be cyan.

We’ve seen that only one character in Star Wars Canon has had a cyan lightsaber, Cal Kestis. So is this an oversight or discovery hidden in plain sight?

The reasons for this cyan appearance boil down to the ways the movie was produced.

Color and Correction on Film

The first Star Wars movies were made entirely on film with no digital editing. This means that any changes or edits to the original recording had to be done physically to the film.

This manual process was roughly consistent, but it didn’t guarantee the same results every time.

If the lightsaber blade was already added to the film, any changes to the coloring or brightness would also affect the blade.

With these factors combined, Luke’s lightsaber took on an inconsistent color between different shots.

His lightsaber was intended to be blue (similar to its color in Revenge of the Sith) but came out as a lighter cyan color instead.

There is another factor that makes Luke’s blade appear cyan: the reference to other colors.

When Luke ignites the lightsaber for the first time in A New Hope, he is surrounded by desaturated rock and dim lighting. The blade becomes the brightest object in the room.

This is the first time the blade is shown on screen, so we only have this one reference to what it looks like. Once we see its color here, that’s the way we’ll think about it until it’s shown elsewhere.

Because R2-D2’s blue panels are dark and saturated, it gives us a reference point for what the color blue should look like.

Compared to this, Luke’s lightsaber blade looks light and desaturated, which gives it a cyan coloring.

Cyan lightsabers are rare in the Star Wars universe, only showing up once in Canon.

The Canon appearance is in the game Star Wars Jedi: Fallen Order, where Cal Kestis can  obtain a cyan kyber crystal to use in his lightsaber.

The best reference for cyan lightsabers is in Knights of the Old Republic II: The Sith Lords.

In the game, Meetra Surik (a.k.a. Jedi Exile)’s lightsaber is kept by Atris, a Jedi Master, after Meetra’s banishment from the Jedi Order. Atris ignites the lightsaber during a confrontation with Meetra, showing off its cyan color.

The meaning of having a cyan lightsaber is blurry because there is no official explanation in Canon or Legends. The best explanation is speculative.

A cyan lightsaber likely represents a wielder who is calm and collected and has a strong bond with the force.

This description aligns well with Luke Skywalker, who appears to have a cyan lightsaber in A New Hope.

Despite this appearance, his lightsaber is canonically blue. The cyan coloring comes from how the film was edited and the comparison to colors in the scene.