Grogu, also adorably called Baby Yoda, is one of the most loved yet mysterious characters among the Star Wars communities.

Baby Yoda made his debut at the beginning of the franchise series Star Wars: The Mandalorians and has been a joy to behold.

He began as a Jedi Initiate but his skills far surpassed that of a mere Initiate. Grogu was so intensely talented with the Force that he could use various advanced Force powers.

He did so with seemingly little to no training in the Force.

Of course, this made him a highly sought-after commodity by the Galactic Empire as they probably assumed he was the first Force-sensitive clone that ever existed.

With this in mind, the Imperial scientists put a bounty out on Baby Yoda’s head so they could run experiments on him.

In the end, Baby Yoda was saved by the same bounty hunter who was to deliver him to the Imperials. What’s more, their experiment failed miserably.

Given everything we know about Baby Yoda, there are still a lot of questions we have about Baby Yoda. One frequent one being, why are his eyes black?

Keep reading as we answer this and more throughout this article.

Why Are Baby Yoda’s Eyes, Black?

Contrary to popular belief, Baby Yoda is neither a clone nor child of Jedi Grand Master Yoda.

They do, however, belong to the same species. Although this species is unknown, they do have some distinct features.

Aside from their skin tone and unique look, the three that we know of (Yoda, Yaddle, and Baby Yoda) all have a naturally strong connection to the Force.

One major difference we can see is that Baby Yoda has beautifully dark, almost black eyes. This puzzles a large number of the Star Wars fandom as this is very different from the others we’ve seen in their species.

However, this is the trademark of his species.

Like any species in our reality has a trademark for their young, Star Wars certainly has the same sort of distinguishing systems in place.

Apart from the obvious height difference, their eye colors are distinctly different, for Yoda’s species. When they are young, like Baby Yoda, they have piercing dark eyes. Often described as being black.

As they get up there in age, their eyes lighten in the process.

Why Do Grogu And Yoda Have Different Eye Colors?

As stated above, the color of an individual’s eye in Yoda’s species changes as they age. This could not be more evident when comparing Yoda and Baby Yoda.

Using them as a reference, Baby Yoda has black eyes, whereas Grand Master Yoda has eyes somewhere between yellow and green.

Baby Yoda, in contrast to Yoda, is only 50 years old. To us, this seems like many years; however, given that Yoda lived to be 900 years old, that 50 is equivalent to being a young child.

With age comes many changes and Yoda’s species is no different. For instance, Baby Yoda has massive ears as opposed to Yoda. In addition to that, the two ends of the age spectrum have different skin tones and textures to their skin.

Will Baby Yoda Have The Same Eyes As Adult Yoda When Getting Older?

Now it has been established that Baby Yoda has much darker eyes than Grand Master Yoda.

Even so, as he begins to attain an age count in the hundreds, his eyes will lighten. As far as we know, this is the norm for all beings in Yoda’s species.

But does this mean that Baby Yoda would get the same eyes as Yoda when he’s older? Yes, it does!

The standard eyes for an adult (centuries-old) are the blended, yellow-green eyes that Yoda has. With that said, it is safe to assume that Baby Yoda will have the same eye color as Yoda. 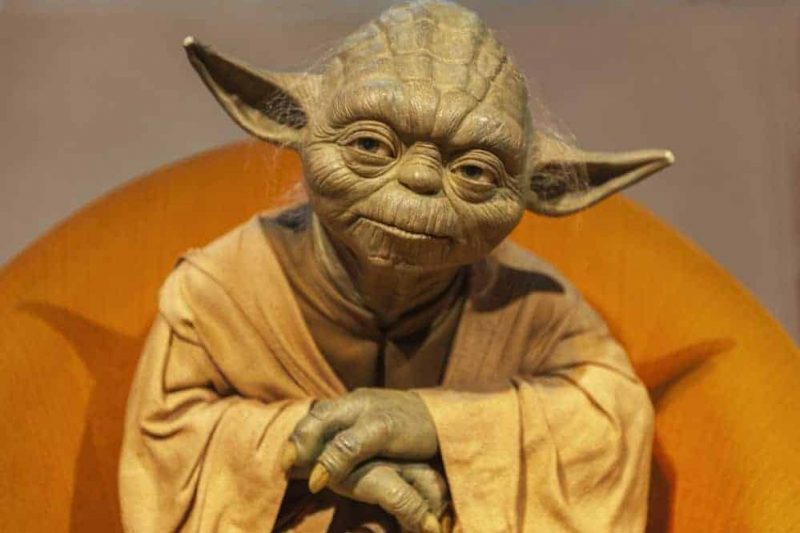 Baby Yoda is a powerful, incredibly adorable, miniature version of Grand Master Yoda. They are similar in many ways; nevertheless, they still have differences.

One major difference is the very different eye colors that they have. Be that as it may, the fact that Baby Yoda’s eyes are darker than Yoda’s is a distinct feature of his species.

As time progressed, his eyes would lighten and eventually look a great deal like Yoda.