There is nothing that shows more individuality than a person’s skin or eye color. Beautifully crafted to fit each person, it’s safe to say that there is no one else who has the same skin or eye color as you do.

Of course, George Lucas skillfully added this same touch of individuality into the Star Wars universe.

Regardless of how similar the characters would look during the franchise, they are all a bit different in their own right.

This broad array of diversity among the characters raises some questions about specific characters. Namely Grogu (Baby Yoda), and by extension, Jedi Grand Master Yoda.

So what color is Baby Yoda and Master Yoda’s skin and eyes?

Keep reading this article to find out more.

Is Baby Yoda Green or Blue? 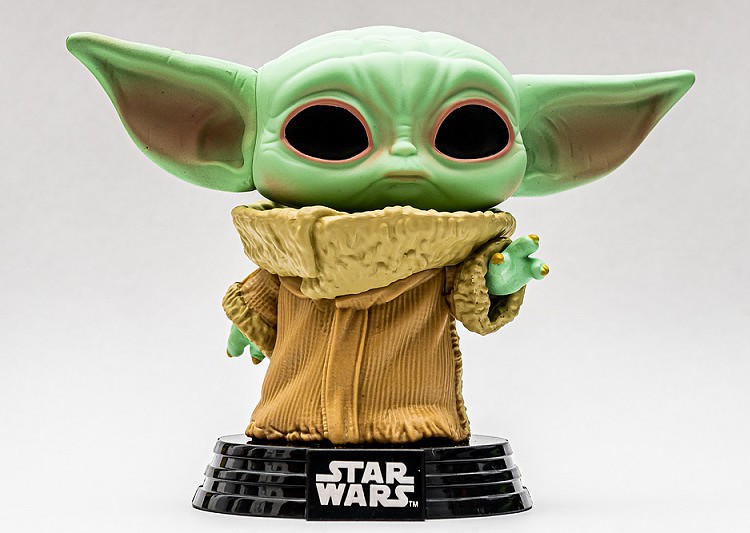 There was a dress that took the internet by storm a couple of years ago. Many people saw this dress as blue and black while others saw that same dress as white and gold.

This proved that different people perceive color and shades in different ways.

That situation is similar to how many people saw Baby Yoda’s skin color. Some saw it as green whereas others saw it as being blue.

Even so, Baby Yoda’s skin, ever since his debut in the Star Wars franchise, has been green. This green skin tone seems to be a trademark of Yoda’s species.

What Shade of Green is Baby Yoda?

Given the specific hue of Baby Yoda’s skin, it has often been confused with blue. However, his skin tone has more of an olive green tone to it.

Additionally, Baby Yoda’s skin seems to have a somewhat transparent overlay of electric green covering it with some faintly apparent blue undertones.

This skin hue that is uniquely his only adds to the adorableness that Baby Yoda displays every time he’s on screen.

What Color are Baby Yoda’s Eyes? 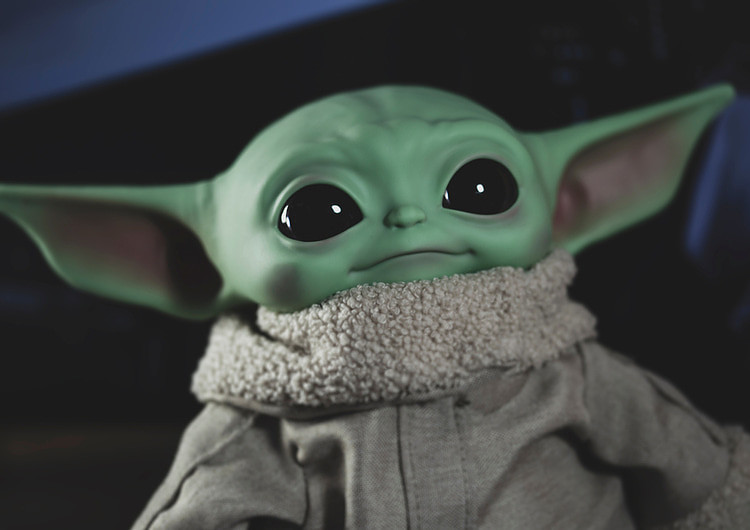 Often when speaking about Baby Yoda’s eyes, they are compared to those of Grand Master Yoda.

This raises the question, why are Baby Yoda’s eyes so different from Master Yoda’s?

Well, this solely has to do with his age. Baby Yoda’s eyes are an incredibly dark, muddy brown shade. They are so beautifully dark that they almost look black.

This is a quite common occurrence in Yoda’s species. The younger of the species have darker eye color, then as they age by the centuries their eyes lighten until they eventually become greener in hue.

Everything We Know About Baby Yoda's Species

Baby Yoda, officially Grogu, is a Force-sensitive, Jedi Initiate that has been impressing all those around him since birth.

It was evident in Star Wars: The Mandalorian, that Baby Yoda was able to use some arguably advanced Force techniques with little to no training. Techniques such as Force Healing for example.

This made Baby Yoda a highly sought-after commodity, especially by the Galactic Empire who put a bounty on Baby Yoda’s head. But why was he so important to them?

It was initially assumed by the Empire that Baby Yoda was a bio-engineered specimen and not a natural being.

The assumption that Baby Yoda was bio-engineered, as well as his strong inclination to the Force, prompted the Imperial scientists to think he would be the key to transferring Force-sensitivity.

Unfortunately for the Empire, but luckily for the rest of the galaxy, the Imperial scientists’ experiments using Baby Yoda’s blood were not successful.

What’s more, the Mandalorian bounty hunter that they sent for Baby Yoda had a change of heart and rescued him.

What Color is Yoda? 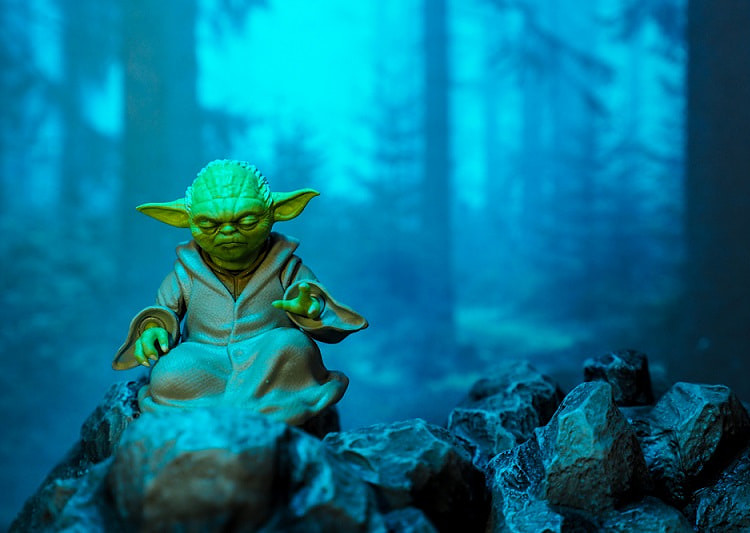 Similar to Baby Yoda, Grand Master Yoda is also green in skin color. Of course, his skin tone is different from Baby Yoda’s.

His skin is more of a light green color with a lot less blue undertones than what Baby Yoda has.

Master Yoda has more earthy, yellow tones underlining his skin. This most certainly has to do with his age.

Just like human skin, the skin in Yoda’s species changes over time, losing vibrancy, tensile strength, and other things it may have had when it was younger.

In terms of Yoda’s eye color, as mentioned before, those in his species start their life with dark, almost black eyes. As they start growing centuries older, their eyes change to a combination of yellow and green.

Jedi Grand Master Yoda was one of, if not the wisest individual in the galaxy.

He was an impressive 900 years old, and with that age, he saw many changes throughout galactic history.

Being 900 years old, Master Yoda had amassed a plethora of wisdom that no other Jedi had at that point. The wisdom that he was then able to impart on multiple generations of upcoming Jedi.

Apart from being unquestionably wise, Master Yoda was also the greatest swordsman that the galaxy has ever seen. No one, new or old, has been able to top Master Yoda’s skills in that regard.

To that end, well into his old age, Master Yoda was able to use his lightsaber to rescue Anakin Skywalker and Obi-Wan Kenobi from the grasp of Count Dooku.

Skin and eye color are some of the sure-fire signs of individuality. No two beings are made alike no matter how similar they may look at large.

Of course, Star Wars is no different. This is especially true when speaking about Baby Yoda and Master Yoda.

Baby Yoda’s many impressive feats are only made better by his unique, stand-out look.

His electric green skin, complimented by his piercing dark eyes only accentuates his small stature and cute face.

Master Yoda’s skin, on the other hand, with its more earthy, yellow tones and aged skin, clearly displays his age and wisdom.

Even though his species is unknown, it is known that as they grow older their eyes lighten to a bright yellow-green color. Which explains the lightness of Master Yoda’s eyes.