Yoda is known as a small, but mighty Jedi Master. He was born about 900 years before the climactic Battle of Endor in Star Wars Episode 6: Return of the Jedi.

Yoda became a Jedi Master at the time of the Galactic Republic, when the Jedi reigned supreme. He was short in stature, but tall in power. He appears to have been about the same height throughout his life.

But how tall is Yoda? And, how much does he weigh? The estimates do vary, but Yoda is estimated to be just over 2 feet tall, or .66 meters, and weighs roughly 28 lbs., or 13 kilograms.

How Tall is Yoda? 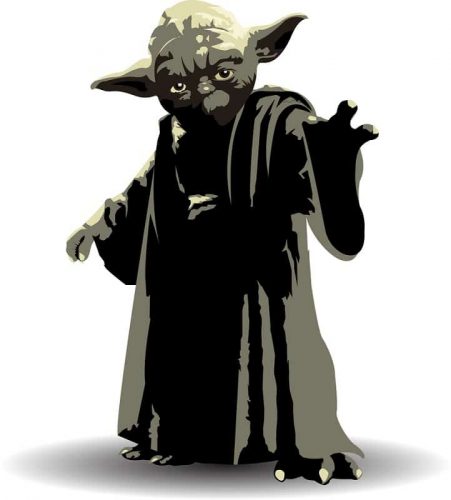 Small in stature, but large in the Force, Yoda is known for his amazing Jedi abilities. For example, his size does not stop him from outdueling his larger opponent Count Dooku during the Battle of Geonosis in Star Wars Episode II: The Clone Wars.

Or, in The Empire Strikes Back, when Yoda lifts up Luke’s X-Wing fighter from a swamp on the planet Dagobah. His size does not interfere with his use of the Force.

It is not entirely clear how tall Yoda actually is. The Star Wars site Wookieepedia lists Yoda’s height at .66 meters, or about 2 feet, 2 inches. This seems to be the best estimate.

It also coincides with another source that places Yoda at just over 2 feet in height. Based on drawings of Yoda and the puppet by Frank Oz, Yoda is 26 inches or 66 cm tall.

Hence, Yoda was small, but powerful and able to live a long time. One wonders then if Yoda’s height changed over time.

Was Yoda Always the Same Height?

It would appear that Yoda was smaller when he was younger. If we refer to Grogu, or the Child, in The Mandalorian television series, we can assume Yoda’s height at an earlier phase in his life.

Grogu is listed at .34 meters, or 1 foot, 1 inch. Since Grogu belonged to the same species as Yoda, we can estimate that Yoda was probably around the same size. We can also conclude that Yoda probably followed a similar growth pattern.

By checking drawings again, we can see the comparative height of Grogu and Yoda. Grogu is shown at 16 inches, or 40.5 cm, while Yoda is scaled next to him at 26 inches, or 66 cm. This provides an indication that Yoda grew as he got older.

Hence, Yoda was not always 2 feet, 2 inches. When he was younger, he was probably closer to 1 foot.

When Yoda came to the end of his life at age 900, we can assume he lost some of this height. For example, in Return of the Jedi, he looks smaller than his normal height when he speaks with Luke Skywalker for the last time.

STAR WARS - THE RETURN OF THE JEDI - YODA'S LAST WORDS

How Much Does Yoda Weigh?

A scientific article provides an estimate of Yoda’s weight by first figuring out Luke’s weight. This article, also posted on Wired.com, focuses on the scene in Star Wars Episode V: The Empire Strikes Back when Luke balances Yoda on his foot while doing a one-armed handstand.

This piece ultimately concludes that this negative mass means Yoda must have been using the Force to keep Luke and himself balanced. Interesting, but this does not provide us with a very helpful estimate.

The main source for Star Wars knowledge specifies that Yoda weighs 13 kilograms, or 28.6 lbs. This seems to be an average over a lifetime.

Since Yoda lived for 900 years, there must have been some variation.

Did Yoda’s Weight Change Over His Lifetime?

Just like humans, Yoda’s weight must have varied with age. We can safely assume that he weighed less than 25 lbs at a younger age.

We can look to Grogu, or the Child, from The Mandalorian to check these estimates.

Grogu is stated to be about 50 years old, he is also an infant.

How is Baby Yoda 50 Years Old The Mandalorian STAR WARS

His weight is not clearly specified, but we can safely say that he is a little more than half of Yoda’s weight, based on the height dimension.

So, the Child is about 6 kg, or 13 lbs. As a younger version of Yoda, Grogu gives us a sense of what Yoda’s weight may have been.

Small, but Strong With the Force

Yoda Lifted the Most Weight of Any Force User

Although small in height and weight, Yoda commands the Force like no other Jedi.

We can say that he was about 2 feet tall and weighed about 29 lbs for much of his life. While he appears to have shrunk toward the end of his life, he never lost his strength with the Force.