Han Solo caused quite a stir when he appeared to Kylo Ren toward the end of The Rise of Skywalker. Since Han was not Force-sensitive, it left many wondering whether he was a Force ghost. And if so, you may wonder how he can be a Force ghost without being Force-sensitive.

The truth is, there is no way Han Solo could be a Force ghost.

In The Rise of Skywalker, he appeared as a memory from within Kylo Ren, who was trying to find redemption. When Kylo confronted the memory and forgave himself for killing Han Solo, he returned to the light side.

What is a Force Ghost? 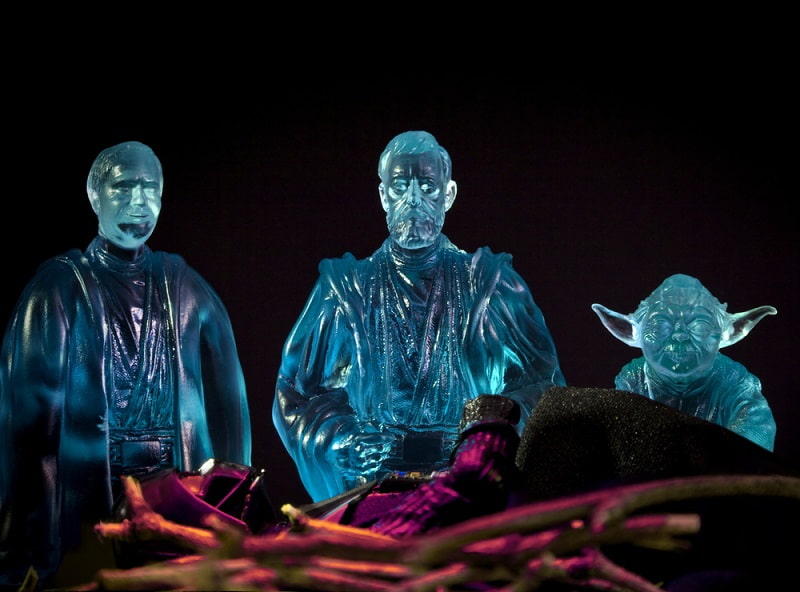 In Star Wars, certain Force-sensitives can manifest themselves as Force ghosts after they die. This allows them to talk to and guide living Jedi in certain situations. We first saw this occur in the Original Trilogy, when Obi-Wan returned to talk to Luke and Yoda.

We also saw the Force ghosts in action during the Sequel Trilogy, with Luke Skywalker, Leia Organa, and Yoda appearing. Becoming a Force ghost is not easy, and the Jedi who accomplish the feat have to be trained.

A Jedi can only become a Force ghost if they accept and embrace death while simultaneously keeping their individuality. Most Jedi do not take this route, as they become one with the Force, letting it fully consume them.

Force ghosts do not allow this total consumption, although they still pledge allegiance to the Force in death. By existing as a Force ghost, they stand between the Force and the physical universe.

Not All Force Ghosts are the Same

When you watch Star Wars, you may notice that some Force ghosts take on a more solid appearance while others are more translucent. The Sequel Trilogy gave us a great example, as Yoda appeared to be solid.

He was also able to influence the physical world, something we saw when he burned down the Jedi library in The Last Jedi. However, before Rey declared herself as Rey Skywalker, Luke and Leia’s Force ghosts took on the translucent appearance.

It is important to remember that Yoda had become a Force ghost in 4 ABY, while Luke and Leia did so in 34 ABY and 35 ABY. When Yoda first appeared as a Force ghost during the ending scenes in Return of the Jedi, his appearance was also translucent.

Ditto for Anakin Skywalker and Obi-Wan Kenobi. This implies that Force ghosts may, in time, learn how to take on a more solid form and manipulate physical objects, as Yoda did.

Becoming a Force ghost is not easy, and only a few Jedi have completed the feat. The most well-known Force ghosts include Qui-Gon Jinn, Obi-Wan Kenobi, Yoda, Anakin Skywalker, Luke Skywalker, and Leia Organa.

We know training to become a Force ghost initially started with Qui-Gon Jinn, who trained through the Force Priestesses, as we found out during The Clone Wars.

These beings were connected directly to the Force, and they existed to serve as the connection between the Living and Cosmic Force. However, Darth Maul killed Qui-Gon in 32 BBY, which placed a massive roadblock in his training.

Yoda and Obi-Wan, however, completed their training, and they were able to manifest in the Original Trilogy. Since Qui-Gon died before completing his training, he could not immediately manifest.

His only manifestation occurred during The Clone Wars when, on Mortis, given the realm’s ability to augment the Force, the realm gave him enough power to show himself. Qui-Gon, however, eventually manifested on his own, having trained long enough in the Force to attain the ability.

This also occurred around the time that Obi-Wan Kenobi was rekindling his Force connection, which further allowed him to see and fully communicate with his old master.

Process of Becoming a Force Ghost

While Qui-Gon and Yoda learned from the Force Priestesses, there are implications that this is not the only way for one to manifest as a Force ghost. We know that when Qui-Gon appeared to Obi-Wan, the former looked ready to teach Obi-Wan the process.

Whether Obi-Wan trained through the Force Priestesses, as Qui-Gon and Yoda did, or if Qui-Gon himself taught Obi-Wan will remain a mystery.

How could there be other ways? We simply need to look toward Anakin Skywalker. Anakin never trained to return as a Force ghost, but his sacrifice during the climax in Return of the Jedi, which simultaneously allowed him to fulfill the Prophecy of the Chosen One, was good enough. 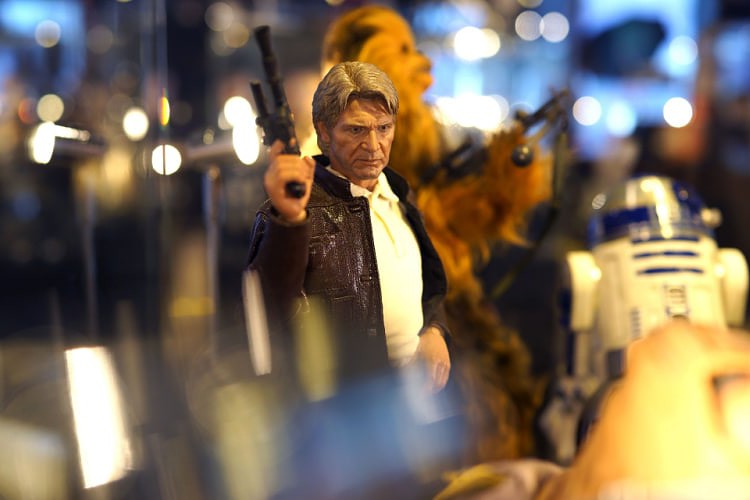 Therefore, many Star Wars fans had questions regarding The Rise of Skywalker. During Kylo Ren’s meeting with Han Solo, some speculated whether Han could also forge a path to immortality. The short answer is no, Han Solo could not.

The only way for Han Solo to have become a Force ghost would have been if he was born a Force-sensitive like his wife Leia and his son. So what was Han Solo in that scene during The Rise of Skywalker? He was nothing more than a memory projection.

We also know Han Solo did not return as a Force ghost because, since he was not Force-sensitive, he could never have properly trained to become one. And when he appeared in Kylo Ren’s memory, he did not possess the appearance of a Force ghost.

Instead, Han was solid. And while some Force ghosts, like Yoda, also appeared to be solid, Yoda still had a transparent blue outline surrounding him in The Last Jedi. Han had none of this. This relegated him to being nothing more than a memory manifesting from inside Kylo Ren.

Memory, Not a Force Ghost

Han Solo’s encounter with his son is almost a repeat of their interaction during The Force Awakens. In that scene, Kylo Ren implies he’s not strong enough to return to the light side, and ends up killing his father.

After the tragic scene, it became a memory that disturbed Kylo Ren since he committed the act. In The Rise of Skywalker, Ren had to forgive himself for killing Han, as it was the only way he could truly return to the light side.

This forced Kylo Ren to look deep within himself, and it’s where his conversation with Han came from. Kylo Ren even confirmed this point when he told Han, “you are just a memory”.

Only Force-sensitives who embrace the light side of the Force can become Force ghosts. Qui-Gon Jinn, the first Force ghost in Star Wars Canon, trained under the Force priestesses, as did Yoda.

While we know that, through Anakin Skywalker’s ability to become a Force ghost, training under the Force Priestesses is not a requirement, it still doesn’t eliminate the prerequisite that one must be Force-sensitive to return as a Force ghost.

Knowing this, Han Solo did not appear to Kylo Ren as a Force Ghost in The Rise of Skywalker. Since he was not Force-sensitive, Han could not become a Force ghost. Instead, he was a memory that Ben had to confront to return to the light side.